“Saville despises the bolts of velvet and silk that her father loves- he’s always prized them more than he’s ever loved her. Yet when he’s struck ill, she’ll do anything to survive, even donning boys’ clothes and begging a commission to sew for the king.

Piecing together a fine coat is far simpler than unknotting court gossip about an army of giants led by a man who cannot be defeated. And they’re marching toward Reggen to seize the throne. But Saville knows giants are just stories, and no man is immortal.

Then she meets them, two scouts as tall as trees. She tricks them into leaving, but tales of the daring tailor’s triumph quickly spin into impossible feats of giant-slaying. And mere stories won’t deter the Duke and his larger-than-life army.

Now only a courageous and clever tailor girl can see beyond the rumors to save the kingdom again.” 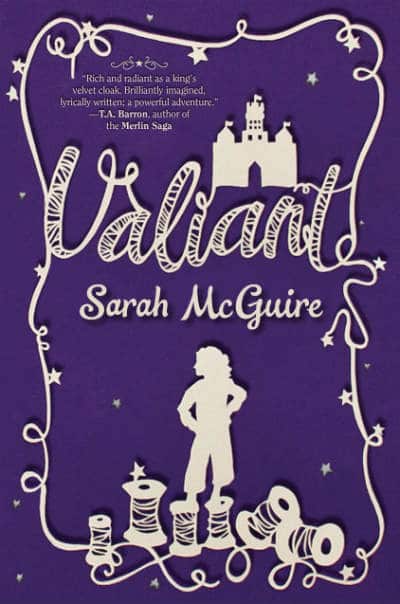 I love fairy tale retellings, so it thrilled me to discover a book that didn’t twist Cinderella or Beauty and the Beast. Instead, Valiant cleverly spins the familiar tale, “Brave Little Tailor,” with a unique fantasy/feminist and very romantic bent.  I adored it.

In Valiant, meet 17-year-old Saville. She’s got a crappy father and an even tougher existence when he turns gravely ill. With no mother and no one around to help, Saville must depend on herself. Thankfully, she has the tailor skills of her father and dresses up as a male apprentice. It’s a clever ruse, one the King falls for. Soon, he hires her to make him a fine coat.

RELATED | YA Book Review: The Princess Companion – A Romantic Retelling of ‘The Princess and the Pea’

But things get even crazier for our crossdressing Saville when giants with an evil Duke leader threaten to take over the city. And when Saville outsmarts the giants to save Will, a young boy she had taken in, the “male” tailor gets hailed a hero and rewarded in marriage to the King’s sister. Kind of bad news for someone trying to maintain her secret. It’s all very Shakespearean in a children’s literature kind of way.

Well, knowing that she didn’t actually kill the giants as the townspeople have stated and that she’s not actually a boy, Saville tells the truth. But who can she trust in the royal court? And how can she stop the evil Duke, especially when she sees good in the giants that everyone else so fears?

What I liked about Valiant is not only Sarah McGuire’s imaginative re-imagining of a fairy tale but that Saville is such a rich and complex character. Reading Valiant, you will feel her pain over an uninterested and dying father. And you will root for Saville to succeed thanks to her endearing empathy for others and intelligence. With an internal strength of character rather than physical, Saville’s kindness to help a starving boy will tug at your heartstrings.

And, speaking of the heart, the romance between Saville and Verras, a cousin of the King, plays out beautifully. The love story achieves an emotional complexity not often seen in children’s literature. I love these two’s adorable old-fashioned romance and I think you will too.

Overall, despite a slow beginning, fans of Robin McKinley, Shannon Hale, and Gail Carson Levine should read Valiant when they get a chance.

Where To Read: Valiant is available for purchase at your local bookstore, online shop, or on Amazon.

Our romance-themed entertainment site is on a mission to help you find the best period dramas, romance movies, TV shows, and books. Other topics include Jane Austen, Classic Hollywood, TV Couples, Fairy Tales, Romantic Living, Romanticism, and more. We’re damsels not in distress fighting for the all-new optimistic Romantic Revolution. Join us and subscribe. For more information, see our About, Old-Fashioned Romance 101, Modern Romanticism 101, and Romantic Living 101.
By Autumn Topping on November 1st, 2017