Have you ever wanted your own unicorn? Perhaps, you dreamed about brushing the unicorn’s beautiful hair or riding one in a mystical forest (Just me?). If you’re in the same category as me (or our protagonist Kit) who once longed to meet a unicorn (or maybe even a fairy), then Unicorn Store is the film for you.

Unicorn Store is a whimsical Netflix original indie film about hope, imagination, and being your true self even if that goes against the crowd. The movie follows Kit (Brie Larson) who grows up in a dream world. She loves glitter, unicorns, and art. But then she, unfortunately, becomes an adult and soon must face the harsh reality of the real world.

One day, after a bunch of snooty male art professors pan her unicorn bright-like rainbow art, Kit has nothing going for her. So, she moves back home and joins the mundane, dullsville real world of temp office jobs. She must become like everyone else. Plus, Kit has to find a way to make everyone happy including her parents played by Joan Cusack and Bradley Whitford.

Thereafter, Kit changes her bright clothes (the costumes here are outlandishly awesome) to appropriate grays and blues. Boring, right? But then a miracle happens. She receives a letter inviting her to a special store. As it turns out, it’s the Unicorn Store. She meets a mysterious and eccentric salesman (played perfectly by Larson’s Captain Marvel costar Samuel L. Jackson) who promises her a real-life unicorn. She just has to create a fitting home and have a loving family atmosphere. 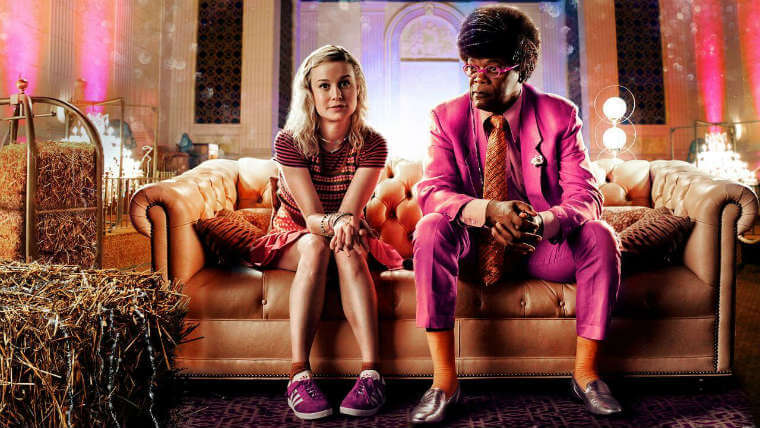 Kit being Kit believes him and turns to the sweet hardware guy Virgil to help build a place for a unicorn to actually live in her backyard. Believing in this magical unicorn transforms Kit into her true self. She wears bright colors again and finds inspiration at work, even if the workplace is a misogynistic nightmare.

As a unique individual with no friends, Kit soon finds romance with Virgil (who appreciates her unicorn-like individuality) and makes a couple of friends along the way. They believe in her and soon Kit believes in herself, accepting her own quirks, glitter and all.

In all, I’ve never seen a movie so unabashedly embrace pink glitter, rainbow power, and unicorns, something so many of us girls loved as children. Personally, I found this choice immensely charming.

I also liked that Unicorn Store is more than just about self-esteem, it’s also about faith. Are unicorns actually real? Is the salesman just a conman? Or has Kit gone completely crazy? Kit and the audience must ask these questions before the end, leading up to what I find to be a very satisfying ending. But I won’t give it away…

Unicorn Store, Brie Larson’s directorial debut film, makes you believe in magic and unicorns in a sweet, endearing way. She tells you to accept your childlike wonder and embrace your imagination proudly. I further appreciated the wonderful casting of Virgil as the romantic lead. He isn’t your typical romantic comedy choice and I loved that. Mamoudou Athie is both authentic and sweet here and you’ll fall in love with him every bit as much as Kit does.

That all being said, Unicorn Store definitely won’t be for everyone. The film targets a very specific audience which might be too niche for some. Furthermore, the film can also be slightly self-indulgent and I did want a little more romantic development (despite the cuteness) and a tad more emotion. I wanted to feel more in a few transformative scenes. Nevertheless, if you go in with the right attitude ready to return to your childhood imagination and dreams, you’ll have a good time. Unicorn Store truly is an adorable film full of whimsy for anyone who ever believed in unicorns.

Did you ever have your own dreams about unicorns? What do you think about Unicorn Store? Sound off below…

Our romance-themed entertainment site is on a mission to help you find the best period dramas, romance movies, TV shows, and books. Other topics include Jane Austen, Classic Hollywood, TV Couples, Fairy Tales, Romantic Living, Romanticism, and more. We’re damsels not in distress fighting for the all-new optimistic Romantic Revolution. Join us and subscribe. For more information, see our About, Old-Fashioned Romance 101, Modern Romanticism 101, and Romantic Living 101.
Pin this article to read later! And make sure to follow us on Pinterest.
By Autumn Topping on April 9th, 2019