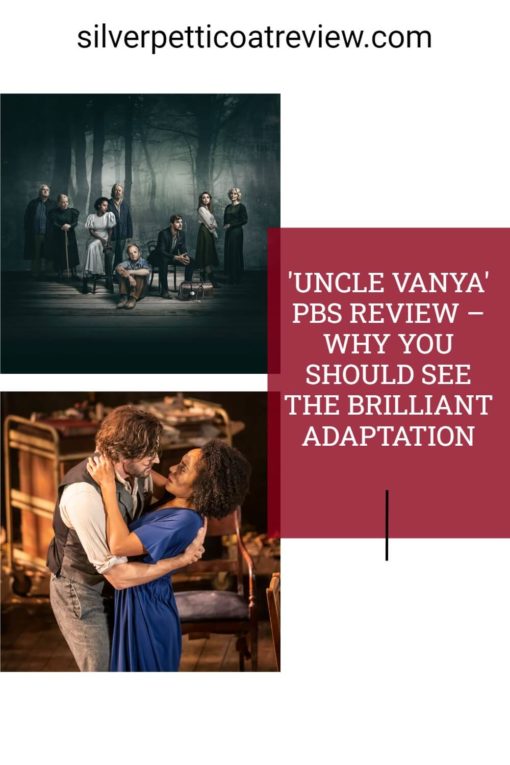 Flawless. Perfect. Exquisite. It’s hard to define why Conor McPherson’s recent adaptation of Uncle Vanya is so utterly brilliant. And yet, I was spellbound by his re-imagining of Chekhov’s famous play.

And while it’s not as good as seeing it in person, watching Uncle Vanya on PBS’ Great Performances is the next best thing. Be prepared to enter a world of beautiful melancholy, dark, ironic humor, and repressed passions.

THE STORY OF UNCLE VANYA

It’s the turn of the 20th century in Russia when the play begins. A professor retires and moves back to his rural estate – bringing his young and elegant wife, Yelena, back with him.

Soon, Vanya (the brother-in-law of the professor from a previous marriage) and Astrov, a local country doctor, both find themselves falling in love with her – while lamenting their dull and wasted lives in the country.

Meanwhile, Sonya, the professor’s grownup daughter, is in love with Astrov, but he doesn’t see her that way, leaving her to suffer her unrequited love in miserable silence.

Everything turns ugly when the professor announces he plans to sell the estate even though it’s Vanya who’s been running it all these years (for low pay), and Sonya is the legal owner.

The story draws you in from start to finish with themes of boredom, melancholy, hidden passions, and the wasted life. While it’s a depressing play on the surface, there are moments of levity and humor.

The adaptation also has a quick pace. Just expect the final scene with Sonya’s speech to Uncle Vanya about life to leave you in tears.

One of the reasons this production is so memorable is the sensational cast. Could there be a better cast than in this version? Each actor is not only gifted, playing their parts brilliantly, but they also look like each character should.

Toby Jones plays Uncle Vanya, the hero, a depressed and demoralized man in his forties who feels he has wasted his life. He brings depth, humanity, and likability to a misanthropic character who could just as easily come across as too vulgar and pessimistic to appreciate. But he presents Uncle Vanya as a whole person.

Then, there is Richard Armitage. I have always loved his performances in film and television – and even had the opportunity to see him in a play in New York City once. Here, he plays Astrov, a country doctor also bemoaning his existence.

He’s become numb, and yet he still longs for a better world. He’s the closest to a romantic figure in the play – attracting the attention of the married and idle Yelena and the sweet but supposedly homely Sonya.

Armitage even runs around in a scene shirtless, drenched from the rain. He broods and dialogues with passion in a way few actors could accomplish.

RELATED: ‘Moulin Rouge!’ Review: This is a Flashy and Fun New Broadway Musical

Besides Armitage and Jones, Rosalind Eleazar as Yelena and Aimee Lou Wood as Sonya are particular standouts. Eleazar is graceful and beautiful, while Wood is haunting and sweet.

I haven’t seen Wood before in anything but found her presence onstage and onscreen as the lonely Sonya intriguing.

The rest of the cast includes Roger Allam as Serebrayakov, the narcissistic professor, Anna Calder-Marshall as the endearing Nana, Dearbhla Molloy as the feminist mother of Vanya, and Peter Wight as Telegin (aka Waffles) – the man who works on the estate and has a wretched love life.

It is hard to imagine any future cast besting this production – they’re all that good.

WHY UNCLE VANYA IS UNFORGETTABLE

Ultimately, what makes watching Uncle Vanya on PBS such a memorable theater experience (despite not being able to see it in person) is that it offers an intimate feel with close shots and quietly spoken monologues, effortlessly blending the gap between film and theater.

So, while, at times, it feels like you’re watching a period drama, it still has the look and feel of going to the theater. Except now you don’t have to worry about seeing over the much-taller person sitting in front of you. Or is that just me?

One of the fascinating aspects of this production is how the actors take turns monologuing to the camera – deepening the intimacy between the performer and audience member.

It’s perhaps that difference between theater and film that lines people up to the theater – the energy of the performers mixed with the crowd’s energy creates a magical atmosphere that film can never emulate.

But when the actors look at the camera, it’s a clever way to offer a part of that experience.

Besides the performances and filmmaking style, the sets are also gorgeous – with furniture draped in sheets and fallen leaves on the floor. Nature is almost overtaking the decaying estate – perfectly reflecting the inner turmoil of the characters.

The costumes, on the other hand, are more timeless than period accurate. The setting is early 20th century Russia in the countryside, and while the costumes reflect the past, it’s hard to pinpoint any historical accuracy about their clothes.

But it seems purposeful – with the costumes reflecting the characters and the timeless nature of the play. Anyone should be able to watch it and relate.

Overall, Uncle Vanya on PBS’ Great Performances is a must-see theater production. Thankfully, you don’t have to travel to London to see it.

The performances, the set, the artistry, direction, and costumes are why every theater lover (and classic lit or period drama fan) should watch it. Plus, you can never go wrong with Richard Armitage making romantic speeches – even though this is a tragicomedy (leaning more to tragedy).

If you’re worried that a Chekhov play would be too boring, rest assured this is not a dull production. McPherson brings a modern approach to the story with an utterly appealing cast and humor – broadening its appeal for a much larger potential audience.

Where to Watch: PBS Passport. You can also rent or buy it on Digital and DVD (although copies are hard to come by in the U.S.).

Have you seen this adaptation of Uncle Vanya on PBS? What did you think? Were you lucky enough to see the play in person? Let me know in the comments below.