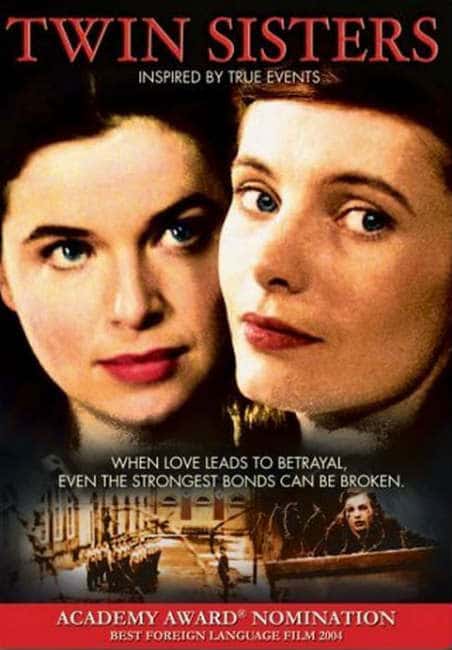 Being a twin myself, I decided to watch this film based solely on the title on the off chance it would be a good film. It’s rare to find movies about twins (or even with twins in them) that aren’t cliché and/or exaggerated. Thankfully, Twin Sisters is not one of those films. Not only is Twin Sisters a good film, it is a fantastic film that captures the relationship between twins in an honest way with a unique take on World War II as the backdrop. This film raises a serious question: If two twin sisters can’t understand each other’s point of view, then what chance does the rest of the world have?

Based on the Dutch Bestseller from Tessa de Loo, Twin Sisters tells the story of fraternal twins Anna and Lotte over the span of many decades. The beginning of the film starts like an L.M. Montgomery story – similar to that of Emily of New Moon. Twin German girls are orphaned at the age of six in the 1920s and sent to live with relatives. However, quarreling relatives fight over who get to keep them. Tragically, the family decides to separate the inseparable sisters. Anna is sent to the poorer relations (since she is the healthier one) to be raised with struggling farmers in Germany whose only interest in her is free labor. She’s abused severely by her surrogate parents and deprived of an education despite her obvious intellect. Lotte (the consumptive one), on the other hand, is sent to live with a loving middle to upper class family in Amsterdam. She’s given the best education possible with love and support.

The twins are heartbroken by the separation only made worse by the two families (the loving one well-intentioned but wrong) who feel it would be better to break all ties. The girls try to write each other only to be thwarted in their attempts. Anna doesn’t have Lotte’s address while Lotte’s new family pretend to send the letters Lotte writes in fear that their poor (and violent relations) will see their address and try and come steal Lotte away from them. They had to fight to keep even one of them (despite wanting to raise both).

Many years later, in present day and now in their old age, the twin sisters accidentally cross paths. Is this the first time they’ve seen each other since they were six? Suddenly, a mystery is introduced. Anna recognizes Lotte in the spa and tells her who she is. But Lotte is shockingly not happy to see her sister – who we know she was once incredibly close to and longed to find. Lotte runs off, with Anna heartbroken and calling after her. But what would make Lotte behave this way toward her sister?

The story then flashbacks to the girls all grown up and in vastly different circumstances a few years before World War II. The sisters have never forgotten each other and still long to be reunited. Anna finally escapes the farm after being nearly beaten to death by her surrogate father and rescued by a priest who places her in a private school to finally be educated. Lotte continues a music education while she falls in love with a handsome, young Jewish man.

Eventually, Lotte discovers the letters she had written to her sister many years earlier hidden away in the library. She confronts her adopted parents about their deception – her mother breaking down in guilt over what they had done. From there, Lotte intends to find her sister and reunite with her. Finally, on the brink of World War II, they do. At first, they send each other letters and then they reunite happily in Germany on the eve of the war. Unfortunately, the tragic events of the war once again separate them.

The film plays like a mystery and a tragedy. As the story switches back and forth between the war and present day, you don’t know what happens to permanently separate these sisters until near the end of the film. But you watch in deep fascination to understand.

Twin Sisters asks some difficult questions and doesn’t provide easy answers. And, in fact, the director doesn’t tell you how to feel. What Twin Sisters does do (and very successfully) is empathetically present both sisters’ points of view without judgment.

These two young women raised in vastly different circumstances have incredibly different perspectives. One, raised a German who (at first, but changes) sees Hitler as a way to escape her poverty and abuse so she can finally get the education she dreams of and the other raised in an affluent family who have Jewish friends and are anti-Nazi. Twin sisters as close as two people can be, but with different backgrounds. There’s definitely an element of nature vs. nurture in play here. Still, while Anna is the German with some SS connections (she marries a reluctant Austrian soldier who becomes a Nazi officer only to be closer to her by being allowed “leave” time), she is played more sympathetically in some ways because of her tragic life and upbringing. We understand her perspective. But to say more, would be to give away too much of a story that can only be watched to appreciate the depth of these two girls’ incredible lives and the tragedy of their circumstances.

The sisters are played by three sets of actresses (as little girls, as adults and in their old age) all who give memorable performances worthy of recognition. The young Anna (at six) played by Sina Richardt was especially surprising, seeming to have an incredible understanding of the heavy material for such a young actress well beyond her years.

The cinematic scope of the film was also impressive. The rich details, the costumes, the emotional musical score, the cinematography, directing and script were all remarkable. It’s no surprise that Twin Sisters was nominated for Best Foreign Film at the Academy Awards in 2004 as it truly is an incredible film.

Also worthy of mention is the romance. While the focus of the film is on the bond of twin sisters who are separated by tragic circumstances time and time again, there are still two different love stories in the film which are presented in an authentic and human way that add to the depth and ultimate tragedy of the stories.

Overall, Twin Sisters is a tear-jerker of a film I can’t recommend enough. While the story can be disturbing and rather depressing, it’s a beautiful film about twin sisters, forgiveness and the horrors of war worth checking out if you can handle truly sad films. You can watch this little known masterpiece on Netflix.

CONTENT NOTE: The film is rated R for a scene of violence and brief sexuality. However, the film is not vulgar or graphic.

Our romance-themed entertainment site is on a mission to help you find the best period dramas, romance movies, TV shows, and books. Other topics include Jane Austen, Classic Hollywood, TV Couples, Fairy Tales, Romantic Living, Romanticism, and more. We’re damsels not in distress fighting for the all-new optimistic Romantic Revolution. Join us and subscribe. For more information, see our About, Old-Fashioned Romance 101, Modern Romanticism 101, and Romantic Living 101.
Pin this article to read later! And make sure to follow us on Pinterest.
By Amber Topping on October 2nd, 2015