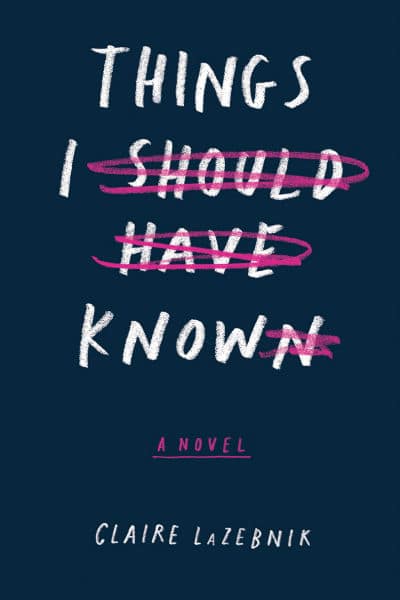 Things Chloe knew: Her sister, Ivy, was lonely. Ethan was a perfect match. Ethan’s brother, David, was an arrogant jerk.

Things Chloe should have known: Setups are complicated. Ivy can make her own decisions. David may be the only person who really gets Chloe.

Meet Chloe Mitchell, a popular Los Angeles girl who’s decided that her older sister, Ivy, who’s on the autism spectrum, could use a boyfriend. Chloe already has someone in mind: Ethan Fields, a sweet, movie-obsessed boy from Ivy’s special needs class.

Chloe would like to ignore Ethan’s brother, David, but she can’t—Ivy and Ethan aren’t comfortable going out on their own, so Chloe and David have to tag along. Soon Chloe, Ivy, David, and Ethan form a quirky and wholly lovable circle. And as the group bonds over frozen-yogurt dates and movie nights, Chloe is forced to confront her own romantic choices—and the realization that it’s okay to be a different kind of normal.

Things I Should Have Known Book Review

Released in time for Autism Awareness Month, the new YA novel, Things I Should Have Known, is a lovely and engaging book about sisters (one of whom is on the autism spectrum), romance, and coming of age. This YA Contemporary is a page-turner that also works as a window into a world of people who are different.

What I loved most about the book was the bond between the two sisters and just how realistic the portrayal is. There’s no sugar coating here. Chloe will do anything for her sister, Ivy, but it’s not always easy. LaZebnik previously co-wrote non-fiction about Autism in books like Overcoming Autism and her experience shows. The knowledge, attention to detail, and research presented on every page of Things I Should Have Known is clear from the beginning to the end. Not that one should mistake this book for non-fiction or even a documentary like style. Make no mistake, the book is also a fun fictional read with quite a bit of romance. LaZebnik has an appealing writing style which will only help her continue to grow in popularity.

I also enjoyed the four main characters, Chloe, David, Ivy, and Ethan. Especially Chloe. Now, I wouldn’t say Chloe is your typical YA protagonist. She’s not the underdog character YA books love to write about. In fact, she’s popular, beautiful, all of the guys like her, she enjoys gossiping, and even has the most popular and good-looking boyfriend in school. But she’s also incredibly human which makes her relatable. Chloe loves her sister and will do anything for her, even if that means overstepping from time to time.

As far as the romance goes, I think most readers should find the growing feelings between David and Chloe to be enjoyable to read making them easy to root for. Could their romantic development have been a little bit stronger? Yes. But they have a clever and witty repartee going between them and you understand why they begin to fall for each other.

Overall, Things I Should Have Known is a quick, enjoyable read with a positive message about Autism. And as for the things Chloe should have known, well you’ll have to read to find out!

This story has a very clear beginning, middle, and an end which would make it work best as a TV Movie or a Feature Film. Either way would work and could be presented in different ways depending on the budget. The film would be relatable and appealing to teens (and even adults) and could attract some great young talent in the leading roles.

You can buy Things I Should Have Known on Amazon.

Our romance-themed entertainment site is on a mission to help you find the best period dramas, romance movies, TV shows, and books. Other topics include Jane Austen, Classic Hollywood, TV Couples, Fairy Tales, Romantic Living, Romanticism, and more. We’re damsels not in distress fighting for the all-new optimistic Romantic Revolution. Join us and subscribe. For more information, see our About, Old-Fashioned Romance 101, Modern Romanticism 101, and Romantic Living 101.
Pin this article to read later! And make sure to follow us on Pinterest.
By Amber Topping on April 10th, 2017