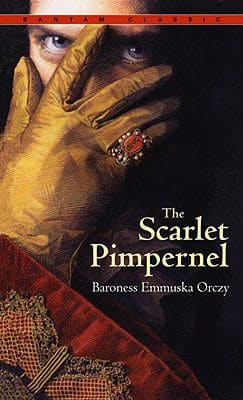 We seek him here….

“The Scarlet Pimpernel, Mademoiselle….is the name of a humble English wayside flower; but it is also the name chosen to hide the identity of the best and bravest man in all the world, so that he may better succeed in accomplishing the noble task he has set himself to do.”

If you’ve already read my gushy review of the TV movie version of the adventure novel The Scarlet Pimpernel, you may have realized that I am a teeny bit in love with this book (Translation: “teeny” = “a lot”). Can you blame me though? Emmuska Magdalena Rosalia Maria Joseph Barbara Baroness Orczy’s* tale of romance and adventure is perfectly crafted to capture the interest of anyone who loves this kind of excitement and passion and adventure in a tale. I distinctly recall the first time when I read this book and having to pause to absorb the thrill of reading some of the more emotional and thrilling scenes. Years later, I am more aware that Baroness Orczy tended to lean more toward melodrama in her work, but it doesn’t go so far over the top, it becomes nauseating. Mostly her style lends very well to her tale. 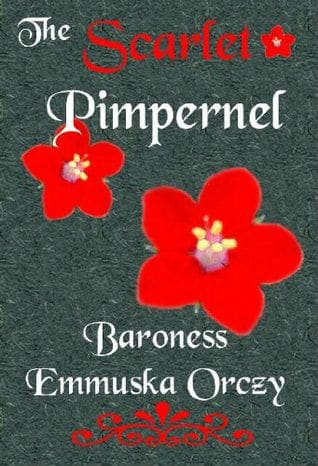 So what’s it about? After years of oppression, the poor people of France have risen up against the aristocracy. For, “Their ancestors had oppressed the people, had crushed them under the scarlet heels of their dainty buckled shoes.” The revolution has taken on an unspeakably bloodthirsty and relentless attitude though. The royal family is imprisoned and tormented, and aristocrats, men, women and children, are executed daily. Anyone, poor or rich, who is suspected of royalist sympathies, is killed as well. All this is sanctioned by the new government, and it is a time of madness and suspicion.

As the book opens, the leaders of the revolution are pleased with the way their war on aristocrats is going, but there are some concerns as some of their victims are escaping punishment. They are hearing of the exploits of an unseen enemy, of a group led by an inhumanly clever and daring man who seems to be able to spirit away the food of the guillotine from under their very noses. No one can tell them who The Scarlet Pimpernel is, but they know that he is their worst foe.

In England everyone is looking with alarm at the events in France and cheering on the exploits of the Scarlet Pimpernel. In the midst of all this, Marguerite Blakeney, a former French actress, finds herself drawn unwillingly into revolutionary intrigue. Marguerite is rich, beautiful, popular, talented and dubbed the “cleverest woman in Europe” by high fashion society, yet she’s quite miserable as she is married to Percy Blakeney, a man she married in haste and then discovers to be a complete dufus, dim witted, foppish, clueless and ridiculously obsessed with clothes. Marguerite was intrigued by her husband when they married and was drawn to him because he loved her desperately. Once they are bound though, his love seems to have vanished. Blakeney is perfectly polite and generous, but he is now distant and seemingly unconcerned with her feelings. Marguerite relieves her unhappiness about her life by cleverly insulting her husband with her stinging wit. He appears unconcerned, and she is lonely and miserable. 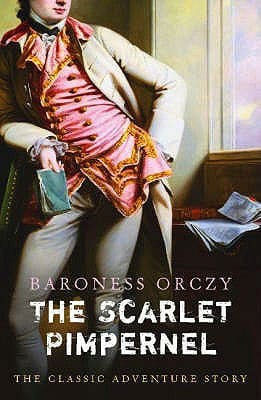 Those Frenchies seek him everywhere….

At this point in her life, Marguerite clings even more to her only relative, her brother Armand, who she believes is the only one who loves her. Armand visits her in England and then sets off back to France. Marguerite is concerned about him returning to the ferocious land of their countrymen, but he must go. After all, he is not an aristocrat; he is not in any real danger.

Just as he leaves, Marguerite falls in with a former acquaintance from France. Chauvelin, an agent of the French government, has come to England with a secret purpose to track down the Scarlet Pimpernel, discover his identity and destroy him if he can. He believes that his enemy must be a man who moves in higher circles, and he is sure that Marguerite can help him discover who he is as she knows everyone.

Chauvelin, crafty, relentless and cold, has no problem dangling the life of Marguerite’s beloved brother before her as a deadly incentive to get her to forfeit the life of the Scarlet Pimpernel, and Marguerite needs all of her wits and courage to battle the exorable plans of her new and deadly adversary.

Baroness Orczy manages to craft a truly suspenseful plot in this tale. The characters are drawn into many tight situations which can almost leave you breathless as narrow escapes abound. As Marguerite struggles to save the people she loves, she is again and again faced with painful and horrifying decisions. At the same time, the Scarlet Pimpernel and his men daringly face frightening odds, and we are caught right up in the story, anxiously wondering how all the heroes and heroines can get away one more time. 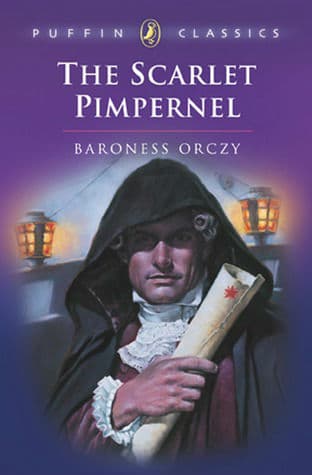 We are deeply in sympathy with these characters as well. Marguerite is very well drawn and is quite resourceful and daring for a female character in this type of tale. Her character has a lot of complexity, and we live through her anxiety and moral struggles with her, understanding her complex feelings about her husband and her loneliness as she finds herself struggling to oppose the will of Chauvelin.

Sir Percy Blakeney is hilarious in his ridiculousness and in his impeccable and much prized wardrobe. As she describes this “six foot odd of gorgeousness,” Orczy paints a perfect picture of Sir Percy with his slow drawly voice and languid mannerisms, yet we realize with Marguerite that there is something more to him, a reason why she was fascinated with him from early on, a motivation for why he seems to no longer love her, but yet at other times regards her with desire “as strong, as intense, as overwhelming, as when first her lips met his in one long, maddening kiss.” (A moment while I fan myself.) 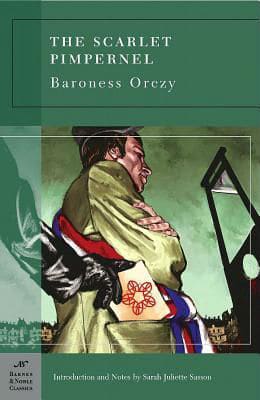 There’s no denying that Orczy can write romance as well as she writes suspense, and there’s a particular chapter at dawn in Percy’s grounds at his magnificent home which will stay with you. Love is a principal theme here, motivating many of the character’s actions and sometimes propelling them to their impending destruction.

There’s nothing more to say m’dears than to get to reading this right away. If you still hesitate, I must add that this is the first book in a series. The other books feature many of the most beloved characters and more gripping exploits, so the fun doesn’t have to end right away. Curl up with this very satisfying adventure as soon as possible.

*YES THAT’S HER REAL NAME, let’s just call her Baroness Orczy to save time shall we?

Our romance-themed entertainment site is on a mission to help you find the best period dramas, romance movies, TV shows, and books. Other topics include Jane Austen, Classic Hollywood, TV Couples, Fairy Tales, Romantic Living, Romanticism, and more. We’re damsels not in distress fighting for the all-new optimistic Romantic Revolution. Join us and subscribe. For more information, see our About, Old-Fashioned Romance 101, Modern Romanticism 101, and Romantic Living 101.
Pin this article to read later! And make sure to follow us on Pinterest.
By Dixie-Ann Belle on December 30th, 2015

2 thoughts on “Book Review: Seek Out The Scarlet Pimpernel for Unforgettable Romance and Adventure”