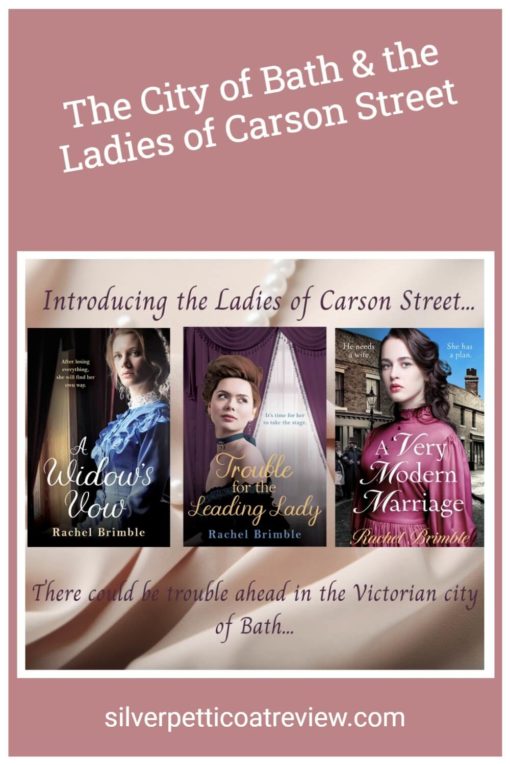 My February book release, A Very Modern Marriage, is my 28th novel and the third and final instalment in my latest Victorian trilogy, the Ladies of Carson Street.

All of my historical romances are set in the beautiful city of Bath, England, which is just a short 30-minute drive from where I live. The city is mainly associated with the Georgian era because that was when there was a huge surge in new buildings, ground-breaking architecture and landscaping of its gardens and parks.

However, Bath has featured as a major city throughout history from as far back as the Roman times to as recently as the Edwardian era.

Bath was always considered a place of opulence and the bar of social excellence… but was it really? Or did Bath have as much of a seedier side as London and every other major city in England during the 19th century and beyond?

WRITING THE LADIES OF CARSON STREET

This is the question I wanted to explore when I began writing the Ladies of Carson Street and soon decided to throw caution to the wind and have my heroines working and living as prostitutes… not your normal run-of-the-mill romance heroines!

I was concerned about how this would be received and that the books might not be enjoyed as I’d hoped. I have hundreds of loyal readers – would the idea of a heroine working as a prostitute be a step too far? Thankfully, this was not the case!

The reviews and feedback I have received for the first two books in the trilogy (A Widow’s Vow & Trouble For The Leading Lady) and hopefully the third, A Very Modern Marriage, which releases February 3rd, have proven my instinct right.

Fiction, and romance in particular, is firstly (for me, at least) about the emotional journey of the characters and then the plot. And I can promise lots and lots of emotion throughout the trilogy.

The heroines, Louisa, Nancy and Octavia, all come from very different backgrounds, but life has been unfair and unkind to each of them, leading them into the side of Victorian Britain that some like to pretend did not exist.

However, these women are no shrinking violets and have survived the knocks and hardships with dignity and strength. For me, Louisa, Nancy and Octavia are an inspiration.

They are the epitome of female empowerment, possibility, hope and tenacity – an inspiration of what is possible and, as a romance author, all I wanted to do was bring my readers on a journey to Louisa’s, Nancy’s and Octavia’s deserved happy ever after.

There are so many famous landmarks in Bath, Pulteney Bridge, Royal Crescent, The Circus, the Pump Room, the Abbey – to name a few – so it is an absolute pleasure and privilege to include these places in my books whenever possible.

I love Bath and try to encourage people to visit there all the time – I was absolutely thrilled when my author friend, Teri Wilson, was able a few years ago and I got to show her around 😊

WHY YOU SHOULD READ THE LADIES OF CARSON STREET

Yes, the Ladies of Carson Street trilogy is grittier and maybe a little darker than your average historical romance series, but it is also full of heart and happiness, challenge over adversity and the belief that life goes on, no matter what.

If you love British period dramas with all the suspense, intrigue and romance they provide, why not give my latest series a try?? I’d love to know what you think…

The Ladies of Carson Street Trilogy:

Content Warning: The Ladies of Carson Street saga is a three on the steam scale out of five. So, a couple of explicit scenes are in each book.

OFFICIAL SYNOPSIS OF A WIDOW’S VOW

1851. After her merchant husband saved her from a life of prostitution, Louisa Hill was briefly happy as a housewife in Bristol. But then a constable arrives at her door. Her husband has been found hanged in a Bath hotel room, a note and a key to a property in Bath the only things she has left of him. And now the debt collectors will come calling.

To a new life as a madam.

Forced to leave everything she knows behind, Louisa finds more painful betrayals waiting for her in the house in Bath. Left with no means of income, Louisa knows she has nothing to turn to but her old way of life. But this time, she’ll do it on her own terms – by turning her home into a brothel for upper class gentlemen. And she’s determined to spare the girls she saves from the street the horrors she endured in the past.

Enlisting the help of Jacob Jackson, a quiet but feared boxer, to watch over the house, Louisa is about to embark on a life she never envisaged. Can she find the courage to forge this new path?

A Widow’s Vow is the first in a gripping and gritty new Victorian saga series from Rachel Brimble. You won’t be able to put it down.

OFFICIAL SYNOPSIS OF TROUBLE FOR THE LEADING LADY

As a girl, Nancy Bloom would go to Bath’s Theatre Royal, sit on the hard wooden benches and stare in awe at the actresses playing men as much as the women dressed in finery. She longed to be a part of it all and when a man promised her parents he could find a role for Nancy in the theatre, they believed him.

His lie and betrayal led to her ruin.

Francis Carlyle is a theatre manager, an ambitious man always looking for the next big thing to take the country by storm. A self-made man, Francis has finally shed the skin of his painful past and is now rich, successful and in need of a new female star. Never in a million years did he think he’d find her standing on a table in one of Bath’s bawdiest pubs.

Nancy vowed never to trust a man again. Francis will do anything to make her his star. As they engage in a battle of wits and wills, can either survive with their hearts intact?

The second in Rachel Brimble’s thrilling new Victorian saga series, Trouble for the Leading Lady will whisk you away to the riotous, thriving underbelly of Victorian Bath.

He needs a wife…

Manchester industrialist William Rose was a poor lad from the slums who pulled himself up by his bootstraps, but in order to achieve his greatest ambitions he must become the epitome of Victorian respectability: a family man.

She has a plan…

But the only woman who’s caught his eye is sophisticated beauty Octavia Marshall, one of the notorious ladies of Carson Street. Though she was once born to great wealth and privilege, she’s hardly respectable, but she’s determined to invest her hard-earned fortune in Mr Rose’s mills and forge a new life as an entirely proper businesswoman.

They strike a deal that promises them both what they desire the most, but William’s a fool if he thinks Octavia will be a conventional married woman, and she’s very much mistaken if she thinks the lives they once led won’t follow them wherever they go.

In the third instalment of Rachel Brimble’s exciting Victorian saga series, The Ladies of Carson Street will open the doors on a thoroughly modern marriage – and William is about to get a lot more than he bargained for…

Rachel lives in a small town near Bath, England. She is the author of over 25 published novels including the Ladies of Carson Street trilogy, the Shop Girl series (Aria Fiction) and the Templeton Cove Stories (Harlequin).

Rachel is a member of the Romantic Novelists Association as well as the Historical Novel Society and has thousands of social media followers all over the world.

By The Silver Petticoat Review on February 1st, 2022