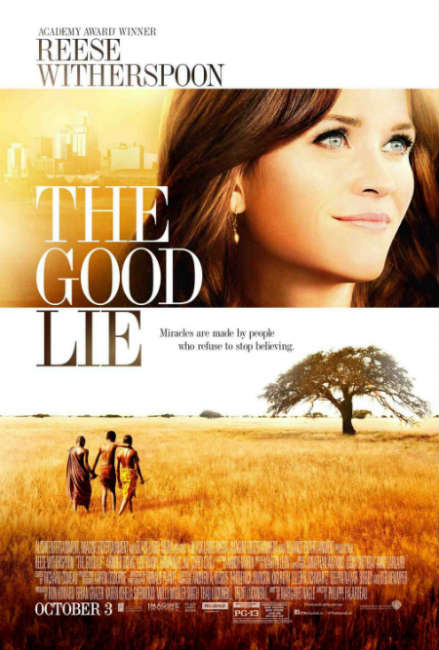 The Good Lie was released last year in theaters but was mostly overlooked despite having big time producers (including Ron Howard) on the project, a marketable actress and ultimately favorable reviews. However, the film was not heavily promoted, nor did it ever receive a wide release. Plus, it was never intended to be Oscar bait – just a good film with a wonderful story. Still, it’s not too late to catch this heartbreaking but feel-good docudrama starring (or rather co-starring) Reese Witherspoon and the up and coming talented actors playing the Sudanese refugees.

The Good Lie tells the story of a few Sudanese children who become orphans during the Sudanese Civil War. Together, they go on a dangerous journey (with many horrifying trials along the way) to reach a refugee camp all the way in Ethiopia. From there, they grow up in the camp in poor living conditions until many years later four of them (not all) are chosen to be sent to America.

The boys move to Kansas City, not knowing anything about American culture. Their employment counselor Carrie (Reese Witherspoon), however, tries to help them adjust, but it’s not easy for them. They have emotional scars and come from a foreign culture, making American decadence alien to them. For the course of the film, the boys learn to live in America, work regular jobs while also learning to come to terms with their past.

What makes the film all the more compelling and ultimately authentic is the performances from the leads are played by real refugees – two of the actors, in fact, were actual child soldiers.

What makes the film all the more compelling and ultimately authentic is the performances from the leads are played by real refugees – two of the actors, in fact, were actual child soldiers. Emmanuel Jal (now a popular musician), for instance, who plays one of the Sudanese boys, Paul, has an incredible true story with a documentary about him you can watch for free on Amazon Prime.  Also, rest assured, The Good Lie is about the Sudanese refugees and not Witherspoon – who only plays a supporting role in the film. This is their story and one worth watching.

Overall, if you want to watch a strong film with a wonderful script from Margaret Nagle, good directing from Philippe Falardeau, memorable characters and story, The Good Lie might be a great choice.

You can buy a digital copy on Amazon

or just buy it on DVD:

Our romance-themed entertainment site is on a mission to help you find the best period dramas, romance movies, TV shows, and books. Other topics include Jane Austen, Classic Hollywood, TV Couples, Fairy Tales, Romantic Living, Romanticism, and more. We’re damsels not in distress fighting for the all-new optimistic Romantic Revolution. Join us and subscribe. For more information, see our About, Old-Fashioned Romance 101, Modern Romanticism 101, and Romantic Living 101.
Pin this article to read later! And make sure to follow us on Pinterest.
By Amber Topping on October 25th, 2015