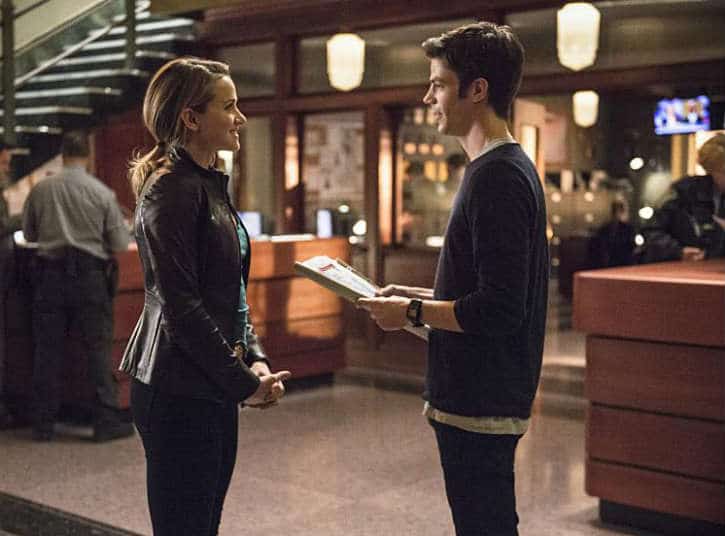 The Fury of Firestorm Recap

Tuesday’s episode of The Flash, The Fury of Firestorm, was really very good. Its’ overwhelming theme was about second chances and I cannot help but root for one-second chance scenario, in particular, to take root and blossom. Aside from that, for the past two weeks, The Flash has worked hard to pique our interest for CW’s upcoming Legends of Tomorrow comic book adaptation. Last night was no different. The continuing trek to introduce each of the primary characters of that show took the story to a new level with the second merging of Professor Stein.

Revisiting the night the particle accelerator exploded, we visit a high school football game where a quarterback is celebrating a win. As he stands on the field reveling in the possibilities (including scholarships and pro ball), he spots the terrifying image that is the explosion. The teen gets his teammates to safety, but not before suffering catastrophic injuries to himself.

The Decline of Professor Stein 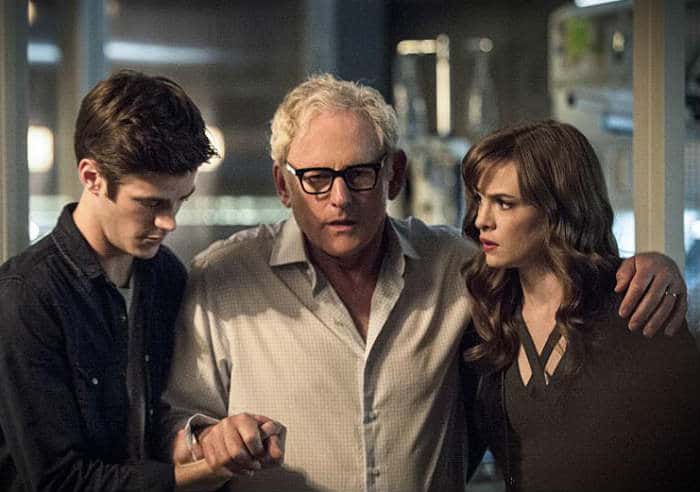 Back in the present day (as you’ll remember from last week), Professor Stein’s health is spiraling fast in the aftermath of Ronnie’s death. He needs the cells of his other Firestorm half to merge. Cisco stabilizes him (for now) and discovers an apparatus to act as a walking stick and power source. But the fix is temporary. Stein needs another match found in order to exist.

Caitlin is already a step ahead of everyone. She has researched potential candidates (both of whom were affected by the accelerator) and following their latest scare, she reveals who they are. The more promising match, Hewitt, is a scientist himself and Caitlin feels his resume has more to recommend him. Then there is Jefferson Jackson – or Jax, a high school student whose college aspirations were cut short that night. Caitlin leaves to make their case to Hewitt and Barry along with Stein track down Jax. This leaves Cisco alone at the lab where Earth-2 Wells is lurking about (still unknown to the team). At the garage where he works, Barry and Stein are unsuccessful at piquing Jax’s interest. Upon their return to the labs, Caitlin has already recruited Hewitt. An unsuccessful merge takes place leading to an angry Hewitt storming out. At this point, it looks like the gang has some work yet to accomplish. 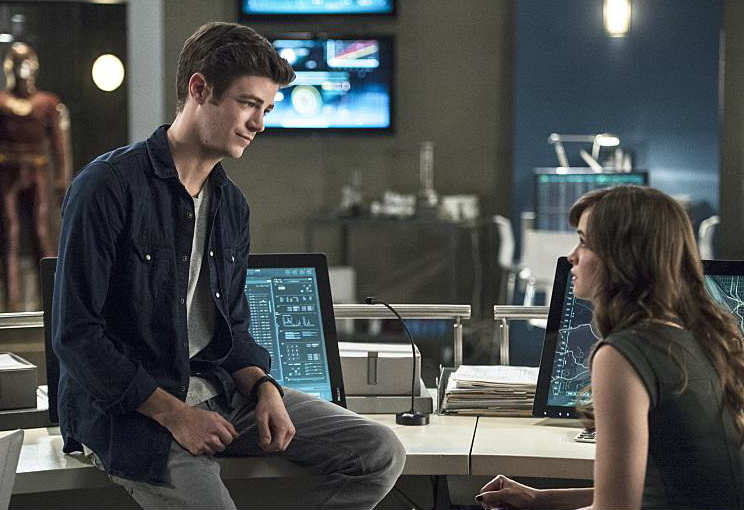 Eventually, Jax does seek them out, assuming their offer has something to do with a procedure that will fix his knee. Instead, they tell him what S.T.A.R. Labs is really offering (to be a superhero), and he gives a definite “no.” This leads Caitlin to wonder who says no to being a superhero?! As Barry so wisely realizes, Caitlin’s real reservation has more to do with Ronnie’s death than the idea of Jax being an unsuitable candidate.

Unbeknownst to the S.T.A.R. Labs team, two things happen in correlation with their attempts to find a candidate. Hewitt develops abilities from touching Stein. And a break-in occurs at Dr. McGee’s lab (where Caitlin worked for the last six months). The connection is unclear, however, Dr. McGee enlists Detective West’s help. She insists the thief was Harrison Wells. Of course, as Joe’s new partner, Patty is also clued in. Clearly wanting to work with Barry, she makes plans to have him come to the lab to do forensic work. Only Joe orders her to leave Barry out of this case. He doesn’t want Barry to know Wells is still alive.

Speaking of the West family, Joe is still trying to make sense of Francine’s appearance. Having made a decision, Iris arranges to meet her mother with her father present. At their meeting, Iris also makes her choice: she wants her mother to leave them alone. She’s gotten along without her for 20-some years and she is planning to do the same for the next twenty.

Later, Francine corners Joe again telling him the real reason she’s back in Central City; she’s dying. She has a disease common to former addicts. This prompts Iris to consider giving her mother a second chance, but before she does, she hones her investigative skills. Digging into her mother’s background, she discovers a shocking secret, Francine has a son… 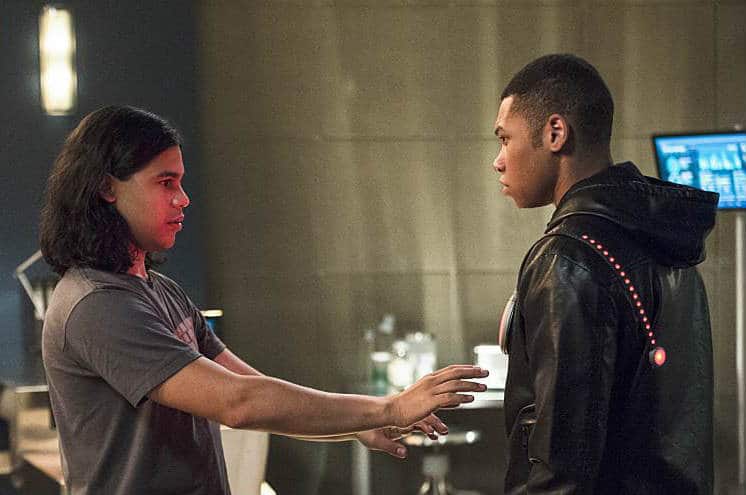 With Barry’s help, Caitlin realizes she didn’t help Jax see the potential of Firestorm. Seeking him out, she appeals to him on a personal level, telling him of her connection with Firestorm. But while she’s at Jax’s garage, Hewitt attacks her. Though Caitlin and Jax escape, Hewitt isn’t done with his plans. At the labs, Stein is again crashing. Somewhere between the attack and his arrival at the labs, Jax decides to merge; he’s ready to become Firestorm. This merge successfully takes and Stein is again well. But neither man has time to adjust as Cisco sends them out to the football field where Hewitt is preparing for battle. Between Firestorm and The Flash, they manage to defuse Hewitt.

As the episode draws to a close, the gang says goodbye to Firestorm, who plans to continue their training where Stein and Ronnie left off. Before they leave, Stein has parting words of wisdom for Cisco. He advises him to tell his friends about his own new abilities. 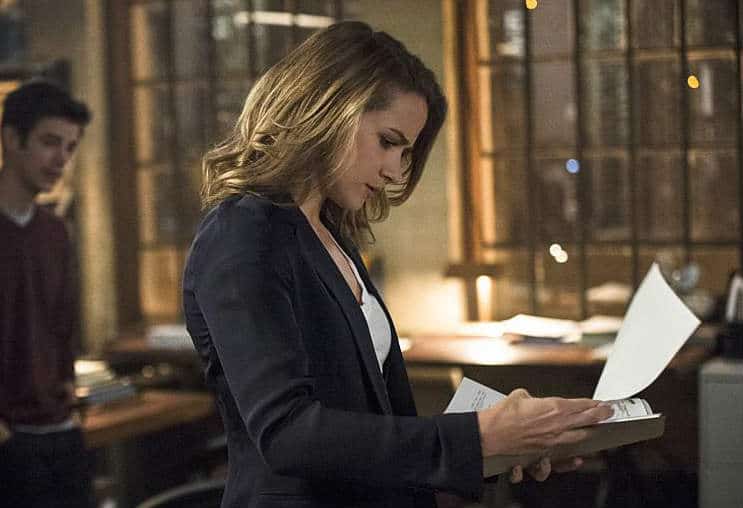 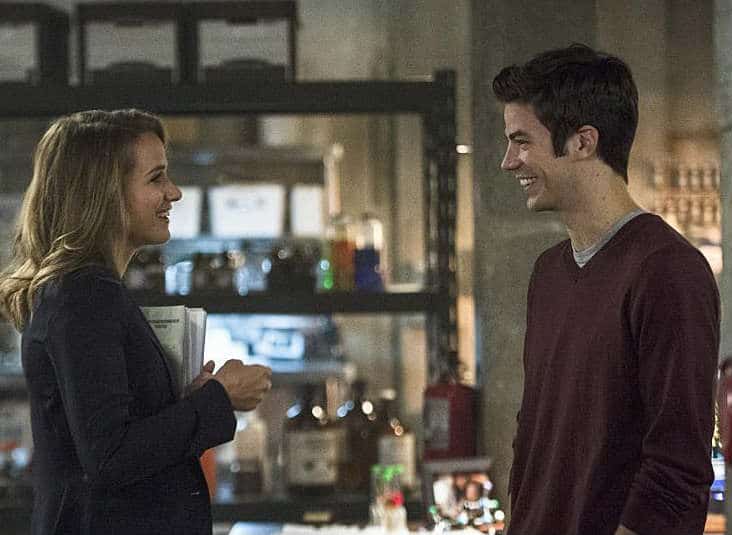 At the police station, her recent promotion to the meta-human task force is something Patty continues to take seriously. So much so she asks Barry to run some tests on a shark tooth she collects from a possible new threat. (A witness claims it was a shark walking as a man.) Naturally, Barry doesn’t realize that Parry is interested in more than working with him. It takes Joe’s gentle prompts to push Barry to ask Patty out. First he runs her DNA and Patty stumbles through trying to keep the secret of their new case from Barry. She isn’t good at keeping secrets. 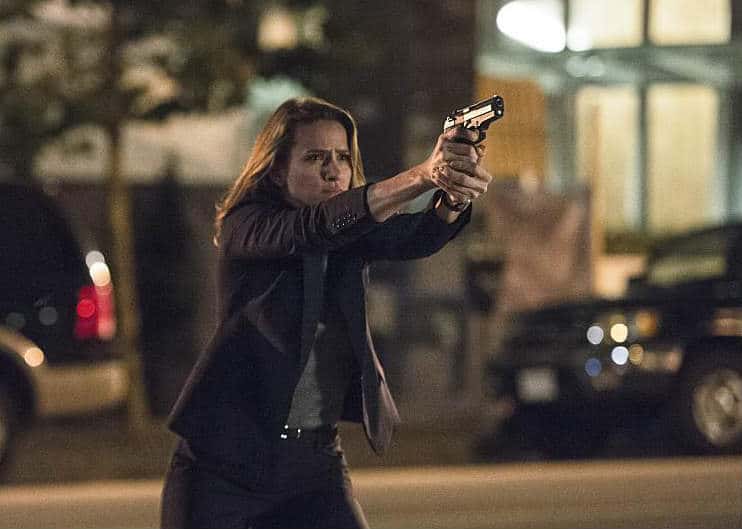 Resolved to move on and plans in place to ask Patty out before he can proceed, The Flash is attacked by the man-shark meta-human. (Who else thought this thing was creepy weird looking!?). All of this happens outside the café where Patty is. Seeing the commotion, she appears on the scene with plans of saving the day. But all she does is divert the creature’s attention. It takes a hooded man to derail the shark’s attention. Free of the creature’s grasp, The Flash chases after the mysterious figure. A figure who turns out to be other earth’s Harrison Wells…

What did you think of The Fury of Firestorm? Did you like the continuing story potential of Barry and Patty; Iris’ mother; the second earth Wells? Could it be possible this Wells is good? Comment down below with any theories or opinions.

Our romance-themed entertainment site is on a mission to help you find the best period dramas, romance movies, TV shows, and books. Other topics include Jane Austen, Classic Hollywood, TV Couples, Fairy Tales, Romantic Living, Romanticism, and more. We’re damsels not in distress fighting for the all-new optimistic Romantic Revolution. Join us and subscribe. For more information, see our About, Old-Fashioned Romance 101, Modern Romanticism 101, and Romantic Living 101.
Pin this article to read later! And make sure to follow us on Pinterest.
By Rissi JC on October 28th, 2015