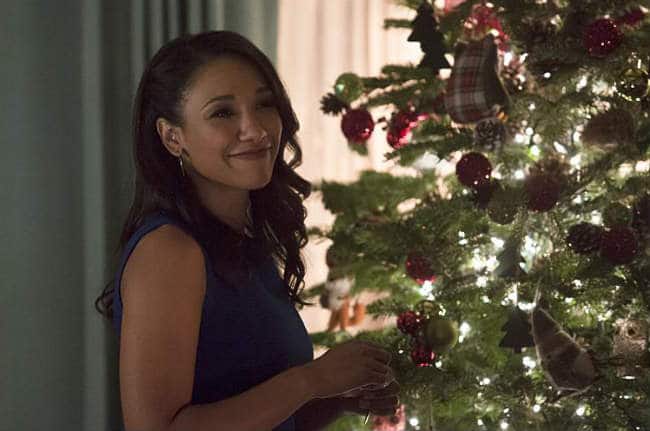 With all of the groundwork the writers are laying for CW’s upcoming spin-off (which is, of course, Legends of Tomorrow), last night’s episode, “Running to Stand Still,” was a breath of fresh air. Why? Because it took a moment to enjoy some of the lighter, important ways this show sparkles – primarily some decent character development. Of course, letting some Christmas magic slip through does nothing to hinder what has been a delightful season. So far…

“Running to Stand Still” opens with a terrified Harrison Wells being chased (inside S.T.A.R. Labs) by the formidable Zoom. Unable to make it to his modified weapon in time, Zoom places Wells in a death grip. Wells begs him to kill him, but naturally, we know there is a reason Zoom is confronting Wells. Unfortunately, before we can learn the why, the scene cuts away. This leaves us in suspense and winds up being a plot point we revisit later on. 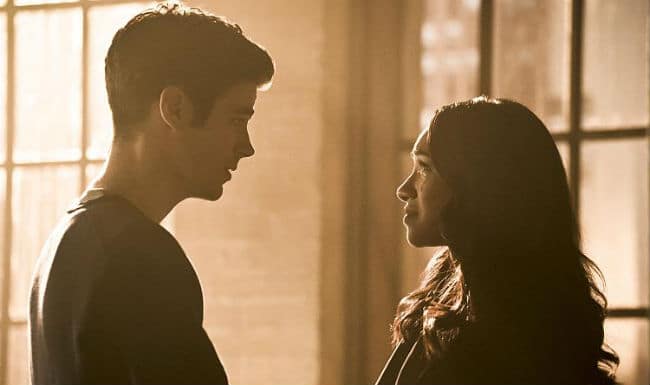 They say confession is good for the soul and poor Iris is letting her secret eat away at her. Following a day of Christmas shopping frivolity, Iris’ coffee shop conversation with her father gets sentimental. Joe reminisces about a family heirloom watch which puts Iris in the mind of her brother, Wally. (You’ll remember his off-screen introduction happened back when Francine West reappeared in Iris’ life several episodes back.) This sends Iris straight to her best friend, Barry (who we find in his lab making out with Patty). Following Patty’s exit, with tears in her eyes, Iris confesses everything. Together, the siblings-by-circumstance decide the only thing to do is tell Joe.

Joe’s reaction to Iris’ news is expected. He’s hit with a brick, emotionally, and though he doesn’t storm off, he does leave a tearful Iris. He needs to “sit” on the news he says. As he’s done so many times for Barry, it’s Barry who helps Joe. Feeling guilty over never having had a feeling that he had another kid, Barry reminds him of all that he did by raising him and Iris. The moment is, as always, well written and played. These two have a great relationship and each time they have a heart-to-heart like this, I’m reminded why. 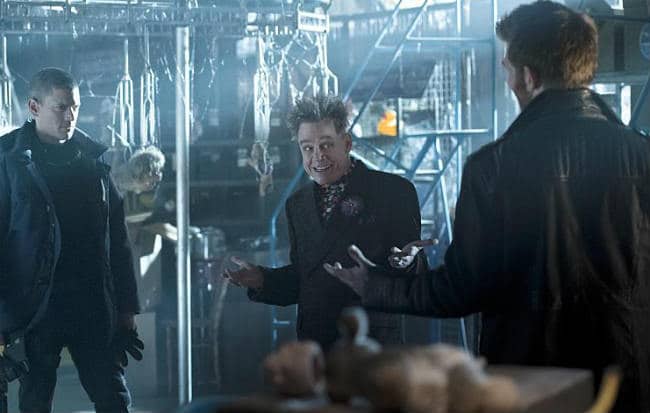 The big baddie of the week wasn’t so much one villain as it was three. All of whom are familiar faces to Central City. Mark Mardon (Weather Wizard), Leonard Snart (Captain Cold) and James Jesse (The Trickster) are back. Mardon breaks the inmates out in the hopes of retaining their help in putting Barry in the ground. Needless to say, this creates a bit of a problem. 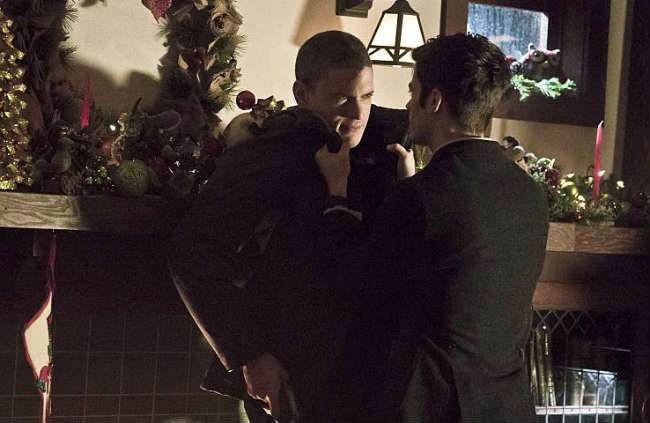 For starters, Snart isn’t so eager to kill Barry after what he did to help his sister, but he cannot let his comrades know this. Instead, he warns Barry after enjoying a cup of cocoa by the fire… at Barry’s house. 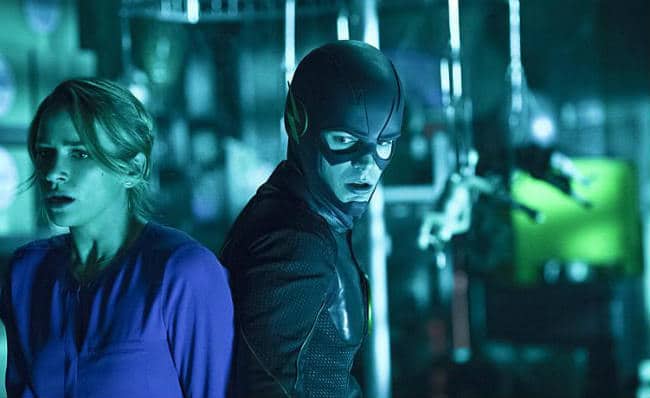 Mardon’s return affects Detective Spivot the most. Her motivation for joining the anti-metahuman task force was to eventually be rid of Mardon. While Cisco and Barry work on inventing something that might stop Mardon (a time jump invention Barry learned of last time he came up against Mardon), Patty plans to pursue him on her own. Her singlemindedness drives her to solely search out Mardon which makes her reckless. Because she follows the one lead the CCPD gets after a live broadcast by the Trickster, Patty places herself in danger. The Flash has to save her and it’s to him she unleashes some of her pain. She blames herself for her father’s death since it was supposed to be her at the bank the day of the robbery. During this time, she shuts Barry out unaware that it’s to him she’s sharing her private thoughts.

Thanks to Cisco’s skills (he locates Mardon thanks to an electric charge and elimination of the surrounding electricity trick), Barry confronts the villains minus Snart. With plans to take down Mardon and Jesse, Barry isn’t prepared for the contingency plan they have in place. Mardon offers Barry the lives of one hundred children for his own. You see, there have been bombs handed out to children leaving Barry with no choice but to surrender. Wells’ quick thinking and a magnetic trick send the bombs through a breach allowing Barry to defuse the situation and fight back. Just when he has the villains contained, Patty arrives on the scene. She disables Barry and holds a gun to Mardon’s head. The Flash talks her down, and instead of taking justice into her own hands, she arrests Mardon. 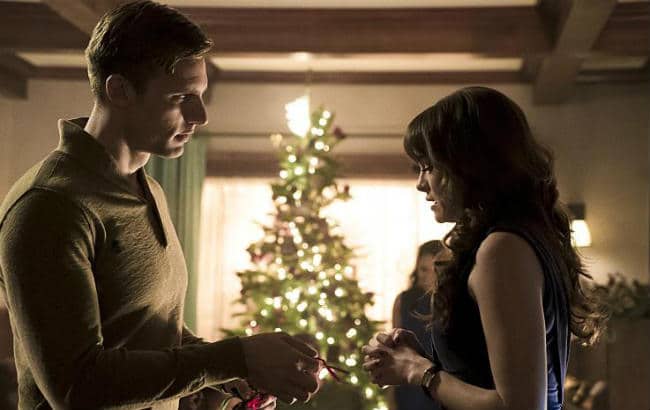 Before the Christmas celebrations begin, Joe comes to grips with the secret of his son. He spoke with Francine, he tells Barry, and someday, he’ll have a chance to meet Wally – once he knows the truth. Right now, he has something to give Barry. He gifts him the watch he has held onto. He tells him that he always planned to give it to his son and now, he has. 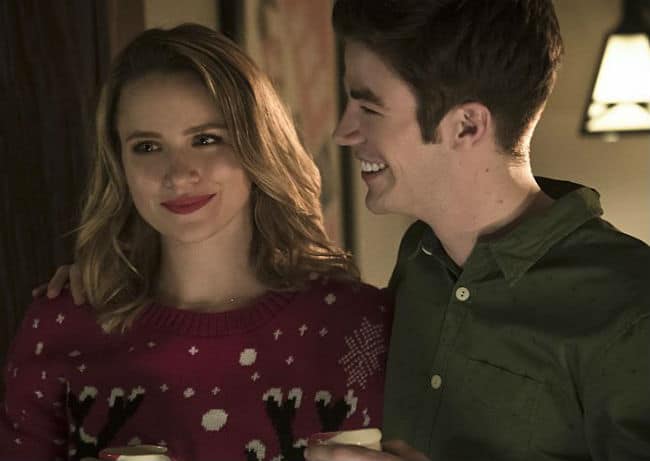 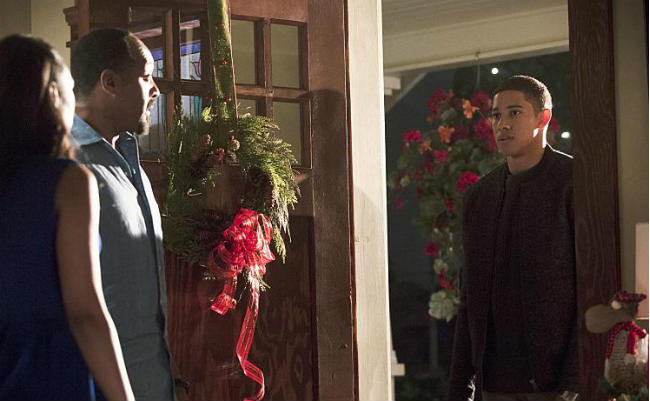 Everything comes to a close at the West house where frivolity and mistletoe are present. There is some tree trimming and Jay helps Caitlin with the mistletoe, under which the two share a kiss. In an ugly albeit cute Christmas sweater, Patty arrives to join the festivities. She tells Barry she’d like to explain to him what she’s been going through and why she’s been distant. Finally, the doorbell rings just as their party is complete, on the other side stands Wally West.

When coming upon Caitlin and Jay in the lab, Cisco urges what we’ve all been thinking (and finally get to see in this episode!). With sarcasm and an eye roll, he gives them a suggestion they take to heart with his next words:

– Speaking of Jay, he’s back in this episode, though his role is limited to working with Caitlin on potential ways to stop Zoom. Still, they enjoy some nice banter and flirting, which of course, I don’t mind in the least.
– Watching Patty go through her ordeal, Barry decides it’s time to forgive Wells. He doesn’t want him to control his life or happiness anymore. With the protection of a glass window between them, Barry tells just this to Earth-2 Wells as a kind of therapeutic way of releasing Wells’ hold on him…
– Going back to the beginning of this recap, the close of the winter finale finds Wells meeting with Zoom at a remote location. There Zoom demands an answer from him. The proposition goes something like this: Wells has to help Zoom make Barry into the best speedster he can be. Zoom wants a real fight on his hands when it comes time to defeating Barry. As an incentive, Zoom gives Wells a fleeting moment with his daughter in his arms. After snatching her back, Wells gives his answer: he’ll help Zoom. It would seem just when Barry is ready to move on from Wells’ betrayal, he is about to be betrayed by another Wells all over again.

That’s it for 2015’s The Flash recaps! What’d you think of the winter finale, Running to Stand Still? Were you glad it went out with some joy? How about the return in January? Looks to me like Patty might be in danger, in addition to the writer’s edging closer to letting her in on the secret. Share any of your thoughts down below. I’d enjoy reading them.

Our romance-themed entertainment site is on a mission to help you find the best period dramas, romance movies, TV shows, and books. Other topics include Jane Austen, Classic Hollywood, TV Couples, Fairy Tales, Romantic Living, Romanticism, and more. We’re damsels not in distress fighting for the all-new optimistic Romantic Revolution. Join us and subscribe. For more information, see our About, Old-Fashioned Romance 101, Modern Romanticism 101, and Romantic Living 101.
Pin this article to read later! And make sure to follow us on Pinterest.
By Rissi JC on December 9th, 2015