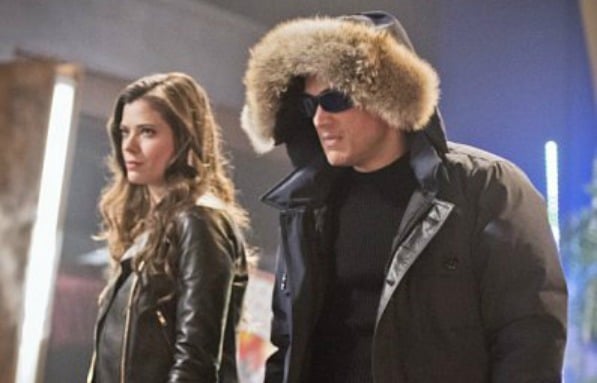 Last week the DC Comics show The Flash returned after a three-week break, which meant the return of some fun recap conversations. Hyped to be epic and surprising, it fulfilled that and more making me question what the last push of the first season would be like. Could its sixteenth episode possibly keep up that momentum?

You’ll remember we left Barry with the discovery he can time travel, an exciting prospect that has interesting repercussions. In fact, he discovers he is reliving his day – his race to the call at the morgue to be exact, not helping prevent a tsunami. Things are disorientated because of this. What does this mean, he wonders? He’s back to the beginning of a day he’s already lived. As proof, Barry is able to tell the police everything they should be looking for before it happens. 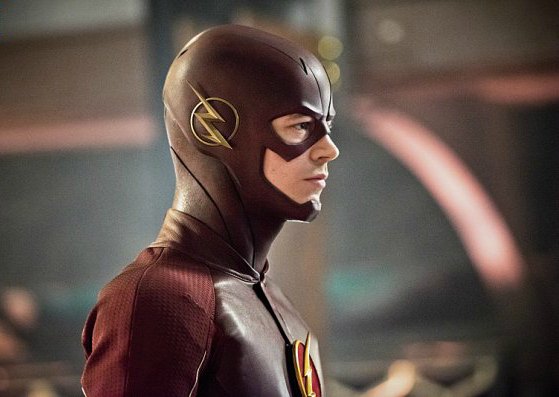 According to Wells, Barry has ruptured the time continual. Much to Wells agitation, he warns Barry to keep his future day to himself.  But struggling with the concept, Barry tries to tell Wells what he saw anyway. Instead, Wells advises Barry to live the same day over again without missing a step. Shortly thereafter, Wells checks with Gideon about what the future looks like, which according to his creepy supercomputer, seems to be intact. Could Wells not wanting to hear Barry’s vision of the future somehow mess with his future? Because at this point, I have to say, I am more and more anxious to see Barry begin to doubt his so-called counselor.

Ever trusting of Wells and in fairness to Barry, he does attempt to go about his day same as he lived it. Step one being to go see Joe at the police station where visions of the future and Captain Singh being seriously injured flash in his mind. His driving need to do good and insure the safety of Joe, inspires him to capture Mardon and imprison him in the pipeline. From there, he gets a tongue lashing from Wells for changing the timeline.

The Return of Captain Cold and Heat Wave + One

Returning to Central City is the dastardly duo of Captain Cold and Heat Wave. Once there, they are confronted by a man named Santini who holds possession of their weapons, plus a good part of the crime syndicate. They still manage to wipe out their captors, putting into motion their own evil plans to take over the Santini empire. It would seem Captain Cold plans to ascend to the role of “godfather.” Not only are Captain Cold and Heat Wave returned to Central City, they also bring with them a new potential villain.

Off-setting the drama and confusion of the time travel plotline, there is a fun subplot this week involving Cisco and Caitlin. Or it starts out that way. On their way into work, Cisco worries about seeing his family again and specifically meeting up with his brother. Turns out it’s Dante’s birthday, and offering moral support, Caitlin offers to go along. (But really, it’s all about an opportunity to see baby Cisco without long hair.)

Cisco and Caitlin attend his brother’s birthday where Dante is being honored as the “better son,” according to Cisco’s family. After an awkward greeting with his brother, Dante takes the opportunity to show off at his party by impressing with his musical expertise. But before the party is over, he also tries to impress Caitlin and takes a turn poking fun at Cisco still working at S.T.A.R Labs. This sends Cisco over the edge, and he and Caitlin leave. 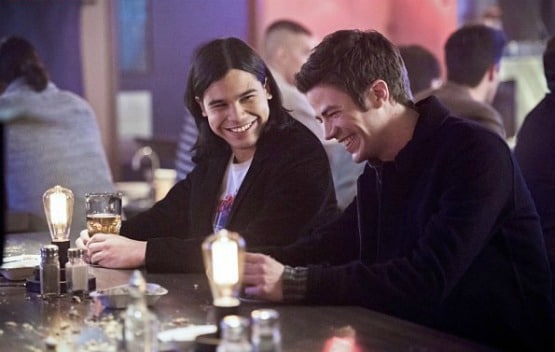 Barry takes his continual travel experience seriously and tries to obtain the same speed he achieved in the safety of the labs training room. Unsuccessful doing that, he leaves to have a lunch date with Linda, who has questions for him. She wants to know what is going on with Barry – he’s never late and these days he’s not the same Barry she knows. In a mistaken move (adding my two cents with that statement), the pair have a genuine heart to heart and end things. Linda believes that loving someone means a heart aches for their other half. She wants to know if Barry’s heart aches for her. He doesn’t respond, which seems to tell Linda all she needs to know. The two part ways amicably. Immediately following this, Barry asks Iris to meet with him later at the coffee shop, but before he leaves, he has a word with Iris’ co-worker, Mason. Knowing the future plans Mason has to expose Wells, he tells Mason he’s wrong about his hunch. Barry doesn’t believe Wells had anything to do with Stagg’s death, which might be what Barry believes, but we all know he is wrong. 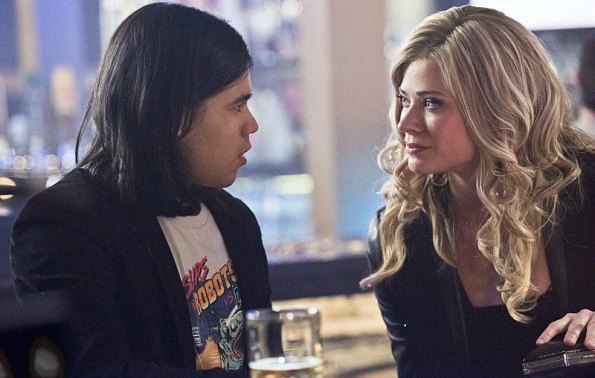 Barry and Cisco meet up for a drink where Barry describes his “great” day after breaking up with Linda. Cisco is then hit on by “Lisa,” a cute blonde who claims to be an engineer. After some drinks and a kiss, the pair leaves the bar and she takes Cisco home with her. Once there, Lisa reveals exactly who she is, ending the too-good-to-be-true scenario: she is Leonard Snart’s sister.

The next day, Barry tries to confess his love (again) for Iris. This time he uses his future knowledge to try and convince Iris that she harbors feelings for him. She turns him down (saw that coming) and claims to love Eddie. After Eddie learns what happened, he punches Barry, telling him to leave Iris alone! Wow. I think that’s the first time we’ve seen Eddie “care” about Iris… or that seriously anyway.

Barry heads back to S.T.A.R Industries where he learns Caitlin and Wells are worried about Cisco – they haven’t heard from him. Joe discovers that “Cold” is back and warns Barry he could start a mob war, which is exactly what he does! 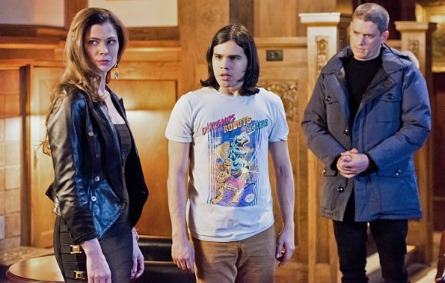 Meanwhile, Cisco is being held by Captain Cold and his duplicitous sister, Lisa. They have demands of Cisco. His expertise weapons is required and they require weapons. Cisco refuses to help them, however, as it would happen they have some leverage of their own: Dante. This changes things and instead of putting his brother’s life at risk, Cisco prepares something for Snart with a tiny flaw. Not about to be bested, Cold makes the discovery the “firing pin” is missing. The brother-sister duo waste no time taking their new toys out to play, wreaking havoc on the rest of the Santani family at their casino. While they are there, The Flash tries to obtain the upper hand by holding Lisa, but turns out Snart is holding Cisco which means Barry has to let Lisa go. 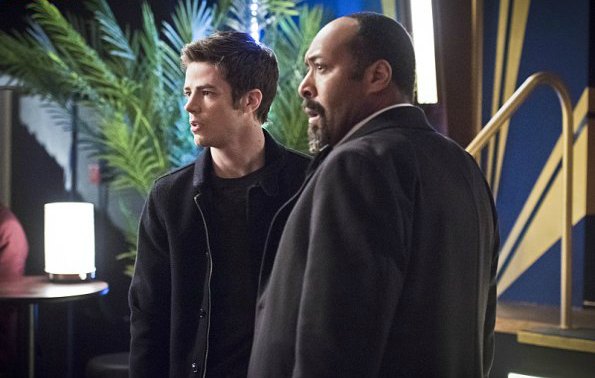 Then there is Barry carrying the burden of what happened in his future. He admits that he messed with time and it’s a dangerous thing, but he still wants Wells to hear his version of the day. The timeline might have spared Joe, but it’s changing things in another way. Wells listens to Barry, but warns him that messing with time travel is dangerous. Barry hopes to save his mother in the near future by travelling back while Wells counters, how many will die if Barry tries to divert the past to save her? 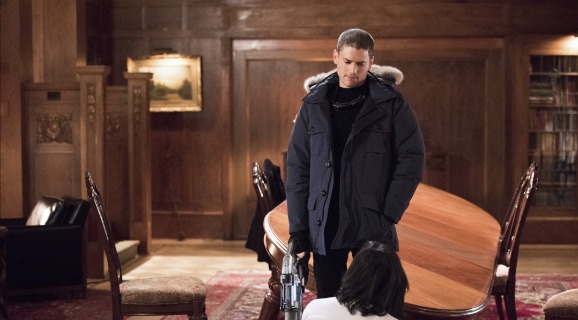 Back at Snart’s lair, the Ramon brother’s situation forces them to have a bonding moment. Truth be told, Dante has been jealous of his brother. Cisco pursued his passion, Dante did not. Dante feels some responsibility to do right by his brother and gets loose from his restraints. He and Cisco make a valiant effort to take Mick (Heat Wave) by surprise, but of course Mick along with Snart gets the upper hand. In the aftermath of this, Snart strikes a deal with Cisco: he’ll let them go after the answer to one question, who is The Flash? Cisco refuses to answer, and Dante is threatened with bodily harm. Next scene is at the labs where Cisco returns and confesses that in order to save his brother he betrayed Barry’s identity. Despite Cisco’s regret, Barry forgives him. But Cisco has guilt and doesn’t believe he deserves to be a part of the team, and so he walks away.

Cisco works on packing up to leave, but Wells asks if he can show him something before he leaves. He makes a good speech, trying to inspire Cisco to stay. According to Wells, all he proved today is that he’s human, and that in many ways, Cisco has shown him what it’s been like to have a son. Interrupting their moment is Caitlin’s and Barry’s discovery. Snart’s real purpose in hitting the casino was to have the money moved.

Barry of course tries to stop the robbery in progress and successfully isolates Snart. “We have to talk,” Barry says. He tells Snart he knows all that Cisco told him. The two have a face-off trying to come to a kind of gentleman’s agreement, if you will. Snart says he won’t stop taking what he wants, he likes playing this game and he’s “good at it.” Barry tells him to leave Central City, and he and his gang of “rogues” best leave Barry’s friends and family alone. If not, Barry doesn’t care who Snart tells, he’ll put him away. For now, this seems to satisfy both men.

Wrapping up the episode at the coffee house, Caitlin gives Barry a convenient excuse for his outburst to Iris. She makes up a side effect of the lightning strike as reason why Barry confessed his love for Iris. All is again well between Iris, Barry and Eddie, who gives Barry an awkward hug. Then back at the newspaper offices Mason writes his story about Wells but is confronted by Reverse Flash. Wells not only destroys the reporter’s information, he kills him.

Barry begins to second guess his decision to let Snart go, but then sees a news report that Mason Bridge was murdered. In the final scene, he confesses to Joe that he now thinks he was right about all of his suspicions about Wells:

Barry: I think that you were right about Harrison Wells.
Joe: Which part?
Barry: All of it.

As usual, there were some great lines in the all-around fabulous episode, but really this exchange between Joe and Barry was particularly humorous.

Joe: “You were acting so weird at the crime scene.”

Any thoughts or theories, sound off down below!

Our romance-themed entertainment site is on a mission to help you find the best period dramas, romance movies, TV shows, and books. Other topics include Jane Austen, Classic Hollywood, TV Couples, Fairy Tales, Romantic Living, Romanticism, and more. We’re damsels not in distress fighting for the all-new optimistic Romantic Revolution. Join us and subscribe. For more information, see our About, Old-Fashioned Romance 101, Modern Romanticism 101, and Romantic Living 101.
Pin this article to read later! And make sure to follow us on Pinterest.
By Rissi JC on March 25th, 2015