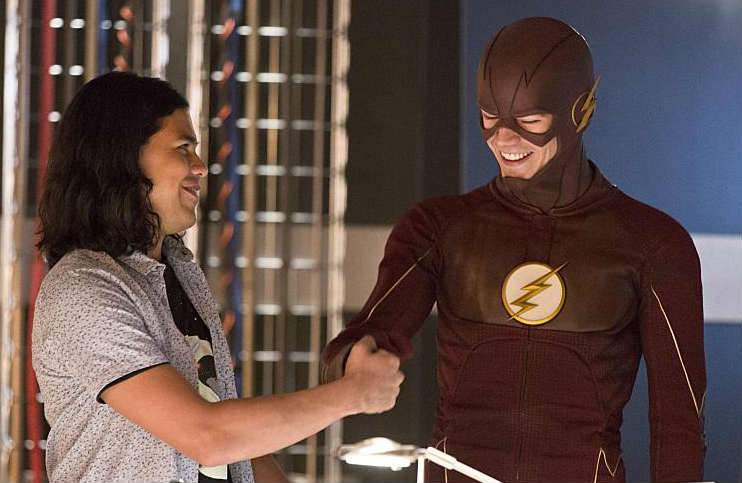 As all comic book adaptations are prone to do, the hero’s nemesis always returns to haunt him. Peace never lasts in these universes as one of The Flash’s most dangerous (because he knows who Barry is!) enemies returns in The Family of Rogues. But look closer and you just might see a different perspective. 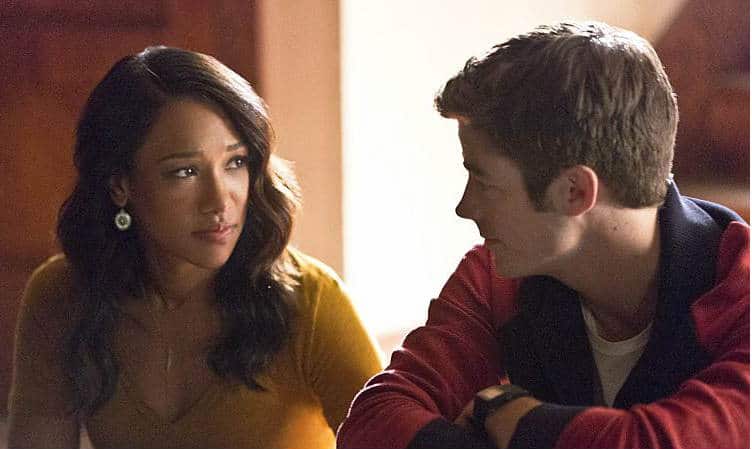 Last night’s episode began, surprisingly, with Iris in a very Smallville like scene. Her pursuit of a hot story leads her straight toward danger where she’s dodging bullets. Who does she call? Barry, of course. Asking her to trust him, he tells her to jump out a window. Naturally, he’s there to catch her and Iris gets her front page story, a risk that seems to have paid off for the reporter. 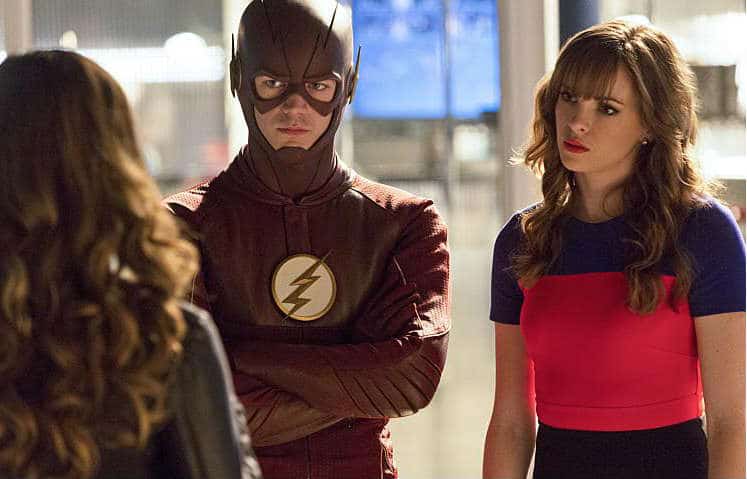 Lisa Snart is back in town, and she’s looking for help from Cisco and The Flash. Being thoroughly confused when it comes to Lisa, Cisco and Barry agree to listen despite Caitlin’s voice of reason. Lisa brings news of Leonard aka Captain Cold’s kidnapping. The Flash agrees to look into her claim only to find Leonard well and acting of his own free will. Not only that, but Cold seems to be working with his father. Clearly, Lisa has some explaining to do. 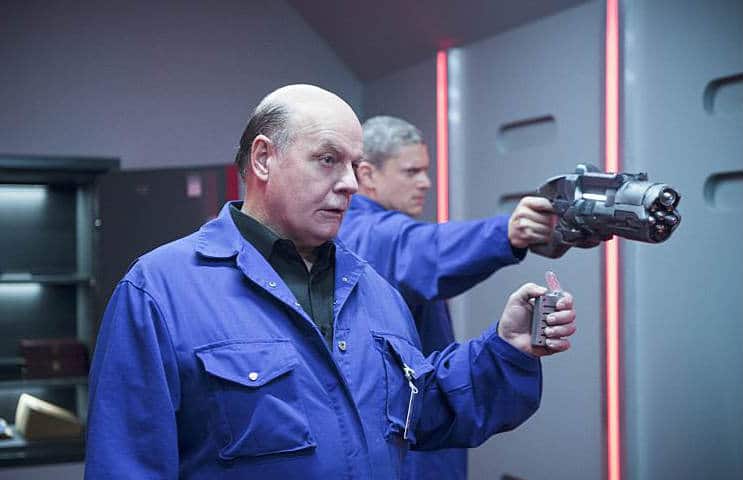 Once back at S.T.A.R. Labs, Lisa explains the reason why her brother couldn’t possibly be working with her father. He was abusive. On multiple occasions, he abused her, and Leonard was the only one to protect her. Meanwhile, her brother Leonard plans a heist with his father, the likes of which involves killing his techno safecracker.

This gives the CCPD a case and us another glimpse of Detective Patty Spivot. Barry learns the cause of death is a bomb planted inside the victim’s head. This gets him thinking further, what if the reason Leonard is working with his father is protecting Lisa’s life? Sure enough, Cisco and Caitlin’s exam reveals Lisa has a bomb implanted in her brain. Barry’s bright idea is to join the Snart’s crew to buy them time to save Lisa. Once he performs his role in the heist (opening a secure door), Lewis Snart disposes of Barry with a bullet… 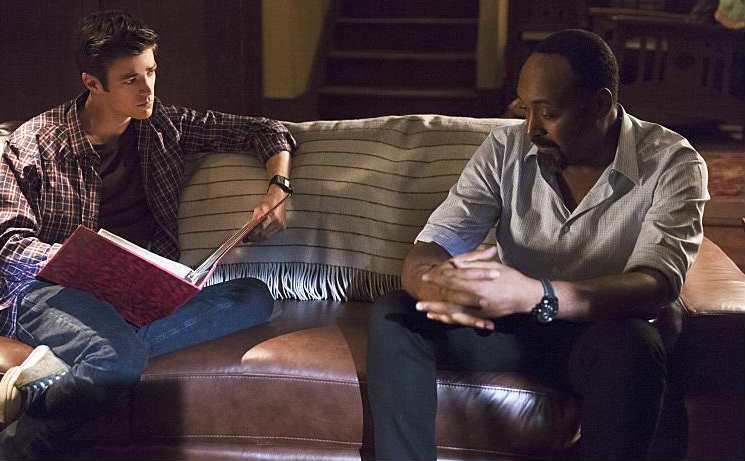 Elsewhere, Joe must again face his past when he meets up with his wife, Francine. After leaving her with a wad of cash and a request, she leaves, and he confides in Barry. Naturally, Barry urges him to tell Iris. At the first opportunity, Joe does just this. Though she takes a moment to process the news that her mother is alive, Iris accepts the story her father has to share. Francine was a drug addict who disappeared never to be seen again in 20 some years. Rather than let Iris live with feeling like she wasn’t good enough, Joe told her and everyone, she was dead.

The bullet racing towards Barry’s heart is stopped by Barry’s quick reflexes. He then returns to stop the Snarts as The Flash. Leonard is prepared to again stop Barry from preventing the heist for the sake of his sister, but Cisco’s invention displaces the bomb. Instead of using his weapon on Barry, he turns it on his father, which puts him in jail for murder. It’s there that Barry visits Leonard, reminding him that he does have goodness in him. The way he protected Lisa reveals that about him if nothing else does.

While unimportant to the scope of this episode, I just have to make mention of Patty again. I adore this character and really want to see her more. To learn more about her and see what she’s really made of. There is a particularly cute scene between her and Barry in the coffee shop that’s full of potential and meet-cute flirting. I know Iris and Barry seem to be endgame (thanks to Wells’ futuristic knowledge), but I personally feel that anyone else with Barry is better suited.

Jay Garrick is working to return home to his world, which depends on making repairs and modifications to the lab portal. Though Barry’s attempt to prove it takes a speedster to make use of it proves fruitless, the scientists set to work making it usable. Eventually, they fix what needs adjusting and in the final minutes, Jay says his goodbyes. This is much to the dismay of Caitlin (who looked cute with her new bangs). It would seem the doctor has grown fond of their new team member.

But the real shocker doesn’t happen until after this. Professor Stein, who seemed on his way to recovery after his recent health scare, combusts into red then blue flames before collapsing. And then there is the return of Harrison Wells who enters the labs through the basement portal. Wells is again back in The Flash’s life. Whether it’s the second earth Wells or the Wells we know matters not (though it is likely second earth Wells). I suspect he’s up to no good either way.

– The flirty moments were in full force last night. Between Lisa and Cisco, Patty and Barry (more please!) or Caitlin and Jay, there are several romances setting up. Jay leaves, but it’s not for lack of Caitlin trying to keep him around. It’d be nice to see her enjoy life again after tragic origins. Which, if any, are you wishing to further develop?

– Life for the West family is about to endure a bit of an upheaval I suspect. But I like this story line for Iris… depending on what the writers do with it. They’ve already bucked the TV normal by having Iris understand her father’s reasons (three cheers!), so I hope the relationship with her mother doesn’t follow the safe path.

– Given CW’s upcoming spin-off, Legends of Tomorrow, this episode seemed to serve as a kind of a tease to that premiere. There was a small sliver of potential and redemption in Captain Cold and Barry’s visit to him in prison further cemented that.

What did you think of Tuesday’s installment, The Family of Rogues? As always, I’d love to read your thoughts. They’re most welcome.

Our romance-themed entertainment site is on a mission to help you find the best period dramas, romance movies, TV shows, and books. Other topics include Jane Austen, Classic Hollywood, TV Couples, Fairy Tales, Romantic Living, Romanticism, and more. We’re damsels not in distress fighting for the all-new optimistic Romantic Revolution. Join us and subscribe. For more information, see our About, Old-Fashioned Romance 101, Modern Romanticism 101, and Romantic Living 101.
Pin this article to read later! And make sure to follow us on Pinterest.
By Rissi JC on October 21st, 2015