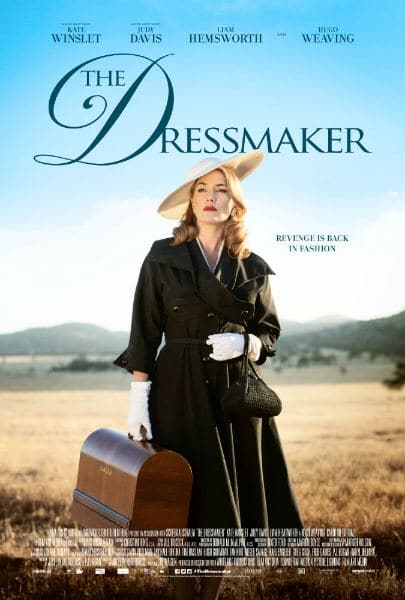 Based on the best-selling Gothic Australian novel by Rosalie Ham, The Dressmaker is a period revenge dramedy with elements of romance, black comedy, satire, and tragedy. And with an all-star cast including Kate Winslet, Judy Davis, Liam Hemsworth, Hugo Weaving, Kerry Fox, and more, you know you’re in for quite the entertaining ride – albeit a strange one.

The Dressmaker tells the story of a glamorous dressmaker, Tilly Dunnage (Kate Winslet), who returns to her small hometown of the fictional Dungatar in Australia after being wrongly sent away 25 years earlier when she was a child. She returns to take care of her ailing mother, Molly (Davis), and to exact revenge on the townsfolk who wronged her. Meanwhile, she transforms the women of the town with haute couture and falls in love with a childhood friend (Hemsworth).

There is something refreshing about The Dressmaker and even cathartically enjoyable.

There is something refreshing about The Dressmaker and even cathartically enjoyable. If you’ve ever felt the brunt of bullying, you can’t help but root for Tilly. The screenwriter/director, Jocelyn Moorhouse, described the story as “Clint Eastwood’s Unforgiven with a sewing machine.” And I can’t think of a more fitting description.

While some scenes are hilariously funny (you do have to appreciate satire and black comedy) other scenes break your heart. And yet, everything happens in the story just as it should. And by the end, you’ll be cheering for Tilly – even if her choices are morally questionable. But this story isn’t to be taken literally after all.

Besides the witty and clever screenplay from Moorhouse and P.J. Hogan, the acting in the production is also fantastic. In fact, you have some of the most talented actors in the industry (including lesser known talents such as Barry Otto) playing each part to comedic perfection. Winslet especially shines in the glamorous femme fatale role looking as gorgeous as ever in her ‘50s costumes and bright red lipstick. Her nuanced performance is one of her best.

Judy Davis as Tilly’s mother, Mad Molly, gives an award-worthy performance that switches between brilliant comedy and heartbreaking tragedy. And Winslet and Davis onscreen together is movie magic!

Hugo Weaving, on the other hand, plays the town sheriff who has a weakness for high fashion and secretly enjoys wearing women dresses. Despite how he wronged Tilly in the past, he proves to be an ally in surprising ways. He gives a warm performance in a role different than what the audience may be used to seeing him play (IE: Lord of the Rings).

The most surprising performance, however, belongs to Liam Hemsworth mostly because he proves he can actually act! Not to mention, he holds his own opposite Winslet. Now, I admit some suspension of disbelief is required as Hemsworth and Winslet are both playing the same age (mid-thirties). But as the film has more of the quality of a play than a realistic film, the age difference doesn’t really feel like one. And their chemistry is actually quite good. I enjoyed their romance together and appreciated his loyalty to Tilly in the midst of a judgmental and gossipy town.

On top of the acting and production quality, I would be remiss if I didn’t bring up the beautiful costume designs from Marion Boyce (Miss Fisher’s Murder Mysteries) and Margot Wilson. They are simply stunning! If you’re a fan of glamour and fashion, just seeing what each character will wear next makes the film worth watching if for nothing else.

Now, I should warn, The Dressmaker is not a film for everyone. With an eclectic mix of genres and a tone that shifts as often as the costumes change, some viewers might find themselves confused. And if you’re expecting a happily-ever-after story, this might not be the film for you. So, while the ending is completely satisfying, there are some tragic turns in the story.

However, overall, if you enjoy quirky films or dark comedic stories like A Series of Unfortunate Events or Cold Comfort Farm, you should appreciate The Dressmaker.

Where to Watch: You can stream The Dressmaker on Amazon Prime, rent or buy on Amazon, Vudu, Youtube, or iTunes. You can also buy on DVD.

Have you seen The Dressmaker? What did you think? Share your thoughts below!

Our romance-themed entertainment site is on a mission to help you find the best period dramas, romance movies, TV shows, and books. Other topics include Jane Austen, Classic Hollywood, TV Couples, Fairy Tales, Romantic Living, Romanticism, and more. We’re damsels not in distress fighting for the all-new optimistic Romantic Revolution. Join us and subscribe. For more information, see our About, Old-Fashioned Romance 101, Modern Romanticism 101, and Romantic Living 101.
Pin this article to read later! And make sure to follow us on Pinterest.
By Amber Topping on March 23rd, 2017