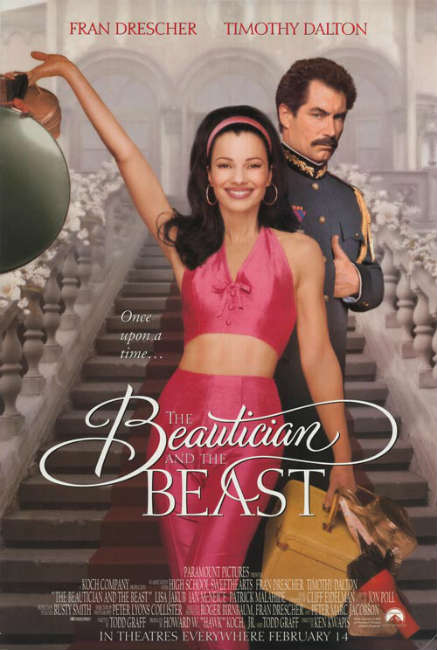 The Beautician and the Beast is not a film for everyone. But if you don’t mind a sassy satire with Fran Drescher in the lead, a lot of Brooklyn humor and a lot of cheesy romance then you may just really enjoy this film. I know I did. But then, I watched every episode of the ‘90s sitcom The Nanny and enjoyed every minute of it. Basically, if you take Beauty and the Beast and mix it with The Sound of Music, The King and I, Jane Eyre, any romantic comedy and, of course, The Nanny, you will find The Beautician and the Beast. It’s a parody of the above-mentioned films with Timothy Dalton cleverly cast as “the Beast,” who has in fact previously portrayed Rochester in the superb ’83 adaptation of Jane Eyre. So this casting was no accident. The character of Boris Pochenko in the film, a dictator and single Dad, is clearly a parody of the Byronic Hero.

The first couple minutes of the film begins with a hilarious cartoon sequence poking fun at Disney cartoons (or specifically Snow White) as Joy Miller (Fran Drescher) dreams of herself as a cartoon figure running from the Prince because she wants to pursue her own ambitions instead of marrying some Prince she doesn’t know. It really is a laugh-out-loud moment.

The film then introduces us to the “real life” Joy Miller, who is a Donna like Doctor Who companion from Brooklyn ready for adventure, but stuck in her monotonous life with an overbearing mother. She’s a beautician who teaches at beauty school but somehow wants more. One day, a student starts a fire in her classroom. She then goes on to save every animal in the classroom with all of her students making it out safely. She’s lauded a hero and plastered all over the newspapers.

Meanwhile, Ira Grushinsky, Pochenko’s diplomatic representative from the (fictional) European country Slovetzia, is in the United States in search of the perfect tutor for Pochenko’s four children. He happens to see the newspaper article about the heroic teacher and tracks Joy down. He offers her the job of a lifetime, not knowing that she’s not really an academic schoolteacher. She accepts, only to arrive in Slovetzia to learn what kind of teacher Pochenko was actually looking for. Ira and Joy keep this misunderstanding to themselves as she takes on teaching the children (who quickly grow to love her). 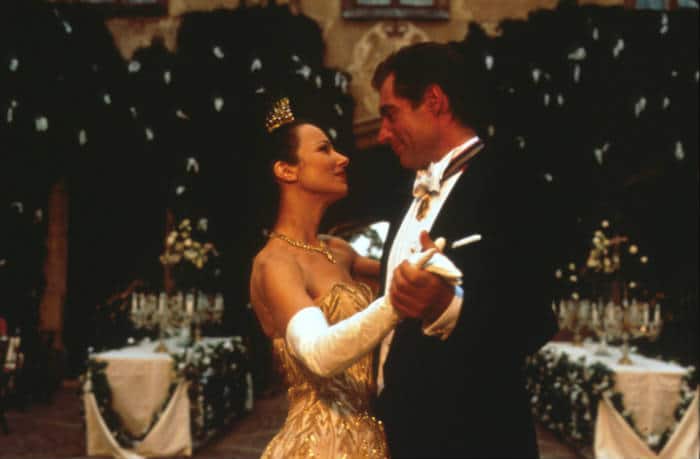 At first, Pochenko and Joy dislike each other. He’s gruff, controlling and well, a dictator. But with her no-nonsense ways and big heart the two grow closer and develop romantic feelings for each other as she helps him be a better leader and a better father. But will the villainous antics of Pochenko’s adviser tear them apart? Or will they live together happily ever after in the big castle as they make the country a better place to live?

The chemistry between Dalton and Drescher is rather sweet and all the characters are likable – if at times exaggerated.

No doubt, this film is a bit silly and over the top. But it’s also quite funny and even witty. The chemistry between Dalton and Drescher is rather sweet and all the characters are likable – if at times exaggerated. Personally, I think Fran Drescher’s comedic talents are often overlooked because people focus in on her voice. But really, she’s quite skilled in comedy, clearly influenced by Lucille Ball. That said, Fran is no “demure” or even “cute” leading lady and may rub some of the audience the wrong way. Personally, I find her to be charming and hilarious. But if you don’t like The Nanny, you won’t like this film.

Overall, if you don’t take The Beautician and the Beast too seriously and enjoy it for what it’s meant to be, then you may like this underrated romantic parody. The film is available on DVD and Netflix.

Our romance-themed entertainment site is on a mission to help you find the best period dramas, romance movies, TV shows, and books. Other topics include Jane Austen, Classic Hollywood, TV Couples, Fairy Tales, Romantic Living, Romanticism, and more. We’re damsels not in distress fighting for the all-new optimistic Romantic Revolution. Join us and subscribe. For more information, see our About, Old-Fashioned Romance 101, Modern Romanticism 101, and Romantic Living 101.
Pin this article to read later! And make sure to follow us on Pinterest.
By Amber Topping on August 7th, 2015