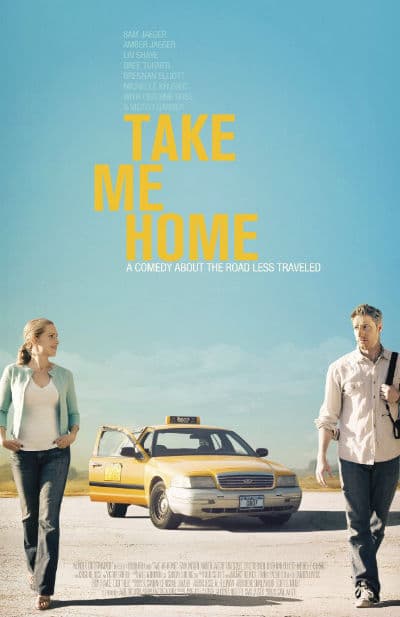 Take Me Home is a 2011 romantic comedy starring real-life married couple, Sam Jaeger (Parenthood) and Amber Jaeger. Sam Jaeger also wrote and directed the film with a clever, heartfelt script most romantics are sure to appreciate. If you’re looking for an enjoyable, sincere romantic comedy then this film is the perfect choice.

Take Me Home tells the story of Thom, a down on his luck photojournalist, who is broke, unemployed, and recently evicted from his apartment. In a way to earn extra cash, he illegally works as a cab driver. It’s then he meets Claire – a successful business woman – who needs a ride. She just learned of her husband’s likely affair as well as the news her father had a heart attack. So, when she flags Thom down, she’s an emotional mess.

Claire asks Thom to just drive. So, that’s what he does. He drives through the night into the morning – all the way to Pennsylvania. From there, the story really picks up. Claire offers him a deal. If he’ll drive her all the way to California (she fears flying), she’ll pay him $1000 a day. Not having any other prospects, he hesitantly agrees.

Of course, this spontaneous road trip doesn’t exactly go as planned. The two face many obstacles along the way as they unmask each other’s hidden truths, flaws, dreams, and imperfections.

At the start, the two are at odds with each other arguing with a witty repartee. The dialogue is at times fast-talking in a battle of the sexes type style reminiscent of the screwball comedies of the ‘30s and ‘40s. While not exactly a screwball, fans of the genre will recognize the influence in this romantic comedy and enjoy the humorous situations the two find themselves in.

Instead of looking for ways to subvert the genre like many filmmakers today, Jaeger smartly decided to focus on good storytelling – which makes the film all the stronger.

One aspect of the film I appreciated was the clever approach to telling this story using old-fashioned romantic comedy tropes while keeping it in a modern world we can relate to. The foundation of the romance builds on two people actually getting to know each other rather than on lust and vulgar scenarios. It was nice to watch a good, old-fashioned romantic comedy that embraces its own genre unabashedly. Instead of looking for ways to subvert the genre like many filmmakers today, Jaeger smartly decided to focus on good storytelling – which makes the film all the stronger.

I also appreciated that the two main characters have flaws. Thom lies, can’t hold a job, steals from his parents, even looks up Claire’s dress while he’s driving. But what makes these flaws work is that there is a transformation at work – and it’s nice to see where the characters end up. His flaws are also not presented in a profane or explicit manner. This is a great example of how a romantic leading man doesn’t necessarily need to be Prince Charming (not that I mind some swoon-worthy charm) to work. It’s how the story is told that ultimately makes a story romantic or not romantic.

Besides good writing, the acting in the film is also great with a lovely authenticity. The chemistry between the two leads energizes the film with a believable synergy that will keep you watching from beginning to end. No surprise since the two are married in real life.

Besides the leads, the supporting cast includes recognizable and talented actors who fill their roles well. They all have small parts but memorable ones. From Victor Garber to Bree Turner, Christine Rose, Lin Shaye, and Brennan Elliot, each person played their brief roles in a way that made the characters feel real rather than two-dimensional stock figures.

While Take Me Home is an imperfect film, it is a wonderful romantic comedy and definitely worth your time if you’re a fan of the genre. You can stream the film on Amazon Prime and Netflix.

Content Note: The film is PG-13 due to mild innuendo.

Have you seen Take Me Home? What are your thoughts on this romantic comedy? Let me know in the comments!

Our romance-themed entertainment site is on a mission to help you find the best period dramas, romance movies, TV shows, and books. Other topics include Jane Austen, Classic Hollywood, TV Couples, Fairy Tales, Romantic Living, Romanticism, and more. We’re damsels not in distress fighting for the all-new optimistic Romantic Revolution. Join us and subscribe. For more information, see our About, Old-Fashioned Romance 101, Modern Romanticism 101, and Romantic Living 101.
Pin this article to read later! And make sure to follow us on Pinterest.
By Amber Topping on October 25th, 2016