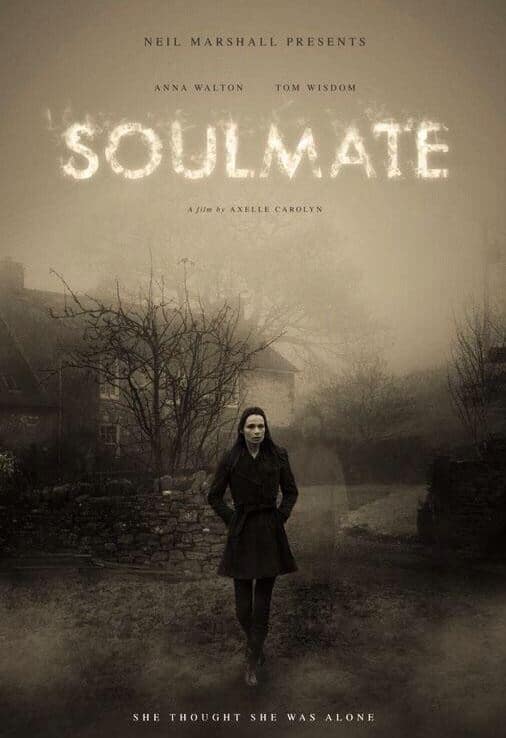 Written and Directed by: Axelle Carolyn

Rating: Ridiculously unrated and banned by the BBFC for an attempted suicide scene (essentially Pg-13 for moderate violence)

Scrolling through Netflix, I recently discovered a hidden little gem called Soulmate (a Mary Shelley International Award and International Fantasy Film Award winner), a ghost story set in the Welsh countryside. After a failed suicide attempt, recently widowed Audrey moves into a cottage to recuperate. Soon, she hears noises and becomes convinced there is an intruder secretly coming into her house at night. The haunting Gothic tale then begins with a mysteriously locked attic door, but what secrets lie within?

Audrey turns to her neighbors Dr. Zellaby and his wife Theresa for answers, but they are evasive and the Doctor abrupt with rudeness. They too hold secrets it seems. When she realizes the noises are connected to the ghost of the suicidal man that lived there, Audrey comes face to face with the ghostly figure and the two become fast friends. Only she can see him because of her own loneliness and suicidal attempt. As the two grow closer, Audrey distances herself from her neighbors. The Doctor doesn’t believe in ghosts after all, and why would he believe her when she is in a grieving, emotional state? Theresa does believe, yet has her own agenda lurking in the background. Then of course important questions begin to emerge, such as whom can she trust? Can she trust the ghost Talbot who’s made her come alive and turn to her music once more?

While on the surface, the premise of the film echoes back to the romantic classic The Ghost and Mrs. Muir, I urge you not to enter this quiet ghost story with similar expectations as the similarities never goes past the surface. Is this film romantic? I leave that up to you decide, though certainly I would categorize this as a Gothic Romance. What is actually beautiful about Axelle Carolyn’s independent film however, are the soft tones used in colors and dialogue. Some may argue the movie moves too slowly. I don’t agree. That is what I loved about it, the gentleness of the scenery, the solitude represented in Audrey’s seclusion from the world of the living and her companionship with a dead man. The symbolism, revealed by the film’s end, brings all Carolyn’s details together perfectly. Sure, the ending does slightly annoy me, but I understand thematically why she went with the ending she chose.

The performances by the leading actors are also moving. Anna Walton as Audrey is so believable that you will watch with a captivated eye on the story she tells with just her eyes looking into the mirror, or looking down at her own self-inflicted wounds on her wrists. Without Walton, this film couldn’t have succeeded as well as it did. Then there is Tom Wisdom as the ghost Talbot. He is charismatic and frightening at the same time. I left the film hoping to see more from these two in the future.

Overall, if you love quieter, character driven thrillers in the same realm as The Others, then give this lesser known movie a chance. As long as you don’t go in expecting a love story like The Ghost and Mrs. Muir, I believe you will enjoy following Audrey’s path from death to life.

Our romance-themed entertainment site is on a mission to help you find the best period dramas, romance movies, TV shows, and books. Other topics include Jane Austen, Classic Hollywood, TV Couples, Fairy Tales, Romantic Living, Romanticism, and more. We’re damsels not in distress fighting for the all-new optimistic Romantic Revolution. Join us and subscribe. For more information, see our About, Old-Fashioned Romance 101, Modern Romanticism 101, and Romantic Living 101.
Pin this article to read later! And make sure to follow us on Pinterest.
By Autumn Topping on November 16th, 2014