The BBC have been running a Gothic season in conjunction with the British Library, because it’s exactly 250 years since the publication of the first Gothic novel, The Castle of Otranto by Horace Walpole, and also the 250th birthday of The Mysteries of Udolpho author, Ann Radcliffe.  I’ve been enjoying the documentary, The Art of Gothic: Britain’s Midnight Hour, as well as radio dramas of The Castle of Otranto and The Mysteries of Udolpho, and thought I would share my thoughts here.

Gothic is a difficult genre to define.  Neither fantasy, horror, mystery or romance, it contains elements of them all, and these different elements attract different people.  While some people are attracted to the dark and ghoulish aspects of Gothic – the vampires and golems etc – I enjoy the mystery, the emotion, the symbolism and the fact that it ultimately draws us back to the medieval.

Gothic started off as a style of architecture, back in the 12th century, with cathedrals like Nôtre Dame and York Minster, and castles like Malbork in Poland.  In the late 18th century, with the emergence of Romanticism, the medieval started to come back into fashion.  Rich landowners built “ruins” and follies on their country estates.  By the 19th century, the Gothic revival had made its way into the cities.  In my home town of Bradford, we have some beautiful Gothic revival architecture in the form of the City Hall and Wool Exchange.

In The Art of Gothic, the presenter Andrew Graham-Dixon suggested that Gothic was born out of anxiety surrounding the Industrial Revolution, and a desire by Georgians to “re-enchant their world” after living for so long in the Age of Reason.  I think we can all relate to that.  We wouldn’t enjoy the stories we do if we didn’t have a desire to escape the modern world and go to a place of adventure, mystery and romance.  This was what 18th-century Gothic novels did for their readers.  They drew on older forms – Shakespeare’s plays, Jacobean revenge tragedies, medieval romances, folklore – to create stories of great emotion that take us to that strange and mysterious place.

Often that place is a castle, as in The Castle of Otranto.  The Mysteries of Udolpho features two castles and an abbey, for good measure!  As we go into the 19th and 20th centuries, it’s more often a country house (think Wuthering Heights, Thornfield Hall or Manderley).

We also encounter the classic Gothic cathedral in Nôtre Dame de Paris (aka The Hunchback of Nôtre Dame) and a castle that is almost a whole world in Gormenghast.  It’s always a place of untold secrets, where something mysterious is hiding behind a door or curtain.  I think this could be where the classic Agatha Christie country house mystery comes from, and also the more innocent variation on the theme in The Secret Garden.

Strangely, I have a recurring dream in which I’m in a huge country house or museum, full of passageways and adjoining rooms.  I’m wandering from room to room, knowing there is something sinister behind one of the doors, but instead of trying to leave the building, I go further and further in.  I guess it must be quite a common thing!

The Mysteries of Udolpho 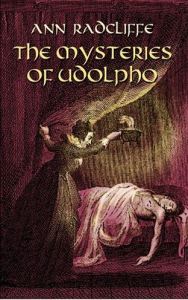 I’d like to spend the remainder of this post talking about The Mysteries of Udolpho by Ann Radcliffe.  I really enjoyed the dramatised version of this, as it is one of those books I had always meant to get around to.  I knew of it mainly because it was parodied by Jane Austen in Northanger Abbey, but didn’t know too much about it otherwise.

It is about a young girl called Emily St Aubert, who goes on a journey with her father that seems to throw up all sorts of mysteries about his past life.  (She also meets the love of her life on the same journey).  Her father then dies, and everything goes wrong.  Her aunt forbids her to see her sweetheart, the ownership of the family home is threatened, and she is ultimately taken with her aunt to the horrible castle of Udolpho, under the control of the sinister Signor Montoni.  There, more mysteries await (including the infamous Black Veil.  What could possibly be behind it?!) and Emily has to fight to regain control of her life, escape the castle, solve the mysteries and be reunited with her love.

The Mysteries of Udolpho was the Twilight of its time, enthralling a whole generation of young people.  In this dramatised version, I found it gave me the same emotional thrills as manga series like Fushigi Yûgi and Bride of the Water God.  I was really rooting for Emily, who seemed just my kind of heroine, and I loved the bittersweet secrets of the past that were revealed. I could see links back to fairy tales – Beauty and the Beast and Bluebeard sprung to mind – and also links forward to novels that were to follow in its wake.  In fact, it’s hard to fully appreciate what it must have been like for the first readers when you’ve already read Wuthering Heights, Jane Eyre and Rebecca – not to mention Northanger Abbey.  But as I said, it was a great adaptation and a great introduction to the novel.

Where do we see the legacy of Ann Radcliffe and her contemporaries today, I wonder?  Is every story about a house full of secrets essentially Gothic?  Share your thoughts in the comments box.

Our romance-themed entertainment site is on a mission to help you find the best period dramas, romance movies, TV shows, and books. Other topics include Jane Austen, Classic Hollywood, TV Couples, Fairy Tales, Romantic Living, Romanticism, and more. We’re damsels not in distress fighting for the all-new optimistic Romantic Revolution. Join us and subscribe. For more information, see our About, Old-Fashioned Romance 101, Modern Romanticism 101, and Romantic Living 101.
Pin this article to read later! And make sure to follow us on Pinterest.
By Elizabeth Hopkinson on November 15th, 2014