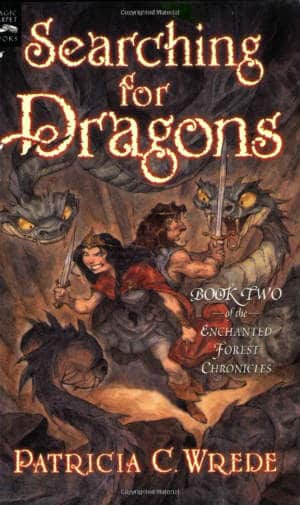 Searching for Dragons by Patricia C. Wrede is the second book in The Enchanted Forest Chronicles. This series, to me, is a delightful fantasy series by a talented author. I say this because Wrede somehow manages to create a fairy tale world that both turns all the fairy tale tropes on their heads and still manages to be a fairy tale.

Wrede also has a knack for convincing her readers to take her world seriously; she writes in a humorous style that can also, at times, convey the seriousness of the situation. Although it can be read on its own, Searching for Dragons really fits better when read with the rest of the series (Dealing With Dragons, Calling on Dragons, Talking To Dragons). The writing style is the same as in the first book, and we only see into the mind of our protagonist.

King Mendanbar of the Enchanted Forest is young and feeling, as shown in the first five pages, a tad overwhelmed. Ruling a magical kingdom, it is made very clear, comes with all the problems faced by an ordinary one, and some new situations, such as conflicts with nightshades, disenchanting people and the political dealings with the Society of Wizards and the Kingdom of Dragons. Our story starts with Mendanbar deciding to take a day off and wander through his domain because his steward Willan is badgering him about marriage again.

Mendanbar, it turns out, has a strange prejudice against princesses because he has never met one with intelligence, which explains his reluctance to get married. After a brush with a particularly selfish and quite determined princess, Mendanbar discovers that a patch of Forest has been burnt. In the burnt landscape, there is A). No magic and B). A collection of dragon scales.

Faced with anger and a bit of surprise, he thought he was on good terms with the Kingdom of Dragon in the Mountains of Morning. Mendanbar takes some advice and seeks out Morwen, the wonderful witch from the first book. She advises him to talk to King Kazul to sort things out quietly before the situation escalates (young radicals, calls for revenge, that sort of thing). Mendanbar, knowing the importance of taking advice during a quest, agrees.

Mendanbar’s wanderings serve to introduce readers to the Enchanted Forest in a way that Cimorene and Kazul’s brief visit in the previous book had not. The Forest is filled with magic and the Kings of the Forest have the ability to use that magic to protect and nurture the kingdom. The book goes into more detail as it goes on, unveiling new information to further advance the plot.

Before Mendanbar can leave to see Kazul, Zemenar, head of the Society of Wizards, arrives and tries to form an alliance with him against the Kingdom of Dragons. Being a savvy politician, however, Mendanbar wants to hear the dragons’ side of the story before making any decisions. He also doesn’t trust Zemenar, thinking that he is trying to take advantage of him because he’s a young king. This shows his good instincts, because as readers know from the first book, Wizards are not the most trustworthy bunch in this world.

Mendanbar sets out for the Mountains of Morning and discovers, to his chagrin, the King Kazul both has a princess and is not home. Princess Cimorene, in fact, has as low of an opinion of kings and princes as Mendanbar has of princesses, making their interactions very awkward at first.

It turns out that the Wizards are trying to stir up trouble between the Enchanted Forest and the Dragons and have likely kidnapped Kazul. Cimorene is determined to rescue her, and Mendanbar insists on going with her (the Enchanted Forest is a dangerous place). Thus, the unlikely pair sets out, searching for a dragon.

On their way to find and save Kazul, the unlikely duo meets Telemain-a magician who travels with them, Herman-who can spin straw into gold, Jack- who trades in magical goods, Ballimore the Giantess and her husband, Prince Rupert-who is trying to be wicked, his nephew Prince Jorillam-who just wants to be abandoned in the Forest, and of course, Morwen and her many cats.

Each character has a different impact on the story, helping our hero and heroine put together the pieces they need to save Kazul. However, it can be assumed that Morwen and Telemain will be the most important overall to the overarching plot. As the story progresses, Mendanbar and Cimorene learn to work together despite their initial prejudices and find out that they make quite an effective team.

Of course, the wizards are up to no good. They not only have Kazul, but they have been draining the Enchanted Forest of its power in places, causing the burned area that Mendanbar saw at the beginning of the book. This means that our intrepid adventurers have to find them, save Kazul and figure out a way to put the magic back into the Forest.

Because I really don’t want to spoil the ending, I’ll just say that, like with the first book, you can probably guess what happens, and like with the first one, the story is solid. I still want a textbook about the history of this world, and perhaps some political science texts as well, but there was enough information for the plot to progress well. I also liked how Wrede expanded on the world she had built in the first book; since there are two more in the series, I predict that the universe will continue to grow and expand.

One thing I always loved about this book is that at one point, when Mendanbar has snuck out of his castle, he is said to have “relaxed a little, but not too much. The Enchanted Forest had its own peculiar rules, and even the King was not exempt from them” (Wrede 1991:9). To me, this is a great reminder that rules are there for a reason and no one should be exempt from them, not even the people in charge. While being King gives Mendanbar privileges that other residents don’t have, he has a lot of added responsibility that goes with that, like having to negotiate with the Wizards and make sure the Forest is safe. But, like the author reminds us, if he eats the wrong plants, he will still turn blue or grow rabbit ears, just like everyone else.

The other thing that I love about this book is that it emphasizes the importance of not judging based on appearances. Not only are Mendanbar and Cimorene wrong about each other, but they are also wrong about Telemain, who looks like a wizard, and Ballimore the Giantess’ husband, who looks terrifying but is really not as frightening as they thought.

Of course, the other important lesson here is the importance of being polite. I think this is a very important point to Ms. Wrede, as both books so far have emphasized how important it is to be polite, especially when it comes to taking the advice of those older than you. Although Mendanbar doesn’t always agree with Willan and dislikes Zemenar, the only being he is ever rude to is the gargoyle (and even those interactions are only borderline rude).

The last thing that I want to mention is the romance. There may be a bit of a spoiler here, so beware. In a lot of ways, the romance here reminded me of Pride and Prejudice or North and South, because Cimorene and Mendanbar had a lot of preconceived notions about the other at the beginning of the book that they eventually learned to get past. While the initial dislike wrapped up fairly quickly (they had to trust each other with their lives, after all!), it moved after that to more of a friends who fell in love sort of relationship, which is my other favorite romantic plot to read. Basically, in one go Wrede made this a very satisfying romantic subplot, without letting it overwhelm the main plot, that of finding the dragon and saving the day. These characters just happened to fall in love along the way, and it was lovely.

Another chapter of a series filled with adventure, romance, humor and the politics of magical kingdoms? Yes please! I look forward to Books 3 and 4 to find out what happens next to these characters and their kingdoms.

At the risk of saying exactly what I said about the first book, I think this would be an amazing second entry in a delightfully whimsy-filled quartet of films. I think that, with modern technology, the dragons and other enchanted aspects of the film could be portrayed on screen in a more realistic sense. And, as before, I have some casting ideas! Here, as before, we have Jemima West as Cimorene, Colin Morgan as Mendanbar, Emma Thompson as the voice of Kazul, and Emma Stone as Morwen. This time, I want to add Sam Neill as Willan (or Zemenar. I feel like he could pull off both parts) and Charlie Cox as Telemain.

Who would you cast in The Enchanted Forest Chronicles? Sam Neill as Willan or Zemenar (or neither)?

Our romance-themed entertainment site is on a mission to help you find the best period dramas, romance movies, TV shows, and books. Other topics include Jane Austen, Classic Hollywood, TV Couples, Fairy Tales, Romantic Living, Romanticism, and more. We’re damsels not in distress fighting for the all-new optimistic Romantic Revolution. Join us and subscribe. For more information, see our About, Old-Fashioned Romance 101, Modern Romanticism 101, and Romantic Living 101.
Pin this article to read later! And make sure to follow us on Pinterest.
By Bailey Cavender on August 11th, 2015