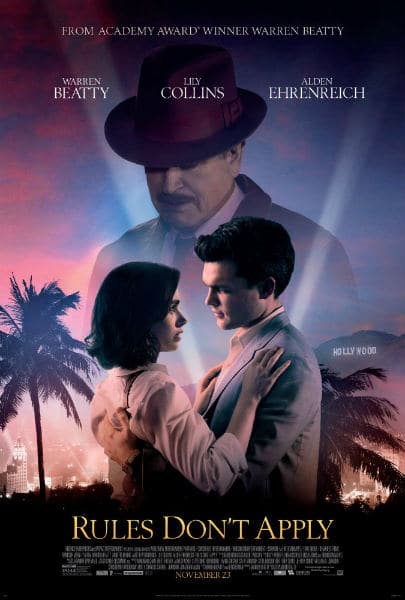 To understand the strange, quirky appeal of Warren Beatty’s long-awaited film, Rules Don’t Apply, you have to let the opening quote sink in:

Now take that quote, add the title, Rules Don’t Apply and then apply both to Warren Beatty as a storyteller and you have a good idea of what to imagine. Both Screenwriter and Director, Beatty was going to make the film he wanted to make despite what anyone else thinks of it and the blatant historical inaccuracies within (remember the quote above). Beatty’s being cheeky after all.

More fantasy than fact (no doubt this was purposeful), this romantic dramedy is old school Hollywood entertainment at its best. If you love the glamour of Old-Hollywood, screwball comedies, witty dialogue, and period romance, then Rules Don’t Apply is a must-see film. Not to mention, this movie easily boasts the best ensemble of 2016 (by names alone). 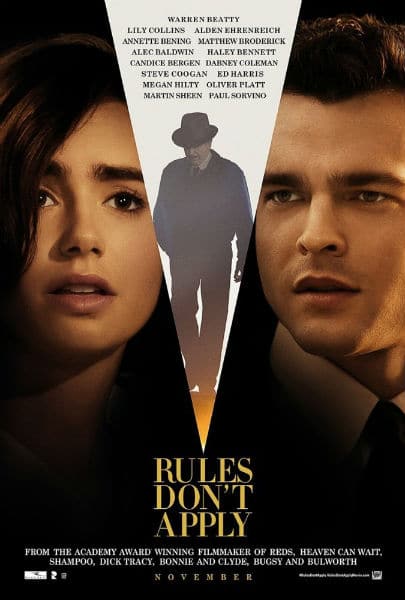 A quick rundown of the cast. The two leads are played with charisma by the Golden Globe nominated Lily Collins and the talented Alden Ehrenreich (who was recently cast as the young Han Solo and reminds me of a young Leo Dicaprio). And then you have Warren Beatty who gives an award-worthy performance as the eccentric Howard Hughes. In supporting roles and/or cameo appearances you have Matthew Broderick, Annette Bening, Oliver Platt, Candice Bergen, Alec Baldwin, Steve Coogan, Martin Sheen, Haley Bennett, Paul Schneider, Megan Hilty, Ed Harris, and even Amy Madigan. Wow, that’s a mouthful! And I’m sure there’s still a couple more I’m forgetting.

Part romantic comedy, part screwball comedy, Hollywood biopic, and even romantic period drama, Rules Don’t Apply tells the story of an aspiring young actress, Marla (Lily Collins) who moves to Hollywood in 1958 to be a contract actress for Howard Hughes. An attraction grows between her and her driver, Frank, who also happens to be Hughes’ chauffeur. Unfortunately, Howard Hughes has a strange rule that contract actresses can’t date his drivers. Otherwise, they’ll both be fired. To add to the star-crossed rules, the two also come from religious backgrounds soon put to the test as their attraction grows and the Hollywood scene begins to change them.

Meanwhile, Howard Hughes develops a relationship with each of them that interconnects the story in intriguing ways. 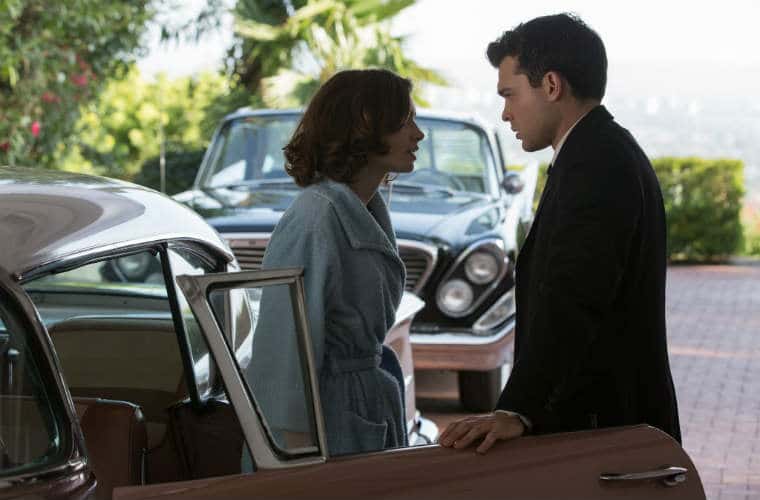 While the film meshes a few genres together, at the heart of the film is the romance between Marla and Frank. The two actors have a wonderful chemistry that mostly relies on longing stares and unspoken words. And while the romance could have been stronger with a little more development and a little less awkwardness due to Frank already having a girlfriend, overall, you still root for these two to rise above their situations and be together. Romantics will especially appreciate the sweeping music influenced by classic cinema that brings out the romantic emotions in what is mostly a comedic film.

Besides the romance, the screenplay is also quite good with witty one-liners and believable character development. The clever screenplay includes dialogue like the exchange between daughter (Collins) and mother (Bening) seen below:

“You know, they say in Hollywood, a girl can get in trouble for having a case of the smarts,” Marla says to her mother.

“Not just in Hollywood, honey,” Lucy replies in a dry aside.

However, the best lines fall to Beatty as Hughes and the angry clients who react to his eccentric refusal to meet them face to face – which ultimately leads to a 600+ million-dollar lawsuit. So, even if you don’t enjoy the romance, the comedy in the film and the reactions of all the characters dealing with the oddities and strangeness of Hughes is laugh-out-loud hilarious. Alec Baldwin and Oliver Platt are particular scene stealers even with their small roles.

Warren Beatty And Other Thoughts 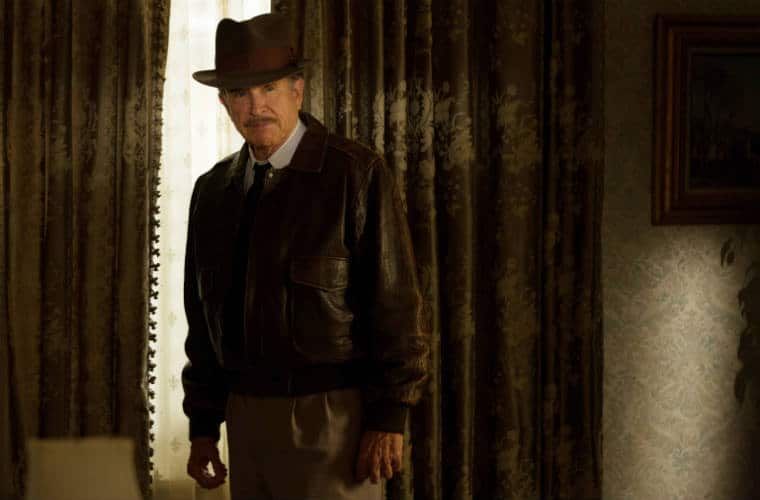 However, while I enjoyed the film from start to finish (with it easily being one of my favorites of 2016), there were a couple of elements I felt could have been stronger. It’s these elements the critics ultimately exaggerated. Or perhaps they placed their expectations too high and got an apple when they were expecting an orange? Whatever the case, the film is much better and funnier than some of the reviews would have you believe. Yes, there were a few scenes where the timelines could have been clearer. And yes, the romance between Marla and Frank could have had more development. Still, these elements did not affect the overall quality of the film which was quite hilarious – and at times even touching. The latter due in part to Beatty’s nuanced performance.

In fact, Warren Beatty was robbed of a Best Supporting Actor nomination. He absolutely deserved it. If you enjoyed Kenneth Branagh’s performance as Laurence Olivier in My Week With Marilyn (in many ways, a similar type of film), then you’ll love Beatty as Howard Hughes.

Besides the performances and writing, the costume design, production design, cinematography, and musical score were all impressive as well. I especially loved the original song, “Rules Don’t Apply” sung by Lily Collins in the film. The catchy, old-fashioned tune also probably deserved an Oscar Nomination. 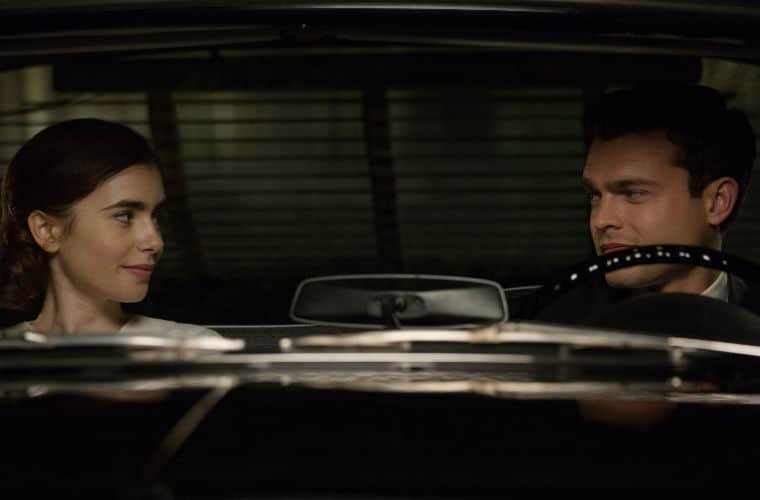 Overall, while this isn’t some serious biopic with Beatty as Hughes (what many have waited to see for 40 years), it is an entertaining movie that takes the elements of old-fashioned storytelling and twists it into a contemporary romantic comedy sure to leave a smile on the faces of those who believe in happily ever after.

Where to Watch: Rules Don’t Apply is now available on DVD and digital.

Our romance-themed entertainment site is on a mission to help you find the best period dramas, romance movies, TV shows, and books. Other topics include Jane Austen, Classic Hollywood, TV Couples, Fairy Tales, Romantic Living, Romanticism, and more. We’re damsels not in distress fighting for the all-new optimistic Romantic Revolution. Join us and subscribe. For more information, see our About, Old-Fashioned Romance 101, Modern Romanticism 101, and Romantic Living 101.
Pin this article to read later! And make sure to follow us on Pinterest.
By Amber Topping on March 3rd, 2017