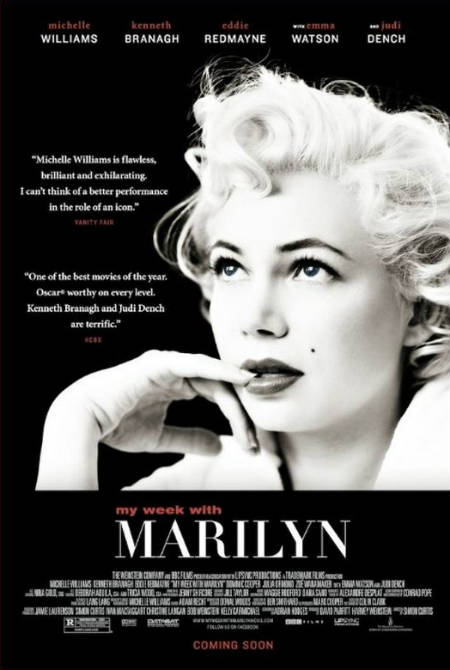 My Week with Marilyn Film Review

I don’t know why it took me a few years to watch this film, but I finally got around to it and loved every second of it. It’s a gorgeously shot period drama with a brilliant cast (especially Kenneth Branagh as Olivier), beautiful costumes, witty dialogue and more. The story of a young filmmaker’s time working with Monroe and Olivier on a now classic film, is a must see for all film history enthusiasts.

The story of a young filmmaker’s time working with Monroe and Olivier on a now classic film, is a must see for all film history enthusiasts.

My Week with Marilyn is based on the journal entries of Colin Clark, the young assistant who worked on the famous film The Prince and the Showgirl with Marilyn Monroe and Laurence Olivier. So it’s a biopic of sorts about Colin and his perspective of the conflict during filming between Olivier and Monroe due to her chronic lateness and many demands as well as his bad temper because of it. Over time, Colin becomes intrigued with the anxiety driven starlet plagued with insecurities and falls for her. How truthful his accounts are of the romantic week he shared with Monroe are questionable, but from a narrative perspective it is completely entertaining. The story honestly just plays into the enigma surrounding Monroe, while also making her feel very real. The film is rather a fun fairy tale of what it was like working on a film with a few of Hollywood’s greatest stars.

One of my favorite aspects of the film was the actual cast. Every part was cast to perfection, from the leads down to the bit parts. There’s Eddie Redmayne (now of The Theory of Everything fame) as Colin, Michelle Williams as Monroe, Kenneth Branagh as Olivier, Julia Ormond as Vivien Leigh, Emma Watson as Lucy (the wardrobe assistant Colin fancies at first), Dougray Scott as Arthur Miller, Judi Dench as Dame Sybil, Dominic Cooper as Milton Greene and more. On a fun note, if you’re a fan of British film and television, this movie should be a lovely surprise as even the small parts are largely filled by familiar British actors. It’s like cameo after cameo – even if that was not the intention.

And while everyone in My Week with Marilyn is great, it’s Kenneth Branagh (who received a Best Supporting Actor nomination for this role) who steals the film. Yes, he doesn’t quite look like the dark-haired broody Olivier, but he captures his essence. Not only that, he is hilarious. His OCD like tantrums over Monroe’s over the top Method acting and lack of professionalism is great fun to watch. He plays Olivier with the perfect blend of ego, humanity and star power. If you’ve ever known anyone who has a tendency to be late to everything and then be completely unaware of how that actually effects everyone, then you’ll find Olivier’s freak outs rather amusing even if he doesn’t handle himself in the best way.

I also felt the script from Adrian Hodges (a popular British TV writer) was engaging, dramatic and even quite funny. With his writing and Simon Curtis’s fantastic direction, they were able to three dimensionally capture some of Hollywood’s most iconic stars. In the film they feel like real flesh and blood humans rather than just the personas we know them as.

As far as the romance between Colin and Monroe, while it was interesting, Monroe’s fragile state made it rather difficult to actually root for Colin and Marilyn to ride off into the sunset together. Still, the chemistry between Redmayne and Williams was good and their “romance” entertaining. Williams was able to bring out a vulnerability that helps you root for Marilyn, even though she’s also portrayed as a demanding actress quite difficult to work with. Plus, Colin’s no saint either who rather callously ditches the beautiful Lucy (played by the always great Emma Watson) to spend more time with the famous Monroe. Still, these imperfect characters make for a near perfect film.

Basically, if you love Marilyn Monroe, Laurence Olivier, film history, period drama, romance or even a good BBC like production, then go see the film. It will definitely be worth your time.

CONTENT NOTE: This is Rated R, but a very mild one. While there is a little nudity, this is basically PG-13 with a few extra F words.

Check out our Vintage Review: All This and Heaven Too – A Heartbreaking Romance

Our romance-themed entertainment site is on a mission to help you find the best period dramas, romance movies, TV shows, and books. Other topics include Jane Austen, Classic Hollywood, TV Couples, Fairy Tales, Romantic Living, Romanticism, and more. We’re damsels not in distress fighting for the all-new optimistic Romantic Revolution. Join us and subscribe. For more information, see our About, Old-Fashioned Romance 101, Modern Romanticism 101, and Romantic Living 101.
Pin this article to read later! And make sure to follow us on Pinterest.
By Amber Topping on March 8th, 2015