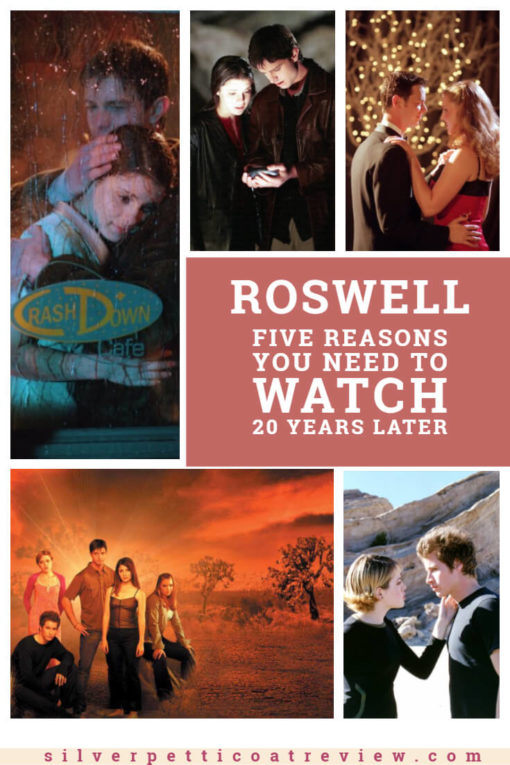 Roswell was one of the best teen series of the ’90s.

The Roswell TV Show premiered 20 years ago today on October 6, 1999, on the WB. Where have all the years gone? It feels like yesterday me and my friends held weekly Roswell parties to watch our favorite show. We hoped for Max, an alien, and Liz, a human, to find a way to be together finally! The show just had it all: gripping cliffhangers, an exquisite star-crossed romance, and writing that was literally out of this world.

Now, looking back, 20 years later, Roswell still resonates with fans and finds new viewers through online streaming. Amazingly enough, the show still holds up because of the talent in front of and behind the camera. This ‘90s cult genre teen show about aliens went under the radar. Maybe even under your radar. And if that’s the case, here’s why you NEED to watch one of the best supernatural shows ever created, twenty years late.

However, Roswell is not to be confused with the new adaptation Roswell, New Mexico. While the latter is an entertaining series, it’s not nearly as good.

I had to begin with the love stories because at the heart of Roswell is a star-crossed romance between Max, an alien, and Liz, the human he loves. The flawless pilot episode begins with a literal bang when a bystander shoots Liz accidentally at her parents’ café. Max, who has kept his secrets hidden even from his adopted parents, decides to save her with his alien healing ability.

Of course, saving her puts his own life in danger, threatening to reveal not only his identity but that of his sister Isabel and best friend, Michael. Soon, Max and Liz fall in love, but several believable obstacles stand in the way. And that’s just part of why we love and root for them. I mean, Max’s brooding stares could make any girl swoon.

Aside from the textbook chemistry between the thoughtful and swoony Max and the well-developed and intelligent Liz (you seriously could not have cast these two any better) are the fantastic romantic storylines between Michael and Maria and Alex and Isabel. Trust me; you’ll fall in love with all of these awesome couples.

In all, if you’re looking for a supernatural genre show with absolutely incredible romantic chemistry AND dynamic storytelling, this is the series for you.

Okay, so the romances were epic, but so were the friendships. The friendship chemistry in Roswell was seriously on point. You believe Liz, Maria, and Alex are best friends, and their conversations are hilarious.

But the friendships and sibling chemistry with Max, Isabel, and Michael was also authentic. Everything works effortlessly. And thankfully, the writers throw in excellent characterization and humor to make Roswell must-watch television.

Jason Katims, the creator of Roswell, went on to write the critically acclaimed and character-driven shows Parenthood and Friday Night Lights. So, imagine a genre show with that level of character-based writing, and perhaps you will begin to see just how unique the screenwriting of a lesser-known genre teen series is.

But aside from Jason Katims, who excels at characterization and human relationships, is the ever so critical science fiction worldbuilding present in Roswell. Welcome Star Trek writer Ronald D. Moore in season 2 just a few years before his impressive remake of Battlestar Galactica.

He weaved in fantastic sci-fi mythology to Roswell’s romantic and character-driven storylines. That kind of a combo between Katims and Moore was terrific to see in action. On a side note, Ronald D. Moore also went on to write Outlander. So the guy understands romance and time travel.

As for the actors, as I’ve stated before, they were all perfectly cast. But for those unfamiliar with the series, you may recognize a few actors and actresses before they went on to more familiar roles. From Katherine Heigl, William Sadler, Shiri Appleby, Emilie de Ravin, Nick Wechsler, to Colin Hanks, the show discovered some great talents. While others like Jason Behr, Majandra Delfino, and Brendan Fehr aren’t big names, they have all stayed successful for a reason.

Now for some exciting 20th-anniversary news! The Roswell, New Mexico panel at New York Comic Con has just announced Jason Behr has a new multi-episode arc on Roswell, New Mexico. Plus, Shiri Appleby plans to direct an episode with him in it! I may even tune back into the show for this!

Can anyone forget that epic moment when Max travels from the future to tell Liz she can’t fall in love with him? Or that dance? Evil aliens and clones; Tess finally getting her comeuppance. Overall, the imaginative storytelling weaves seamlessly into this romantic sci-fi series. Sure, the show falters in season 3, but the finale makes up for some of the season’s weaknesses.

Look, the reason Roswell worked so well as a teen show is that Jason Katims brilliantly took real teen problems and magnetized them with a cool alien theme. Sometimes, being a teenager makes you feel foreign, like an outcast. So, what happens if you’re both an actual alien and a hormonal teenager coming of age in Roswell, New Mexico? What happens if your secrets are threatened to be exposed? What if you are in danger from a school counselor or sheriff and that your fears of authority are real?

There are several reasons why Roswell still works today. But the metaphor of aliens as teenagers has never been done better than as in Roswell.

Overall, Roswell is more than just a romance or sci-fi show. It’s a series with brilliant writing and characters everyone can relate to whether you’re a teen today or an adult looking twenty years back.

Humor, witty banter, and to die for chemistry, deserves a moment of remembrance just for them. I mean, watch this SPOILERY video of some of their best emotional scenes, and you’ll see what I mean:

Where to Watch Roswell (1999): You can stream on Hulu and Fubo TV. You can also buy on digital and DVD.

What’s your favorite part of Roswell? Do you have any favorite memories? Do you plan to give this underrated series a chance twenty years later? Are you planning to watch Jason Behr’s exciting new role in Roswell, New Mexico? Sound off below.