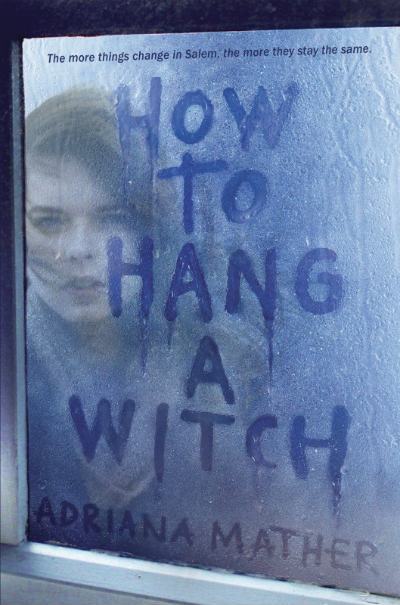 Salem, Massachusetts is the site of the infamous witch trials and the new home of Samantha Mather. Recently transplanted from New York City, Sam and her stepmother are not exactly welcomed with open arms. Sam is the descendant of Cotton Mather, one of the men responsible for those trials and almost immediately, she becomes the enemy of a group of girls who call themselves The Descendants. And guess who their ancestors were?

If dealing with that weren’t enough, Sam also comes face to face with a real live (well technically dead) ghost. A handsome, angry ghost who wants Sam to stop touching his stuff. But soon Sam discovers she is at the center of a centuries old curse affecting anyone with ties to the trials. Sam must come to terms with the ghost and find a way to work with The Descendants to stop a deadly cycle that has been going on since the first accused witch was hanged. If any town should have learned its lesson, it’s Salem. But history may be about to repeat itself.

How To Hang A Witch Review

How To Hang A Witch captured my interest right from the start. A supernatural romance set in Salem about the witch trials from an author actually descended from Cotton Mather? Yes, please! Using her own connection to her family’s past, Adriana Mather creates something quite unique because the book feels so authentic.

RELATED | Ever the Hunted By Erin Summerill – An Exciting, Romantic and Sweeping Fantasy That Will Keep You Up All Night

Authenticity aside, the book stands on its own as a fantastic YA paranormal romance. Set in contemporary day Salem, Sam moves into her recently deceased grandmother’s house, a grandmother with a whole lot of secrets, secrets connected to a deadly curse and the Salem witch trials. Almost immediately, Sam gets drawn into the town’s curse and will do anything to break it, especially since she thinks it may be the reason her father is in a coma. She wants to save him before it’s too late!

Of course, a handsome boy lives next door and is all too willing to help Sam fit in (cue the start of the infamous YA love triangle). Unfortunately, the Descendants (a group descended from the Salem witches killed by Sam’s ancestor) want to make Sam’s life a living nightmare. Soon, How To Hang A Witch becomes much more than your typical YA paranormal romance, but almost an allegory for how history repeats itself. Salem would never happen again, right? Mather brilliantly shows just how easy it is to go with a crowd and believe false rumors just like Salem of yesteryear. How To Hang A Witch can be both entertaining and a haunting tale about the problems of teenage bullying in modern day, giving the book extra depth and characterization for the main character.

Elsewhere, life at home becomes just as difficult. Sam doesn’t know why but her relationship with her stepmother has become pure ice. And then there’s the problem of the attractive and angry ghost. Over time, Sam builds trust and even begins to fall in love with him. But how can they be together when he is already dead? Honestly, part of why I loved How to Hang A Witch came down to the very readable old-fashioned romance. Because Elijah, the ghost, died in the 17th century, he courts Sam with an old-fashioned flare. The love story becomes more about the small moments rather than lust as the focus. Sometimes, I scratched my head why the next door neighbor needed to be in the novel at all. The scenes with Elijah were much more compelling.

Overall, How To Hang A Witch makes for a great read with several twists and turns that will have you on the edge of your seat! I recommend this one to fans of The Secret Circle, old-fashioned romance, and those of us with a strong interest in Salem history. You won’t be disappointed.

I would love to see How To Hang A Witch as a standalone film. You have murder, an ancient curse, flashbacks to the past that could be made even more epic onscreen, and a great ghostly romance to make hearts swoon. What’s not to love?

As for the cast, British actor Douglas Booth (Great Expectations; Pride and Prejudice and Zombies) would make a great Elijah all decked out in period clothes (which honestly always suits him). Meanwhile, Alycia Debnam-Carey would make a fabulous Sam. She’s best know for Fear the Walking Dead and Lexa on The 100.

What do you think about How To Hang A Witch? Who would you cast as Elijah and Sam? Sound off below…

Our romance-themed entertainment site is on a mission to help you find the best period dramas, romance movies, TV shows, and books. Other topics include Jane Austen, Classic Hollywood, TV Couples, Fairy Tales, Romantic Living, Romanticism, and more. We’re damsels not in distress fighting for the all-new optimistic Romantic Revolution. Join us and subscribe. For more information, see our About, Old-Fashioned Romance 101, Modern Romanticism 101, and Romantic Living 101.
Pin this article to read later! And make sure to follow us on Pinterest.
By Autumn Topping on February 22nd, 2017