THE MOMENT: Michael and Jane kiss in the “snow” as a perfectly timed song plays in the background!

Jane the Virgin is probably the best show on TV right now because it’s a satire on telenovelas that manages to be ridiculous, deep, romantic, current and gets props for being more diverse. The constant emphasis on mother-daughter relationships, familial love, and honesty also make it a touching show amidst crazed villains, hilarious melodrama, and too-tight shirts.The acting from the entire cast is flawless, including star Gina Rodriguez who won a Golden Globe for Best Actress with her powerhouse acting. Plus, I mean, she’s a teacher and aspiring romance writer in the show!

The use of special effects, an omniscient and sarcastic “Latin narrator,” and a lot of captioning during the show make it even more stand-out and unique. It takes telenovela tropes – getting stuck in an elevator, kissing under snowflakes, finding your long-lost father – that, combined with a great background score, make the romance just the right amount of cheesy and believable. A lot of drama ensues between the love triangle on the show, but Jane the Virgin’s self-aware Latin narrator owns the drama and that’s what makes the show so good.

The romance in this show is…too much to handle. Jane and Rafael…or MICHAEL AND JANE?! Jane is engaged to detective Michael at the beginning of the show when she is accidentally inseminated with hottie Rafael’s sperm. Rafael is a reformed playboy who she kissed five years ago. I’ll be honest, this love triangle is the most stressful I’ve seen in a while. Who do you choose?! Your first huge crush and the father of your BABY, or your sweet, caring, best friend fiance who knows you like no other?! We’ve already highlighted a romantic moment between the former on this blog (HERE) but now it’s Michael’s turn!

The Lead In  & An Explanation of My Love For Michael 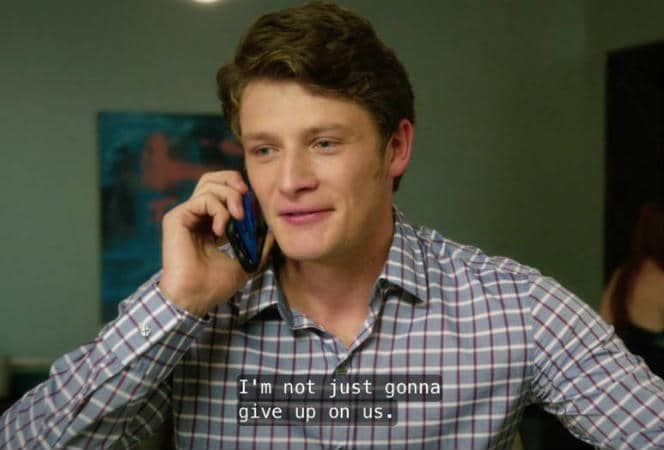 I will admit I am hugely biased writing this since I am #teammichael like no other. Here is a list of why:

In summary, Michael is a tad dorkier, much less attractive, but he knows Jane’s history and he’s funny and sweet. He gets Jane. Rafael’s character isn’t really funny to me, he’s just very hot and she’s having his baby and they have massive sparks. And even though he’s a reformed bad boy, he’s a boring one. It’s weird to see this hunk just being blandly nice to a nerdy teacher-writer like Jane. (Don’t get me wrong, it should definitely happen, but I think Jane could do better.)

Season 2 (thankfully!) starts with a blank slate for our love triangle participators. Jane’s just had the baby, and after he is kidnapped, Michael is named godfather and Jane is technically single since she and Rafael have broken up.

In chapter 26, we pick up after Rafael has kissed Jane. Sensible Jane puts a stop to it, and wants to tell Michael (why? Cuz she still loves him? I think so) but he finds out first through Petra. Admirably, he is not uncontrollably jealous or mad. He tells her later that he knows, saying, “Look, I wasn’t sure whether I should say something, or not say something, but…I think I just have to. I know you kissed Rafael.”

Jane, stuck in a utility closet at this moment, is so surprised that she bumps into a rack of mini-shampoos and Michael comes to unlock the closet for her before she can say more on the subject. Rafael then discovers Jane was hiding in the closet and they have an argument that Michael fleetingly enjoys until he realizes that Petra was probably behind it. This is why I love Michael! Because even though he could watch them argue and hope for Jane to turn to him instead, he’s done meddling and is honest, even if it helps improve Jane and Rafael’s relationship. 🙁

So, looking at Jane, he tells Rafael, “Crazy or not, she’s still in love with you. And she still thinks she has a chance. So if there’s not a chance, you need to tell her.” Pretty sure he’s not talking about Petra anymore, our Latin narrator intones, as Jane looks at Michael helplessly.

Later, Jane texts Michael so they can talk.

He comes over to her house while she’s trying unsuccessfully to zip up her dress. They’re so cute and comfortable with each other that after watching her for a few seconds he says, “Okay I can’t watch you do that, let me,” and Jane turns around for him to zip up her dress. (Oh, snap! Oh, snap! And I don’t mean the snaps on the dress!)

They’re standing close when Michael whispers, “I know I shouldn’t be upset about the kiss. You can kiss whoever you want.” Oh, swoon! The selflessness! The honesty!

JANE: “I just didn’t know whether to tell you or not. Since..it didn’t change anything.”

They both kind of realize the impact of these words…she’s saying that kissing Rafael didn’t mean anything more to her this time. 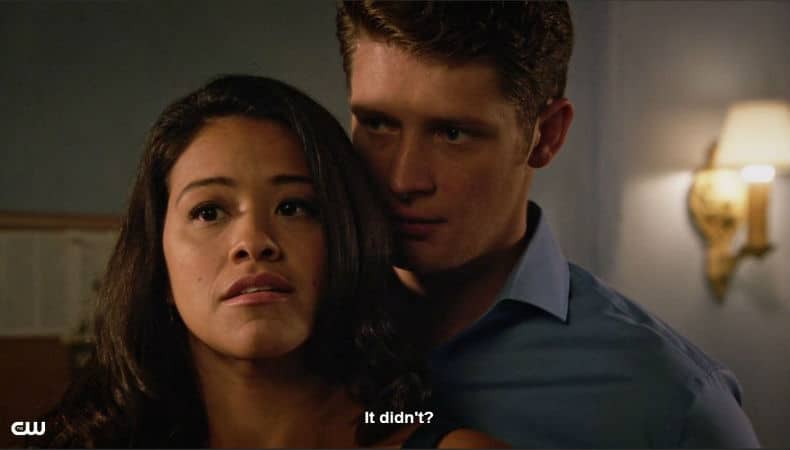 “It didn’t?” Michael asks. “No. But I should have told you. You’ve been so honest with me.” Then Michael confesses something about the Sin Rostro case he’s been hiding, and the romance is on pause. BUT NOT FOR LONG!

Jane goes to the hotel to pick up her baby, Mateo but realizes Rafael has him at her house. She bumps into Michael, and they chat for a minute with the usual electric connection of best friend soulmates. Michael makes Jane laugh and then the staring begins while Surrender by Natalie Taylor starts playing in the background (it was the most perfect song for the scene! I tell you!). 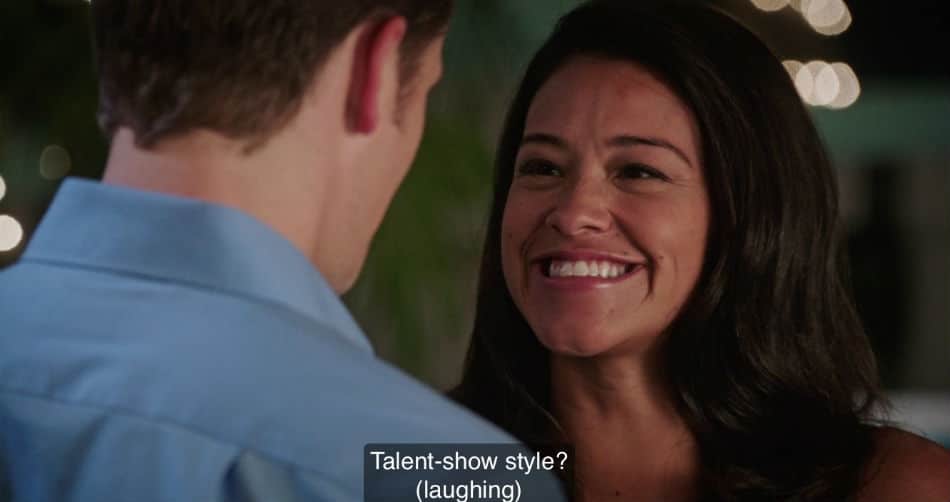 At the end of the kiss, both Latin narrator and Jane say, “Whoa,” because…whoa indeed. This isn’t just one of Rafael and Jane’s many (less meaningful) kisses. This kiss has weight for the two ex-fiancees, who have gone from being heartbroken to awkward to polite acquaintances to friends and finally confidants again. They’re meant for each other and they still love each other despite so many ups and downs.

The sweetest part of this moment is how great Jane feels going home like she’s “walking on air.” This is significant for this episode, which has focused on how overwhelmed Jane has been being a mom and figuring out her social life and relationships.

Also solidifying my love for Michael: he texts her afterward and she totally fangirls.

Um, this scene shows that their love is real, team Rafael! Get at me!

Is misery soon to come because I’ve been conditioned to not expect happiness for too long in these CW shows before they take it all away? Or will they just LET A PERFECT COUPLE BE TOGETHER FOR ONCE IN THEIR LIVES? I AM TALKING TO YOU, CW NETWORK.

How do you feel about this season? Do you love Michael and Jane? Why are there so many pictures of Rafael in this post? Comment below!

You can find Jane the Virgin on Hulu and Netflix. 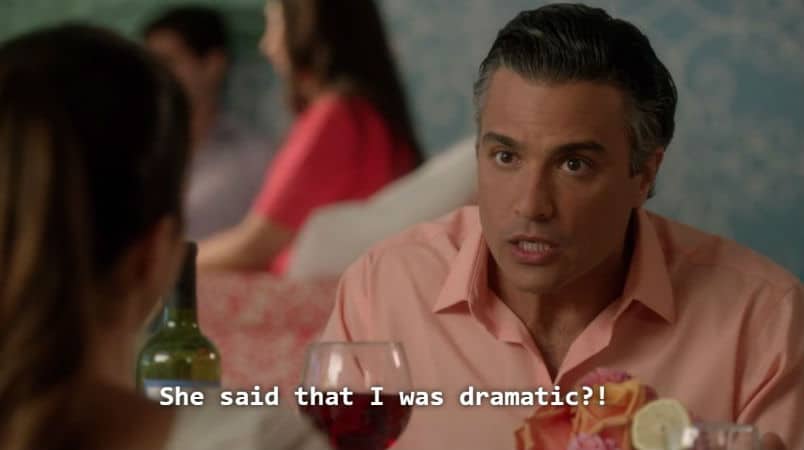 Jaime Camil as Rogelio, Jane’s long-lost father is secretly the best part of the show as an oblivious, egotistical but also somehow self-aware international telenovela star…and he needs you to watch!

Our romance-themed entertainment site is on a mission to help you find the best period dramas, romance movies, TV shows, and books. Other topics include Jane Austen, Classic Hollywood, TV Couples, Fairy Tales, Romantic Living, Romanticism, and more. We’re damsels not in distress fighting for the all-new optimistic Romantic Revolution. Join us and subscribe. For more information, see our About, Old-Fashioned Romance 101, Modern Romanticism 101, and Romantic Living 101.
Pin this article to read later! And make sure to follow us on Pinterest.
By Amirah Yasin on November 7th, 2015