THE TV SHOW: Salvation (2017)
THE PAIR: Darius Tanz (Santiago Cabrera) and Grace Barrows (Jennifer Finnigan)
THE MOMENT: Darius and Grace talk and dance before they think they are going to die.

When Salvation first premiered this past summer, I had very little expectations. Okay, I confess I tuned in because Santiago Cabrera was the leading man (Merlin’s Lancelot; The Musketeers). Plus, every now and then, I love a ridiculous disaster flick. So, a new series about an asteroid coming in collision with earth starring Cabrera was a win-win for my summer TV show hopes.

Certainly, I never expected Salvation to be intensely swoony and romantic. Or that it would be picked up for a second season. A sigh of relief as it shockingly just got picked up this week! I figured a romantic moment would make for the perfect celebration.

The Build Up: Darius and Grace 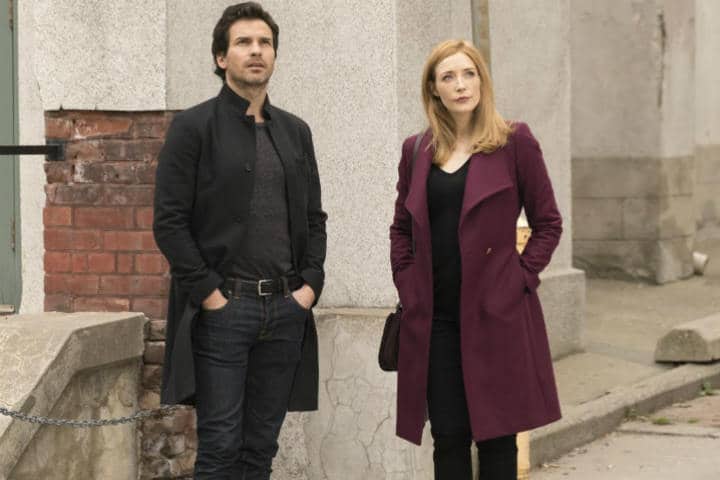 With only six months before the asteroid collides with earth, Grace and Darius turn to each other to save the world. Literally, as the episodes keep building, you realize the show is just one long old-fashioned romance, a romance I never wanted to end. One scene, in particular, stands out, a lovely moment about music and dancing that connects to the end of the season (but I’ll leave that for you to watch).

Throughout season one, Darius and Grace get closer and closer with each episode. And on a clandestine trip to Russia that failed, the two get taken captive and drugged. With the truth drug in their systems, the two open up to one another, believing they don’t have long to live.

“Care to listen to some music before you die?” Darius asks with a music record in hand.

Grace doesn’t want to die in Russia but Darius can’t do anything about that. Instead, he plays Ella Fitzgerald’s romantic song, “The Nearness of You.” As he says, he can “change the ambiance.”

“Dancing?” Grace asks in surprise. She never saw Darius as the romantic type. He disagrees as the music continues to play in the background, the sparks really starting to fly between the two of them.

“I happen to be quite romantic when the right woman comes along. Or even the wrong one for that matter.”

Grace teases Darius about being a player, about making each woman feel like “the one.”

But then their playful tone once again changes as Grace remembers she will likely die soon. And true to his romantic word, the very dashing Darius rushes to her side and caresses her face. Here, just a small touch says everything. Darius had finally found the right woman. It just happens to be at the end of the world.

RELATED | Romantic Moment of the Week: The Musketeers And Romantic Vows

He apologizes for dragging her to Russia but she has no regrets. She did everything she could to save the planet. Darius and Grace laugh sadly and put their heads together, the tension continuously setting our dreamy scene.

And in a scene almost reminiscent of a classic film thanks to the music, Grace asks Darius once more: 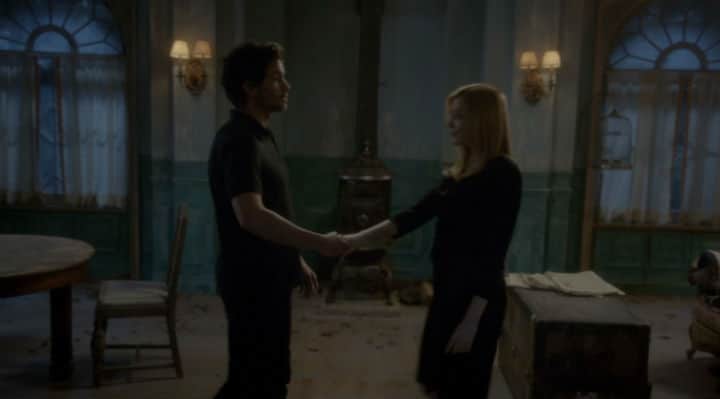 Darius just nods his head. “Me too,” Grace says. So, the two begin dancing without a seeming care in the world, a dance that could have been both their first and last. Grace admits that she likes their dance. Darius smartly replies in Cabrera’s most swoony voice: “And I like you, Grace.” Ever since he saw her at the Croatian embassy. Grace remembers how he kissed her earlier to protect their cover. He apologizes for not asking permission. “Permission granted,” she tells him.

“Both,” Grace answers, ending the scene with a long and passionate kiss. Will they survive? Save the world from an impending asteroid? Thankfully, we have a whole other season to find out how their story ends. One crisis already averted.

You can stream Season One on Amazon Prime, CBS Access, or buy on DVD/Digital.

What did you think about Salvation? The romance between Darius and Grace? Sound off below…

Our romance-themed entertainment site is on a mission to help you find the best period dramas, romance movies, TV shows, and books. Other topics include Jane Austen, Classic Hollywood, TV Couples, Fairy Tales, Romantic Living, Romanticism, and more. We’re damsels not in distress fighting for the all-new optimistic Romantic Revolution. Join us and subscribe. For more information, see our About, Old-Fashioned Romance 101, Modern Romanticism 101, and Romantic Living 101.
Pin this article to read later! And make sure to follow us on Pinterest.
By Autumn Topping on October 21st, 2017