THE MOMENT: Ha-Ram chooses to forgive and hold on to Black/Moo-Gang

THE QUICK OVERVIEW – DEATH IN A BORROWED BODY

Black (2017) is a fantastically thrilling supernatural K-drama. Meet Joe Black meets Ghost meets The X-Files meets Goblin, Black is an epic, intricate, gripping whodunit, full of twists and turns and layer upon layer of mysteries, family secrets, conspiracies. Thrown into this mix is the fantastical element of the show’s dynamic duo: a jaded, contemptuous Grim Reaper in human form and a woman who can portentously see the shadows of death. They team up and things unravel/snowball from there.

Grim Reaper No. 444 – Black – borrows the body of the dead detective, Han Moo-Gang (Song Seung-Heon), in order to track down another reaper who has gone AWOL in another body. But Moo-Gang was involved in a secret investigation before his untimely demise, and now Black – pretending to be Moo-Gang with amnesia – finds himself pulled into continuing the investigation. And Ha-Ram – the woman who can see death – teams up with Moo-Gang (a.k.a. Black) to help, unknowing, naturally, of Black’s true, grim nature.

Bodies pile up. There’s insurance fraud. A psychopath is on the loose. A father is dead. A childhood friend is lost. Family secrets abound. Cabals of corruption cover-up continually. Child prostitution rings and a collapsed shopping mall from two decades prior factor into current crimes. And factor into Moo-Gang, Ha-Ram, and even Black’s own pasts. Twists and connections weave together into one gripping and thrilling tapestry of suspense. It’s whodunit heaven!

Ha-Ram is convinced that Moo-Gang is really her long-lost childhood friend and first love, Kim Joon. He wears a bracelet given to Joon by Ha-Ram from their youth. The “amnesiac” Moo-Gang cannot refute nor confirm her assertion. He is, after all, a reaper possessing a body, so lacks the memories of his host. Ha-Ram is joyous at having found her Joon.

But, during the course of their investigations, Black learns of Joon’s true fate, that he – as Moo-Gang – is not Joon, but Joon’s younger brother. He cannot bring himself to tell the truth to Ha-Ram, afraid of how she will react and her possible rejection.

Moo-Gang’s former fiancée, the jilted Soo-Wan – who has many secrets of her own – has no such scruples. Jealous of Moo-Gang and Ha-Ram’s increasing closeness, she takes it upon herself to tell the truth to Ha-Ram, hoping to create a schism. It works.

Ha-Ram is furious with Moo-Gang, that he kept the truth from her. That he lied to her. That he used her and this connection to get her to use her powers in his investigating. She wants nothing to do with him.

And then Ha-Ram gets into a kerfuffle with a knife-wielding psychopath and disappears. Black is beside himself, frantically searching for her, not knowing if she is dead or alive. He pulls some rather impressive feats to find her, including entering a psychopath’s dangerous lair and hanging off the side of a speeding bus. His endeavors pay off, and he rescues Ha-Ram. But, still, she rejects him.

Realizing the pain she has caused and recognizing that Moo-Gang doesn’t love her anymore, Soo-Wan decides to come clean to Ha-Ram. She explains to Ha-Ram that Moo-Gang didn’t mean to deceive, that he had just learned the truth about Joon and was about to tell her, but she, Soo-Wan, beat him to the punch. She admits to Ha-Ram that even before Moo-Gang’s accident (a.k.a. death) that left him with amnesia, their relationship was on the rocks. Soo-Wan had hoped that with the amnesia, that Moo-Gang would have forgotten their troubles, would find her again and love her. But it has not been so, despite her many emotionally manipulative attempts.

Tearfully, Soo-Wan asks Ha-Ram to take care of Moo-Gang, to not hurt him as she has done. She even goes so far as to tell Ha-Ram that Ha-Ram is the only one who can make Moo-Gang happy, pleading with her to forgive him.

Following the encounter with Soo-Wan, Ha-Ram sits outside her apartment, watching a video on her phone. The video has been sent to her by a friend and shows Moo-Gang hanging off the side of a speeding bus, yelling at the psychopath driver to tell him where Ha-Ram is. His desperation and determination are obvious. He is risking his life to save hers. She is moved to tears.

And then he’s standing there before her – dashing in black, unsure, stoic, curt and obtuse, as is his way, saying goodbye and letting her know that he will leave her alone from now on. Moo-Gang turns and walks away before Ha-Ram can respond.

Tears running down her cheeks, Ha-Ram jumps up and runs after him, catching him from behind and hugging him around his waist. 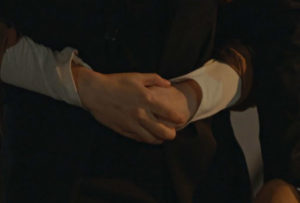 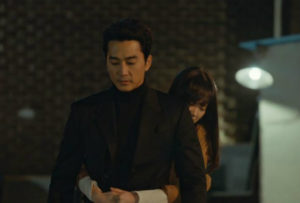 A montage begins to roll of times Moo-Gang has saved Ha-Ram, protected her, taken a beating. It’s going up for Ha-Ram that actions speak louder than words. Moo-Gang may be rude and impolite and condescending, but he is always there for her. Always.

RELATED: ROMANTIC MOMENT OF THE WEEK: GOBLIN – A BIRTHDAY WISH

Moo-Gang turns to face Ha-Ram, his body impassive, but his eyes a turmoil of emotions that his reaper nature doesn’t know what to do with. Looking into his eyes, Ha-Ram continues:

“Moo-Gang, I liked you because of who you are. The one I like is you, Moo-Gang.” And then cupping his face in her hands, Ha-Ram leans in and plants a kiss on the very surprised Moo-Gang. 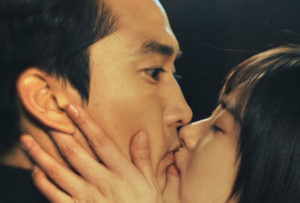 His body paralyzed, Moo-Gang’s lips do not respond. Reaper that he is, he knows nothing of kisses and human emotions. His eyes widen, his vulnerability, inexperience, confusion, and innocence apparent, but he doesn’t pull away.

It may be a very one-sided, chaste kiss (that continues into episode 15), but it is here that Ha-Ram openly chooses Moo-Gang, holds on to him. It is here that Moo-Gang begins to up his game, deciding to do anything and everything to protect and shield this woman, understanding more and more that this need he has to protect her is love. The Grim Reaper has fallen in love with a human of all contemptible things…

Our romance-themed entertainment site is on a mission to help you find the best period dramas, romance movies, TV shows, and books. Other topics include Jane Austen, Classic Hollywood, TV Couples, Fairy Tales, Romantic Living, Romanticism, and more. We’re damsels not in distress fighting for the all-new optimistic Romantic Revolution. Join us and subscribe. For more information, see our About, Old-Fashioned Romance 101, Modern Romanticism 101, and Romantic Living 101.
By Jessica Jørgensen on February 17th, 2018