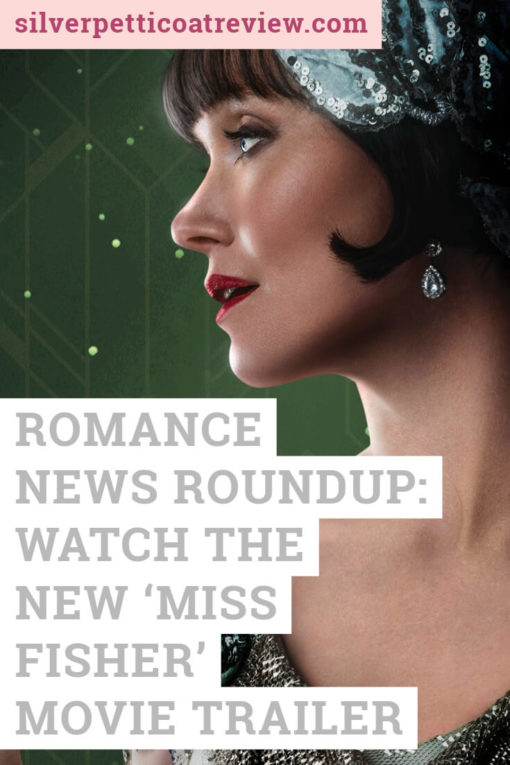 In this week’s romance news roundup, new trailers for Miss Fisher & the Crypt of Tears and Emma are here. Plus, a new Disney romantic TV series is in the works, and Megan Follows returns to the world of L.M. Montgomery.

Miss Fisher & the Crypt of Tears

Every Cloud Production released a brand-new Miss Fisher movie trailer starring Essie Davis. The movie premieres at the Palm Springs International Film Festival on January 4. Soon after, the movie releases in Australia on February 27. And for the American fans, great news! The movie premieres on Acorn TV streaming in March 2020.

The new movie begins with Miss Phryne Fisher rescuing a young Bedouin woman in Jerusalem only to join her in London later. There she pledges to help uncover the truth about the Crypt of Tears, an ancient crypt hidden in the Negev Desert. Also starring in the film are Nathan Page as Jack, Miriam Margolyes as Aunt Prudence, Ashleigh Cummings as Dot, Izabella Yena, Rupert Penry-Jones, and more.

So, check out the new Miss Fisher movie trailer below. The movie looks fantastic.

Based on the best-selling novel (and Oprah.com book of the week) by Yangsze Choo, the series takes place in the 1890s Malacca. A young woman finds herself connected to the afterlife when she becomes linked to a wealthy family’s deceased son.

You can also read our review of the book HERE as well as our 2013 interview with the author Yangsze Choo HERE.

“Mother, you must sample the tart!

You can also watch an exclusive clip over at Town & Country.

If ’80s nostalgia is more your style, the Top Gun sequel released a new trailer yesterday as well. While it looks to pay homage to the original, a new romance with Jennifer Connolly is implied. Unfortunately, Kelly McGillis (who played the love interest, Charlie in the original) is not appearing in the film.

The executive producer of Voices in the Wind, David Farquhar, said:

“I have been a huge fan of both Megan and Montgomery for years and pairing Megan’s storytelling skills along with Montgomery’s writing prowess creates the perfect mix for a delightful and entertaining family-friendly listening experience.”

If the audiobook does well, they plan to finish out the trilogy with Emily Climbs and Emily’s Quest. It will include sound effects and music and is scheduled for worldwide release late next summer as a digital download on Audible.

NEW MOVIES AND TV SHOWS IN THE WORKS

Pay attention Once Upon a Time, fans! According to Deadline, ABC has put the new romantic anthology series, Epic, in development. The show comes from Brigette Hales, a former writer from Once Upon a Time. Eddy Kitsis and Adam Horowitz (the showrunners of OUAT) will also supervise the project as executive producers.

Epic is a romantic anthology series set in the fairytale universe of Disney. Taking place in a Disney-like Enchanted Forest, it will center on a whole new set of new heroes, villains, princes, princesses and all manner of magical beings. While it will pay homage to the classic signposts we’re all familiar with from the stories we grew up with, Epic will endeavor to create a whole new batch of characters as it explores love in all its forms.

Yeah, this sounds like a winner! Here’s to hoping the series gets greenlit.

HBO Max greenlit the new rom-com reality series, 12 Dates of Christmas. The show premieres next year and is “set in a stunning winter wonderland.”

Objective Media Group EVP, Jilly Pearce said, “12 Dates of Christmas is inspired by our love of Christmas rom coms past and present. It’s a romantic, fun and feel good dating show with a difference, and has the perfect home with HBO Max.”

Mark your calendars because we’ve got a few essential premiere dates to remember.

Howard’s End, the BBC and STARZ drama, premieres on PBS on January 12. So, if you missed the romantic period drama in 2018, here’s your chance to see it!

Sanditon (the Jane Austen continuation) premieres on PBS on January 12, 2020. All eight episodes will be available on PBS Passport. It also premieres on the same day on PBS MASTERPIECE Prime Video Channel. If you don’t have access to the PBS channel or PBS Passport, you can subscribe to the Amazon channel for $5.99/month. All episodes will be available to binge on Amazon on February 23.

What romance news excites you? How much did you love the new Miss Fisher movie trailer? Leave a comment below!