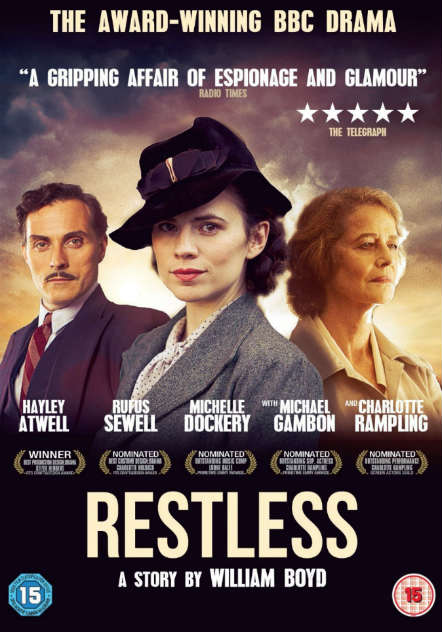 Where British productions are concerned, the normal rules of my movie-watching habits are often thrown out the door. Between their standout production qualities and the talent they pack into one film, it’s nearly a given I’ll watch BBC’s latest costume drama productions at some point. Seeing this film, Restless, came about as a spur-of-the-moment kind of thing, but was no less impressive. It begins in 1976 with a woman named Ruth Gilmartin (Michelle Dockery) visiting her mother Sally (Charlotte Rampling) at her country home. Most of her visits are normal and uneventful, but this time something is wrong. Sally is paranoid and has a story to tell.

Through letters and documents, Sally’s past as a WWII spy named Eva Delectorskaya (Hayley Atwell) unfolds. There are stories about her life pre-spy, her recruitment and training, and the love she thought she’d found with Lucas Romer (Rufus Sewell). Being swept into this story makes Ruth doubt everything she thought she knew about her mother. Sally believes she is still in danger from a man named Baron Mansfield (Michael Gambon). Besting him becomes a task Sally recruits her daughter to take on, putting not only her life in danger but potentially Ruth’s. 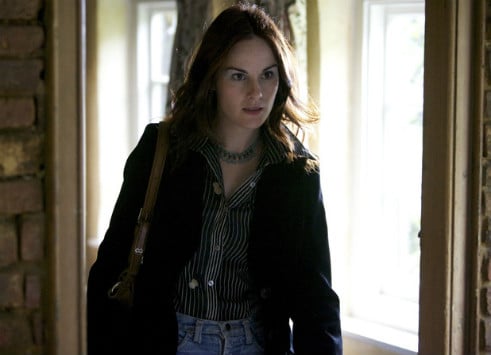 The ’70’s isn’t an era most people think of when they consider their favorite period dramas, however, the ’40s have become one of my favorite time periods to see reenacted on screen, so when you throw in both it makes for great entertainment. Plus, tempt me with promises of a spy thriller premise and there was no doubt I’d be seeing this adaptation (based off of a novel of the same name by author William Boyd). The film is a juxtaposed collection of various stories taking place, keeping things moving which in turn keeps its audience glued to the screen, biting our nails over what’s next to come. There is the mother-daughter relationship, a romance we cannot trust and the mystery surrounding the spy game its primary character plays at.

As one would expect when reading the cast line-up, everyone is absolutely brilliant in their roles. I loved seeing Hayley Atwell (Agent Carter) in something again (she owns this era in terms of how splendid she looks in the costumes) and, of course, Downton Abbey’s Michelle Dockery. Their performances are top-notch. I particularly loved Michelle and screen legend Charlotte Rampling’s scenes together. They are fraught with conflict and suspicion while still being able to focus in on some fantastic mother-daughter moments. The characters seem to be fleshed out decently with a script written by William Boyd suggesting that the 2-part miniseries does a decent job keeping the spirit of the novel intact. Though the story has more risk to it, I loved the WWII portions of the story best. It had some great mystery building until we questioned everyone’s loyalties, which proved to be a nice bit of writing. The transitions between the two eras (separated by decades) are well plotted and happen at the precise moment something important is about to go down. 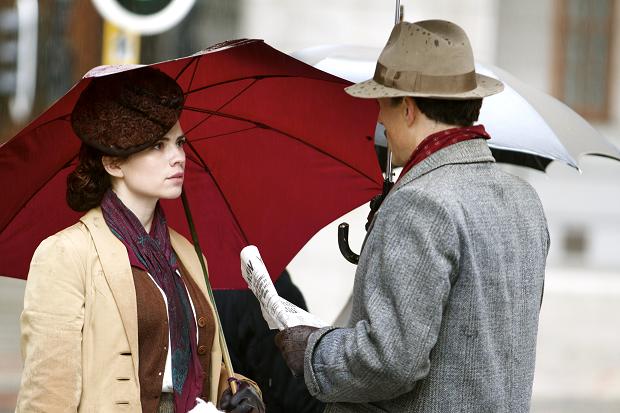 Untraditional in many ways (in comparison to most British productions I see), this was definitely an excellent way to spend a weekend. Having said that, there are a few flaws here and there. Giving Ruth a past that’s all her own (one that we understand is mistake-ridden) was a nice addition to help complete the story, which is where her backstory (in the past) should have ended. One flaw was the random addition of Ruth’s past creeping up in the present. Unless I missed something, I’m not sure what purpose this played in furthering the story. Sure it offered a moment of nervous anticipation, but beyond that, it was pointless. Then there is the climax, which itself is grand having built up steadily throughout the three-hour production, but the ending feels somehow sad. Because of this, the conclusion felt bittersweet and, therefore, may not come across as totally satisfying.

Note: There is some strong profanity (F-words) and some lesser scattered profanities as well as some instances of brief nudity and sexual content. Anyone interested in seeing this should know that as of now this film is only available as a region 2 DVD, but you can buy it as an import on Amazon.com. UPDATE: It is now available on DVD and Acorn TV.

Have you seen this adaptation or read the book? I’d be curious to hear what you thought. Also, let me know what your favorite British spy/mystery film is.

Our romance-themed entertainment site is on a mission to help you find the best period dramas, romance movies, TV shows, and books. Other topics include Jane Austen, Classic Hollywood, TV Couples, Fairy Tales, Romantic Living, Romanticism, and more. We’re damsels not in distress fighting for the all-new optimistic Romantic Revolution. Join us and subscribe. For more information, see our About, Old-Fashioned Romance 101, Modern Romanticism 101, and Romantic Living 101.
Pin this article to read later! And make sure to follow us on Pinterest.
By Rissi JC on April 10th, 2015