If allowed only one word to describe the Embrace series it would be heartbreakingly magnificent. Okay, so that’s two words, but no less true. I’m an avid reader of any genre. I haunt bookstores, online or in person, and book recommendation sites for good reads. If the synopsis captures my interest, I’ll read it. “Captures” is the key word in that sentence. The short paragraph describing a book is everything. Everything. A well-written synopsis practically guarantees I’ll read. This is why I am forever grateful to whoever wrote the synopsis for Embrace.

On her 17th birthday, everything will change for Violet Eden. The boy she loves will betray her. Her enemy will save her. She will have to decide just how much she’s willing to sacrifice.

There is more to the synopsis; however, this was enough. Four short sentences captured my interest and I embarked on a journey with Violet Eden. Originally published in Australia, the Embrace series consists of five novels. The first arrived in the United States in March of 2012. Over the next three years, Sourcebooks published two novels per year, ending with Empower. Luckily, I discovered the series in late 2013. So, I had several books to read before having to wait for the last one.

Related Post | YA Book Review: Angels at the Gate – Who Do You Love and Who Do You Trust?

The Embrace series is amazing. It starts simply enough then quickly builds and keeps building. Since finishing the last book, I have read the series multiple times over. Gorgeous prose draws you deeply into Violet’s world. Words leap off the pages, surrounding you in magic until all you see is what Violet sees. If you have not read the Embrace series, I highly recommend you run, not walk, to your nearest bookstore, favorite online book service, or your local library. Need convincing? Here are five reasons you should dive into Jessica Shirvington’s Embrace series. 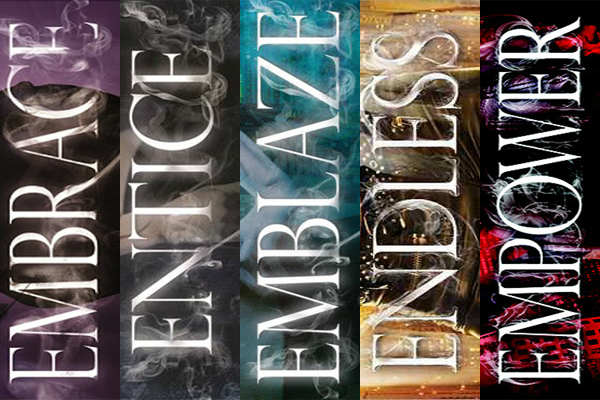 Embrace introduces us to Violet Eden. She is not your average teenage girl. She is a survivor. Mature beyond her years, Violet lives by two simple rules – no running and no quitting. These rules make her relatively quick acceptance of who and what she is understandable. However, make no mistake, while accepting, Violet still fights against her fate, clinging to what she considers “normal.” Throughout the Embrace series, Violet grows, falters, grows some more and makes mistakes as she ultimately accepts her purpose. She is self-sacrificing yet selfish in all ways that make us human. Violet makes decisions, not for the greater good, but to protect those around her. Despite the heavy burden on Violet’s shoulders, she manages to remain a typical teenager. Shirvington balances “typical” teen behavior with a strange maturity not often found in 17-year-old girls. This maturity only grows as Violet’s fate becomes clear.

Violet is Grigori – a human with angel essence. She is a warrior, born to battle fallen angels known as exiles. There are both exiles of light or dark and their presence on earth is rarely for the greater good. Shirvington’s exploration of angel lore is meticulous. While the concept is not wholly original, its use in the Embrace series is as unique as the characters. Some of the explanation is simplistic, but that doesn’t take away from the overall narrative. It’s actually necessary. The explanation of the mythology fits with how Violet processes her new identity. As a result, we become Violet as we learn about her new world. She asks the questions we are asking ourselves and thus, we receive the answers. Shirvington is neither patronizing nor so academic as to lose us. Instead, she strikes a reasonable balance.

Violet isn’t the only character worth gushing about. In fact, every character is well-written and serves a purpose. Lincoln and Phoenix are two other primary characters that evolve over the course of the series. Lincoln is Violet’s Grigori partner and Phoenix is an exile of the dark. They are instrumental in Violet’s development insofar as she allows. Despite the books being about Violet, Lincoln and Phoenix do not stagnate. Through Violet’s eyes, we see how these men change as she challenges their “norms.” Shirvington is not afraid for her characters to be vulnerable or to show that vulnerability.

“Love is all the small moments. It is what fills the quiet.” – Steph, Empower

Shirvington also gives us a plethora of self-aware secondary characters. They are confident, brimming with compassion and knowledge. Such as Griffin, the leader of the local Grigori. Or Steph, Violet’s best friend, who is wise beyond her years in a way Violet is not. There are also characters who redeem themselves as the series progresses. Despite the number of characters, none are superfluous. Even better, none are one dimensional. The most minor characters have a role and Shirvington takes the time to give those characters depth.

Let me take a breath here because whew! Angst doesn’t even begin to cover it. Agony, maybe. Heartbreak, definitely. There is a love triangle that is unearthly (ha ha…sorry, couldn’t resist!) and teeming with emotional turmoil. While it is only part of the Embrace series, it does echo throughout. Shirvington easily could have made Phoenix the ultimate “bad guy.” Instead, she created this beautifully flawed character. Phoenix fought his very nature for Violet. That hint of vulnerability stays with him. Thus, while you are hating him, you can’t help but root for him. But, only a little because, in my opinion, nothing compares to Lincoln.

“You are the thing I dread the most in myself, Violet, because…..I love you so much that I can’t trust myself. I’d die for you, give up all my power for you. I’d give you my soul in an instant, even if it meant I had to spend eternity in torment – just for one moment with you as mine.” – Lincoln, Emblaze

In creating Lincoln, Shirvington broke the mold. He is everything that is good in the world for Violet. Destined to be her Grigori partner, he’s the constant in her life until he is not. While Violet pushes him away, Lincoln does not give up but recognizes her need for space. It’s true he has a maturity beyond Violet but, when it comes to her, it is unknown territory. He falters and makes any number of mistakes. Yet, it’s clear from the beginning that Violet and Lincoln belong together. Their souls call to each other. Their feelings for each other weave through every chapter of every book. There are obstacles, the biggest being their role as Grigori. However, when surrounded by each other, these obstacles never seem to matter.

Jessica Shirvington tells a remarkable story. Better yet, she tells an incredible story of love and betrayal, forgiveness, and what it means to fully accept the person you are deep within. Shirvington also touches on themes of faith. After all, it is a story of angels, good versus evil, and the ultimate power of love.

“It’s a leap. A commitment. You can’t undo this once it’s done, Violet.”
– Griffin, Embrace

Every book in the Embrace series connects to the other seamlessly. Shirvington’s words pull you in and you become invested in Violet’s fate before you finish the first book. You need to know what happens next. While each book is its own story, the Embrace series is a larger story. Through it all, Violet’s emotional journey paves the way. The stakes rise in each story, culminating in the ultimate battle in Empower.

If these five reasons aren’t enough to get you to pick up the Embrace series, then check out the reviews from Publishers Weekly and Kirkus. Take a chance, I promise the books won’t disappoint!

This is difficult to recommend. I love these books and the stories they tell. In the right hands, these books would make unbelievable movies with stunning visuals. But, it has to be the right person with the right vision. I think turning these books into movies is a risk because audiences are fickle when it comes to young adult romances. I do think combining the books to make a trilogy rather than five separate films would serve the story well.

Content Warning: There are mature themes throughout the series including sexual intimacy. There is a trauma in Violet’s past that involves a sexual assault. However, the books are not explicit or graphic.

Our romance-themed entertainment site is on a mission to help you find the best period dramas, romance movies, TV shows, and books. Other topics include Jane Austen, Classic Hollywood, TV Couples, Fairy Tales, Romantic Living, Romanticism, and more. We’re damsels not in distress fighting for the all-new optimistic Romantic Revolution. Join us and subscribe. For more information, see our About, Old-Fashioned Romance 101, Modern Romanticism 101, and Romantic Living 101.
Pin this article to read later! And make sure to follow us on Pinterest.
By Catherine on August 16th, 2017