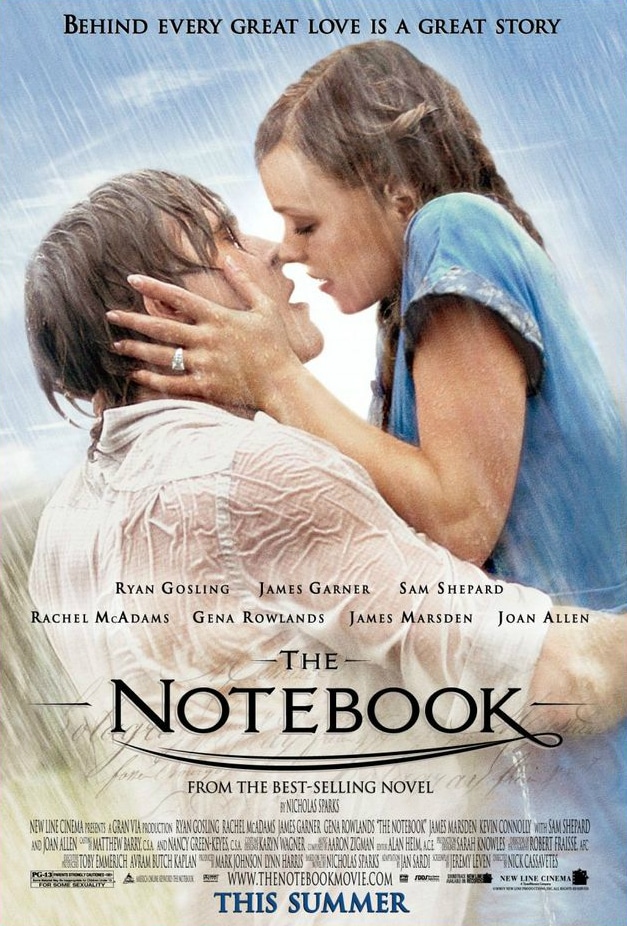 It’s hard to believe The Notebook premiered exactly ten years ago today on June 25, 2004. And while the magic of the first viewing can never be re-experienced, somehow the film has never lost its charm. With its powerful story of star-crossed romance that survives all odds across the decades, it’s no surprise this romantic drama starring Ryan Gosling and Rachel McAdams (with their charged, electric synergy on screen) has stood the test of time.

So, in celebration of what has become one of the most epically romantic films of all time, I thought for this week’s Top List it would be fun to take a look at ALL of the Nicholas Sparks movie adaptations (the books would be different I’m sure) and rank the romances. I think you can guess which takes the #1 spot. Warning…there are spoilers below.

This romantic drama/war film wasn’t a great movie, but it was still romantic and entertaining; not to mention the chemistry between Channing Tatum and Amanda Seyfried was memorable. But the romance can be hard to swallow sometimes considering the fact that she dumped him and then married someone else. And after all that, he still did everything for her. By the end I just didn’t feel like she deserved him.

7. The Last Song: Ronnie Miller and Will Blakelee

It’s hard to deny that Liam Hemsworth and Miley Cyrus have chemistry, but the acting in the film was a little on the cheesy side. Still, young love is always entertaining to watch and this romantic coming of age story was good old-fashioned fun with some tragedy a la Nicholas Sparks thrown in.

6. The Lucky One: Logan and Beth

I was hesitant when I heard Zac Efron was going to be the romantic lead in a Nicholas Sparks adaptation, but after only a few minutes into the film he won me over. The story of a Marine who finds hope from a picture he discovers of a woman in the midst of war (with whom he later finds and falls in love with) is both romantic and touching. However, there were times when Beth annoyed me, like when she found out the truth about the picture and temporarily broke it off before hearing the full story. It is like, “Hey, you found the perfect guy. You’re really going to end it because he has a photo of you that gave him hope during war?” Uh, no. Still, it had a great ending, if not a slightly cheesy, predictable one.

This movie was a total surprise for me in a good way. I honestly thought it was going to be horrible, and while it didn’t receive great reviews, I personally really enjoyed the film and the budding romance between Katie and Alex. Plus, it didn’t hurt that they cast the entertaining (and always fabulous at playing dark, tortured characters) David Lyons as the abusive ex. I also loved the supernatural twist.

I have a soft spot for lonely, damaged characters, so of course I loved this film (even though it had its flaws). Diane Lane and Richard Gere have undeniable chemistry and brought believable performances to the roles of these two unlikely lovers. With themes at times reminiscent of Charlotte Bronte’s tragic novel Villette, I couldn’t help but be completely sold by the love story of Paul and Adrienne.

3. Message in a Bottle: Garret Blake and Theresa Osborne

Some might argue that this film is boring or slow, but I don’t find it boring at all. In fact, I found quite the opposite. I love the romantic notion of finding a love letter in a bottle which brings two strangers together and this movie pulled it off nicely. There’s something old-fashioned about this story that sucked me in. Plus, I’ve always liked Kevin Costner and Robin Wright, so together it was an automatic win.

2. A Walk to Remember: Landon Carter and Jamie Sullivan

Yes, it’s true, Mandy Moore isn’t quite yet an actress in this film and you can tell, but everything else made up for it. Besides, she wasn’t bad and her chemistry with Shane West was palpable. This story has an innocence and a lightness that all of the other films don’t have that I actually really liked. This tragic coming of age romance has scene after scene of memorable romantic moments. From the kiss during the play that somehow became real, the gazing at the stars together or even the night when Landon helped Jamie cross off the items on her bucket list. This is a story of redemption, true love and pure, soul love. It’s definitely a romance to remember.

1. The Notebook: Noah and Allie

And then there was one. Instead of telling you why I think Noah and Allie have the best romance from all of the Nicholas Sparks adaptations, I’ll just share what has become one of the most famous movie scenes in recent pop culture history. I think it speaks for itself.

How would you rank the Nicholas Sparks movie romances? Let me know in the comments!

Check out our other Top Lists! We put up a new list every Wednesday.

Top 50 Classic Romances in Film that Will Make You Swoon

Top 20 Silver Screen Kisses That Will Knock Your Socks Off

Our romance-themed entertainment site is on a mission to help you find the best period dramas, romance movies, TV shows, and books. Other topics include Jane Austen, Classic Hollywood, TV Couples, Fairy Tales, Romantic Living, Romanticism, and more. We’re damsels not in distress fighting for the all-new optimistic Romantic Revolution. Join us and subscribe. For more information, see our About, Old-Fashioned Romance 101, Modern Romanticism 101, and Romantic Living 101.
Pin this article to read later! And make sure to follow us on Pinterest.
By Amber Topping on June 25th, 2014