Quo Vadis, a biblical epic, compresses the end of the reign of Emperor Nero into a few weeks and does so in spectacular fashion. From thousands of detailed costumes, an amazing set design, to memorable performances, this award-winning movie ushered in Hollywood’s age of biblical epics released throughout the 1950s and 1960s. And while not comparable to The Ten Commandments or Ben-Hur, Quo Vadis definitely stands out as a worthy predecessor to both.

The story follows Roman Commander Marcus Vinicius (Robert Taylor) returning home to Rome after years of war abroad. Soon after, he meets Lygia (Deborah Kerr), a Polish princess turned refugee hostage that he falls in love with. Lygia, a converted Christian, lives with her Roman family as an adopted daughter. They too are Christians.

Set in 64 A.D., Christianity is still a new religion, followers secretly listening to Peter and Paul, both of whom play supporting roles in the film. Lygia has faith in her beliefs and even though she falls in love with Marcus (despite his earlier attempts to enslave her), she cannot turn her back on her beliefs. This causes tension between the two because he doesn’t believe in her God.

Meanwhile, Nero, the Roman Emperor contemplates a crazy idea to begin a new age of Nero (he’s a lunatic basically). He also writes songs about all of his murderous and insane ideas. (Peter Ustinov is brilliant as Nero in all of his foolish tirades.)

And as Quo Vadis is historical fiction (much like Titanic), the love story serves as the backdrop leading into horrifying historical events like the Great Fire of Rome and the persecution of the Christians. For the most part, this works rather seamlessly as we are given windows into both worlds: the Christians and the Romans.

On one side, we glimpse the spectacle that is Rome. There are lavish parties and a complete disregard for the people. There are concubines, slaves, and side comments about murder. At the same time, the poet Petronius (Marcus’ Uncle), philosophically contemplates the future of the Roman Empire as he sucks up to Nero who is obsessed with him.

However, there’s a touch of humanity in Petronius that makes him a compelling character. One can even almost understand why one of his slaves falls in love with him. Furthermore, the performances by Leo Genn in this role and Peter Ustinov as Nero were both rightly nominated for Academy Awards. Their scenes together leading up to both of their ends are superb. For me, their scenes and Shakespearean like monologues are the true highlights of the movie.

On the other side are the Christians. Here is where I wanted more. I wanted more flashbacks into Peter’s time with Christ. And, I wanted more with Paul who felt too much in the background. While I believed Deborah Kerr as a devout Christian, the possible conversion of Robert Taylor’s interpretation of Marcus felt rushed. I just feel like there needed more emotion in this entire story. I needed to ‘feel’ more. 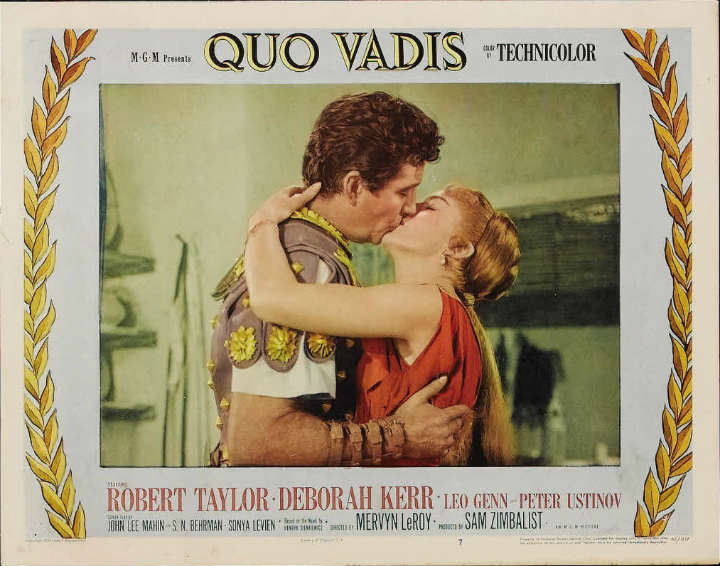 As a whole, I liked the romance between Lygia and Marcus. However, if ever there was another new adaptation of the novel (I haven’t seen the Polish film to compare), I feel like there could be so much more depth. Did Marcus fall for Lygia because she was beautiful? Because he wanted something he shouldn’t have wanted? Or he did he love her because their souls connected? I believe it’s the latter (due in part to Lygia’s reaction whenever he was around) but the execution and development were a little on the weak side.

Moreover, I really didn’t like Marcus turning Lygia into an implied sex slave. Even though he lets her go free, it still feels gross. Thankfully, this all changes when Marcus turns against Nero to save the woman he loves from the fire. He becomes much more heroic. The transformation just needed a smidge more to make the romance as epic as the rest of the film.

In the meantime, there’s another strange romance brewing between Eunice (Petronius’ Spanish slave girl) and Petronius himself. I had no idea why the poor girl was so in love with him. Stockholm Syndrome? But, by the end, I kind of understood because of his magnetism and intelligence. Still, the poor women in this film were slaves making it difficult to completely root for the romances.

Overall, Quo Vadis is an epic film nominated for 8 Academy Awards for a reason. The cinematography, the exquisite costumes, the fabulous production design, the gorgeous musical score, and the excellent performances from an all-star cast all make this 3-hour movie an experience to remember. Transport yourself to Ancient Rome and enjoy the show!

Content Note: While unrated, I would give Quo Vadis a PG-13 rating for adult themes, suicide, disturbing deaths (i.e. being eaten by lions), and for an uncomfortable scene of animal cruelty when a bull’s neck is broken. As there were no CGI back then, all the animals in this film are real. Seeing the animals be used for the film is disturbing for any animal lovers.

Where to Watch: At the time of article publication, you can buy Quo Vadis on DVD/Blu-ray or rent digitally from Youtube, Vudu, Google Play, and iTunes. Quo Vadis also occasionally airs on TCM.

Our romance-themed entertainment site is on a mission to help you find the best period dramas, romance movies, TV shows, and books. Other topics include Jane Austen, Classic Hollywood, TV Couples, Fairy Tales, Romantic Living, Romanticism, and more. We’re damsels not in distress fighting for the all-new optimistic Romantic Revolution. Join us and subscribe. For more information, see our About, Old-Fashioned Romance 101, Modern Romanticism 101, and Romantic Living 101.
Pin this article to read later! And make sure to follow us on Pinterest.
By Autumn Topping on March 4th, 2019