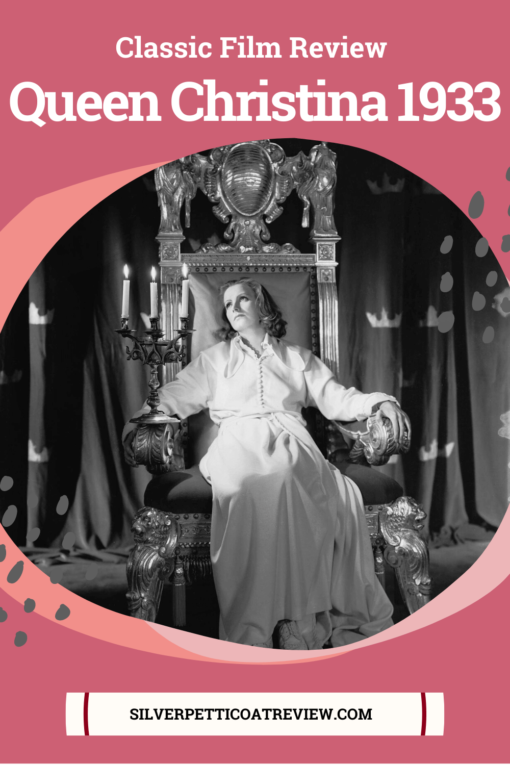 Greta Garbo stars in the 1933 classic film about Queen Christina of Sweden.

Queen Christina, a pre-Code classic, stars the iconic Greta Garbo in one of her finest roles. With a blend of fact and fiction, the Swedish Garbo portrays the life of the 17th century Queen of Sweden with humor, raw emotion, and authenticity. This 1933 period film about Queen Christina draws you in because Garbo’s performance is commanding. Each expression and eye movement leaves you spellbound by Garbo’s charming and regal performance as the famous Swedish Queen.

“I’m tired of being a symbol, Chancellor. I long to be a human being; this longing I cannot suppress.”

After her father’s untimely death at the Battle of Lützen, Christina takes the throne at six years old. But Queen Christina doesn’t grow up to be like most female royals because she was raised like a boy. She’s dominant, well learned, and masculine, even claiming she will “die a bachelor.”

Indeed, this pre-code film also mildly alludes to the speculated relationship with Christina’s lady-in-waiting Ebba Sparre (There’s a chaste kiss and dialogue about freeing Ebba from her “domination” after she learns of Ebba’s engagement.)

While eccentric (she often dresses in male clothing), Christina remains popular in Sweden until she meets Don Antonio (played by Greta Garbo’s once real-life love John Gilbert), a Spanish envoy for the King of Spain.

Now, this romance is not true to history. However, the fictional love story works effortlessly to symbolically explain why Christina goes on to abdicate the throne. (In reality, there are several reasons including her conversion to Catholicism).

In Queen Christina, Don Antonio meets the Queen in an unconventional and rather humorous manner. After going riding to escape court, she gets caught in the snow and stops at an inn. Dressed as a man and in complete disguise, Christina is free to join in lively conversations, including with the handsome Antonio. Here, she relishes in the unexpected freedom. But what happens when she reveals her real identity?

Both snowbound at the inn, they must share a room because there’s only one left. At first, Antonio has no idea he’s talking to a woman and the Queen at that! But when it’s time to undress for bed, he shockingly realizes Christina is not a man.

And as this is pre-code, the two become lovers and share a bed (in a fade to black way). Still, he doesn’t know she’s the Queen. Christina and Don Antonio fall in love, but their fantasy world must come to an end eventually. She to her throne and he to his mission to ask her hand in marriage for Spain’s King. While still vague, Christina promises to meet up with him in Stockholm as the two go separate ways.

“I thought you would understand when you saw me again what had happened. That it had been so enchanting to be a woman, not a Queen, just a woman in a man’s arms.”

Back on her throne, Antonio enters the court, sees Christina’s sly smile (because Garbo is marvelously expressive), and realizes he’s fallen for the Queen. Soon, the two continue their courtship despite pushback from her advisors. Instead of a foreign envoy, they wish for her to marry her popular Swedish cousin. But Christina always does her own thing and knows her own mind.

Unfortunately, their romance stirs anger and mob behavior in her people. This quick escalation changes everything for the Queen, and she must choose between a real-life or a royal life as a symbolic icon where she could never be true to herself. How can one choose between love and duty?

“One must live for one’s self. After all, Chancellor, one’s own life, is all one has.”

Queen Christina is all about the brilliance of Greta Garbo. She’s extraordinary, and her chemistry with John Gilbert is remarkable. There’s a realness and closeness that shines onscreen.

But the film itself is also a spectacle to behold. The costumes are exquisitely detailed, the stunts (including horse riders) outstanding, the direction by Rouben Mamoulian close to perfect, and the dialogue sharp, witty, and mesmerizing. This classic period drama is a must-see for those who love royal period dramas and appreciate classic cinema.

It’s also worth watching alone to witness the legendary Greta Garbo as Queen Christina remove her crown. The scene is mesmerizing. You also won’t want to miss the breathtaking closing shot of the period classic.

Content Note: Not rated but nothing explicit and no strong language. There is mild violence in a duel.

Where to Watch: Rent/buy on Digital and DVD.

4 thoughts on “Queen Christina (1933): A Breathtaking Period Classic You Need to See”