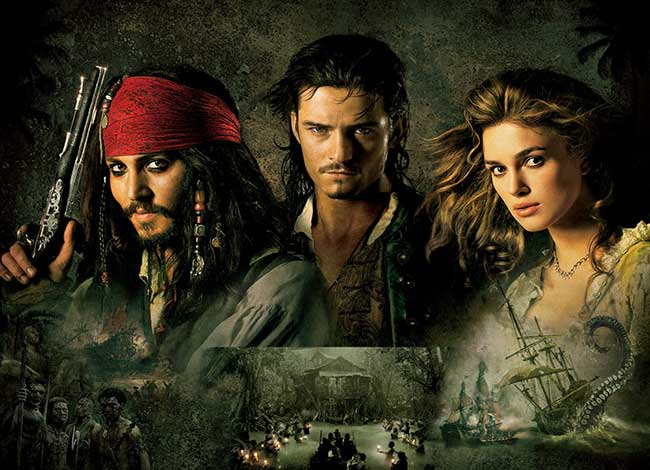 The Pirates of the Caribbean Trilogy Review

Adventure, romance and fantasy all collide in Pirates of the Caribbean to take audiences on a swashbuckling ride through the adventures of Captain Jack Sparrow, Will Turner, and Elizabeth Swann. The Pirates of the Caribbean series has been arguably one of the biggest movie sensations in history. The series is continuing to produce successful films even after the end of its main story arch and the trilogy about Will Turner and Elizabeth Swann. Some would say that as long as Johnny Depp agrees to keep starring in the films, they will continue to captivate audiences.

The Pirates of the Caribbean series begins normally enough with the beautiful Elizabeth Swann pining after the low-born Will Turner, while her father tries to convince her to marry the more suitable Lieutenant James Norrington. One can sense that adventure is on the way when Captain Jack Sparrow enters the picture, swaying his way into Port Royal to steal a ship.

Things really get interesting, though, when Captain Barbossa and his crew show up that night to abduct Elizabeth, thinking she’s the key to freeing themselves from their curse.

Will convinces Jack to help him rescue Elizabeth, and the two set off with Jack drunkenly swaggering across the screen in the way that only he can, in a stolen ship to haul together a ragtag crew of misfit pirates, and go after Captain Barbossa. We later discover that Jack used to be the captain of the Black Pearl until Barbossa staged a mutiny and marooned him on an island with a pistol left with only one shot. With a grave intensity in his heavily smoky-makeup-covered eyes, Jack tells Will that he’s been saving that one shot for Barbossa.

After a failed attempt to lift their curse with Elizabeth’s blood, Barbosa realizes it is actually Will, the son of Bootstrap Bill, that they need. He then proceeds to maroon Elizabeth and Jack on an island with the same pistol he left Jack with the last time he left him on a deserted island. After a night of drunken revelry, during which Jack makes a pass at Elizabeth in his smarmy way, Elizabeth manages to build a pyre that draws the attention of Norrington’s ship. Despite Jack’s insistence that they should have saved the rum for drinking, the pair is rescued, much to Jack’s regret. Elizabeth convinces Norrington to help her and Jack save Will by promising she will marry him in return. What follows is a daring escapade filled with sword fighting, passionate kisses, and daring flirtations with death. The next two films in the series take us on more adventures with the trio and follow the epic love story between Will and Elizabeth.

When discussing the Pirates of the Caribbean movies it is impossible not to draw attention to Johnny Depp’s unique and unforgettable portrayal of Captain Jack Sparrow. Depp really captured the hearts of fans around the world with this off-kilter, roguish character. Depp did intensive research of 18th-century pirates before his performance and came up with a character that I don’t think anyone was expecting. He compared them to modern rock stars, deciding to base his portrayal of the character off of Keith Richards. At first, this confused the Disney executives. They couldn’t figure out whether the swaggering, eye-liner wearing scallywag was drunk or gay. Michael Eisner even accused Depp of “ruining” the film while they were shooting (Read more Here).

Depp’s decision to portray Captain Jack as a staggering, often confused, half-drunk, and even somewhat dandyish man proved to be a smash hit. Audiences ate up his performance, falling in love with the half-mad captain. Depp really steals the show, and he created an iconic character that will live on in history. His character is what gives the series the ability to continue even without Elizabeth and Will. People love Captain Jack, and he has literally become a movie legend.

The love story between Will and Elizabeth is also wonderfully portrayed. Keira Knightly is brilliant as Elizabeth. Her growth throughout the movies is fascinating to watch. I loved seeing the once prim and perfect miss become a daring, outspoken woman. I also think the tension added to the plot with using Captain Jack as a possible love interest in competition with Will really brought out a whole other element to Knightly’s character. She changed from being the “good girl” to flirting with danger and the temptation of being a treasure-loving pirate. I thought her chemistry with Depp was incredible, and to this day I still can’t decide who I really want her to end up with.

These films will go down in history, drawing people in for decades to come, like the Star Wars franchise. You can’t help but love them, and want to go on the breathtaking adventures they draw you into. Pirates of the Caribbean made buried treasure and pirates popular again and continues to do so. I, for one, am waiting eagerly for the next installment in the story. I’m still captivated by Captain Jack and want to see what crazy thing he’ll do next.

Are you a Pirates of the Caribbean lover? Who did you want Elizabeth to end up with? Sound off in the comments below…

Our romance-themed entertainment site is on a mission to help you find the best period dramas, romance movies, TV shows, and books. Other topics include Jane Austen, Classic Hollywood, TV Couples, Fairy Tales, Romantic Living, Romanticism, and more. We’re damsels not in distress fighting for the all-new optimistic Romantic Revolution. Join us and subscribe. For more information, see our About, Old-Fashioned Romance 101, Modern Romanticism 101, and Romantic Living 101.
Pin this article to read later! And make sure to follow us on Pinterest.
By Rebecca Lane on November 9th, 2015