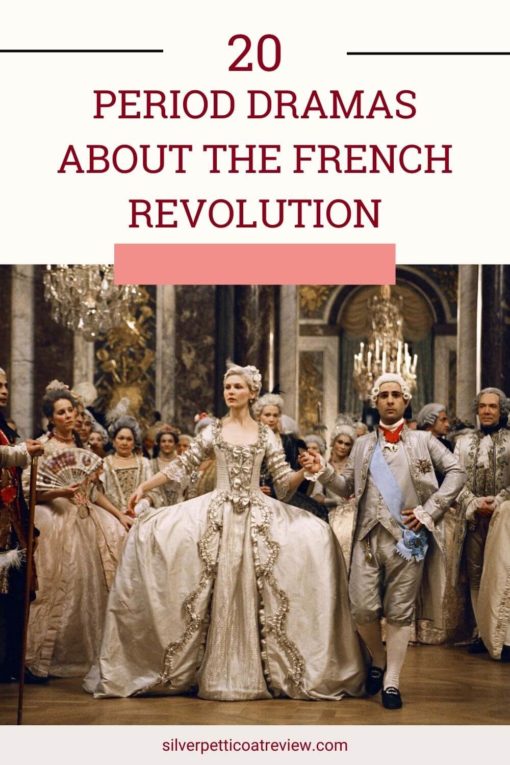 Bastille Day, otherwise known as French National Day, celebrates the anniversary of the storming of the Bastille on July 14, 1789. This bloody event ushered in the French Revolution. A Revolution that turned France into political turmoil.

The Royal monarchy was overthrown and the infamous guillotine came into play. Then, the dictator Napoleon took over. With such an interesting history, how could filmmakers and storytellers not turn to the past to tell such rich stories?

And as a site that loves period dramas, particularly romantic period dramas, what better than to share films full of swashbuckling adventure, romance, and tragedy on Bastille Day?

Note: The “Where to Watch” sections have been updated for July 2022.

20 Period Dramas About the French Revolution

The controversial true story of Jeanne De La Motte Valois stars Academy Award-winner Hilary Swank (Million Dollar Baby), as a countess whose name and title were stripped from her by the Royal Family, leaving her penniless in the late 18th Century. Her fight to restore her name and proper place in society is filled with mystery, intrigue and desire, with an infamous diamond necklace at the center of it all.

This touching and dramatic story was nominated for an Academy Award for Costume Design, and also stars Jonathan Pryce (Brazil, Ronin), Academy Award-winner Christopher Walken (Catch Me If You Can, Pulp Fiction), Joely Richardson (The Patriot, Return to Me) and Adrien Brody (Liberty Heights, The Jacket).

Where To Watch: Currently, you can stream on Kanopy or rent/buy on Digital or DVD.

Content Note: Rated R for sexuality but it is not overly explicit.

In post-revolution France, a hot-air balloon lands in Wales with a young boy in tow. Soon the locals discover the mysterious visitor is none other than Louis XVII (Richard O’Sullivan), son of Louis XVI and Marie Antoinette. An American named Virginia Traill (Belinda Lee) attempts to shelter him, but word has been sent to the French revolutionaries and young Louis’ life is in danger. His only hope is Philippe de Beauvais (Louis Jourdan), a loyalist who wants to restore Louis to the throne.

Where To Watch: You can occasionally find this one on Youtube and TCM to watch. However, it is available on DVD (very few copies and in Non-USA format).

Gérard Depardieu and Wojciech Pszoniak star in Andrzej Wajda s powerful, intimate depiction of the ideological clash between the earthy, man-of-the-people Georges Danton and icy Jacobin extremist Maximilien Robespierre, both key figures of the French Revolution. By drawing parallels to Polish solidarity, a movement that was being quashed by the government as the film went into production, Wajda drags history into the present. Meticulous and fiery, Danton has been hailed as one of the greatest films ever made about the Terror.

Where To Watch: Currently you can buy on DVD or stream on The Criterion Channel.

Horatio Hornblower goes to France with his British troops to help fight the French Revolution. Instead, he ends up protecting a young schoolteacher from rape.

Where To Watch: Currently, you can buy it on DVD (I recommend buying the entire and brilliant Horatio Hornblower Collection) or stream on The Roku Channel.

Chronicles the time that Thomas Jefferson spent as the American Ambassador to France (1784-1789). These were significant years for him in his public and personal life, and fateful ones for France, where the revolution was about to break out.

Where To Watch: Buy this James Ivory period drama on DVD, stream it on Hoopla, or rent/buy the movie digitally.

THE LADY AND THE DUKE is a suspenseful, visually opulent story based on a true story about an unusual friendship during a dangerous time. From highly acclaimed master director Eric Rohmer (Tales of Four Seasons), starring exceptional talents Lucy Russell (Following) and Jean-Claude Dreyfus (Delicatessen, The City of Lost Children). Beautiful aristocrat Grace Elliott enjoys her comfortable upper-middle class life and warm friendship with her former lover, the Duke of Orleans, until the turbulent French Revolution of the 1790s frighteningly begins.

Their friendship unravels as Grace risks her life taking in a fugitive against the Duke’s wishes. Soon, Grace urges the Duke not to make a horrifying decision. But, ultimately, she’s unable to prevent several bloody fates, including the possibility of her own.

Where To Watch: Buy on DVD. Occasionally, you may also find it on Youtube.

True story of the legendary courtesan who was mistress to France’s King Louis XV.

Where To Watch: Buy Madame Du Barry on DVD. It also airs sometimes on TCM, so check your listings!

Lavish biography of the French queen who “let them eat cake.”

Where To Watch: Check TCM for possible airings. You can also buy it on DVD or rent it digitally.

Content Note: Not Rated but likely G or PG.

Written and directed by Academy Award® winner Sofia Coppola (2003, Best Writing, Lost In Translation), Marie Antoinette is an electrifying yet intimate retelling of the turbulent life of history’s favorite villainess. Kirsten Dunst portrays the ill-fated child princess who married France’s young and indifferent King Louis XVI (Jason Schwartzman). Feeling isolated in a royal court rife with scandal and intrigue, Marie Antoinette defied both royalty and commoners by living like a rock star, which served only to seal her fate.

Where To Watch: Available on Hulu and Pluto TV. You can also buy on DVD or rent/buy digitally.

Any private eye knows a lot about other people’s secrets. L.A. private eye Mick St. John (Alex O’Laughlin) has a secret of his own. He’s a vampire, dwelling in a covert netherworld complicated by friendship with an undead finance honcho (Jason Dohring of Veronica Mars); memories of his alluring ex-wife (Shannyn Sossamon), who turned him into a vampire; and a relationship with a human (Sophia Myles) he feels drawn to protect — and maybe to love. But no matter how tempting, Mick knows a vampire-human romance is eternally dangerous.

Where To Watch: You can buy Moonlight on DVD or Digital (Vudu and Apple TV).

Epic story about the romance between the most powerful man in the world and the woman who conquered his heart.

During the French Revolution, a young woman is saved from the guillotine by an insurrectionist (Asther). Also called The Prisoner of Corbal.

Where To Watch: Rent/buy on Digital and DVD. Occasionally, you can catch it on Youtube.

In the late 18th century, the French republic has been thrown into social and political chaos, a disarray that is exploited by the evil Maximilian Robespierre (Richard Basehart). Within 48 hours, Robespierre will seize power and [perpetuate] his diabolical tactics on France’s helpless citizens. Charles (Robert Cummings), a freedom-fighter working for the resistance, poses as the murderous prosecutor that Robespierre has sent for, skillfully sidestepping the secret police and informants with the guidance of Madelon (Arlene Dahl), a former lover who’s now a key resistance member.

When Robespierre tells Charles that his black book, a notorious death list filled with enemies on both sides, is missing, Charles is commanded to find it before its contents can be exposed, putting an end to his planned dictatorship. Charles’ quest to maintain Robespierre’s trust while secretly trying to destroy him and his wrathful allies elicit a series of suspenseful exploits where danger looms around every Parisian corner.

Where To Watch: Check your TCM listings under the title The Black Book. You can also currently stream it on Tubi and Flix Fling, or rent/buy on Digital and DVD.

By day, Andre secretly perfects his parries and lunges…and hides his true identity at night behind the mask of stage clown Scaramouche.

Where To Watch: Scaramouche sometimes airs on TCM, so check the calendar. You can also rent/buy it on Digital and DVD.

Sir Percy Blakeney (Leslie Howard) is an English aristocrat leading a double life, by day he’s an effete aristocrat and by night he’s the Scarlet Pimpernel, rescuing French nobles from the clutches of the French revolution under Robespierre’s Reign of Terror.

Where To Watch: You can stream the classic film on HBO Max, The Criterion Channel, and Flix Fling. You can also rent/buy on Digital and DVD.

This Emmy-nominated adaptation of the classic swashbuckling tale stars Jane Seymour (Dr. Quinn: Medicine Woman) and Anthony Andrews (Brideshead Revisited). While enemies of the new French Republic are carried to off to the guillotine, more than a few of France’s hated aristocrats have escaped execution thanks to the actions of a dashing young Englishman known as the Scarlet Pimpernel.

Where To Watch: Buy on DVD or stream on Acorn TV (also through an Amazon Acorn Subscription). Moreover, this title is available to rent/buy digitally.

Content Note: Not Rated but feels PG or a moderate PG-13.

During the turmoil of the French Revolution, English aristocrat Percy Blakeney, often aided by his League of friends, secretly undertakes various daring missions as the Scarlet Pimpernel.

Content Note: While Not Rated, it would likely be TV-14.

Charles Dickens’ classic story is brought to the screen in this Oscar-nominated production. Set during the French Revolution, two men find themselves in love with the same woman.

Where To Watch: You can rent/buy on Digital or DVD.

Content Note: While Not Rated, it would likely be PG.

Two men, one an aristocrat and one a drunken lawyer, fall in love with the same woman during the early stages of the French Revolution.

Where To Watch: Currently, you can stream it on Britbox or buy it on DVD.

Marie Antoinette Queen of France is a French language motion picture historical drama directed by Jean Delannoy who co-wrote [the] screenplay with Pierre Erlanger and Bernard Zimmer. Michele Morgan stars as the Austrian princess who becomes the last Queen of France in waning years of the 18th century. Jacques Morel costars as King Louis XVI, Antoinette’s slow-witted, ineffectual husband, while Richard Todd is the dashing European ambassador who briefly brings romance into the heroine’s life.

What are your favorite period dramas about The French Revolution? Sound off below…