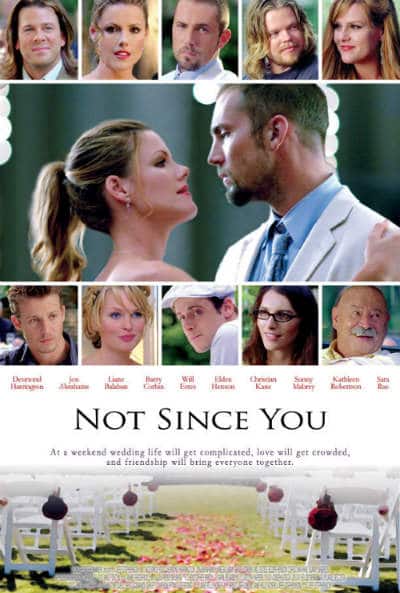 Not Since You Film Review

Not Since You is a 2009 Romantic Drama about a close group of college friends who graduated from NYU and parted ways soon after 9/11 in 2001. Jump ahead a few years later when they all reunite for a wedding in Georgia. Soon, romantic entanglements and old conflicts rise to the service, leaving everyone to take a closer look at their past, present, and future. This lesser known indie drama is full of heart, good performances, and an appealing story perfect for viewers looking to pass a pleasant hour and a half.

Not Since You is an ensemble, character-driven drama with recognizable, charismatic actors the audience should enjoy. Desmond Harrington takes the lead in the film as Sam Nelson, a man who has been traveling for years and hasn’t stayed in the loop of all his friends’ happenings. He returns unaware that his ex-girlfriend Amy (Kathleen Robertson) married a teacher named Ryan (Christian Kane). Of course, unresolved feelings and conflicts soon unfolds between the two ex-lovers. I have seen Harrington before but never realized how much he makes for quite the dreamy leading man. Maybe it’s his eyes and brooding charm? It’s a role that suits him and I’d like to see this actor in more romantic parts.

Elsewhere, Howard (Jon Abrahams), Victoria (Sunny Mabrey), and Billy (Will Estes) are stuck in a love triangle of sorts with lots of bad blood between the now ex best friends. Howard blames Billy for stealing Victoria away and has been in a permanent bad mood for years. He lets anyone and everyone know how horrible Billy is for stealing his girl. Will Estes is as charming as ever in the role and makes you root for him despite his imperfections.

And then there is Joey (Elden Henson), the alcoholic screw-up who is still emotionally traumatized by 9/11, and Sarah (Sara Rue), the optimistic and kind-hearted writer who is still a virgin. The two reconnect and begin to develop a romance with each other. Sara is a breath of fresh air as the bubbly, likable writer working in New York with no male prospects. (Honestly, I would watch a whole film about her character trying to make it in New York City.) It’s always nice to see female characters not presented as “weird” for still being a virgin long past the average age.

Elden, on the other hand, gives a lovely performance as the tortured alcoholic with self-esteem issues. I really felt for the guy and felt he had the most believable character arc of the film. Their romance was sweet and boosted the overall romantic feel of the film.

Not Since You makes for a pleasant, enjoyable viewing – especially for anyone nostalgic about their college years.

On top of the likable cast, the story is entertaining even if formulaic and predictable. I also really enjoyed the soundtrack throughout the film. I feel it added just the right amount of emotion to each scene.

However, while I enjoyed the film and reminisced about my own college days, certainly this film is not for everyone. It’s a quiet story with characters who aren’t always likable. And technically, not a whole lot happens. So if you’re expecting action sequences or sweeping romantic moments, look elsewhere. What this film does do, however, is explore past friendships, romantic relationships as well as new beginnings in a heartfelt way.

Sure, a few times the dialogue felt cliché and a few of the characters could have had a little deeper characterization. But, as a whole, this is a very agreeable film with an enjoyable story and a talented cast. There were some humorous scenes (the shooting scene was a real standout) as well as some emotional ones that kept me engaged. The film also ties together the whole story in a way I found rather fitting at the end.

Overall, while a flawed film, Not Since You makes for a pleasant, enjoyable viewing – especially for anyone nostalgic about their college years.

You can stream Not Since You on Amazon Prime.

Have you seen Not Since You? What are your thoughts on this film? Let me know in the comments!

(Though I would give a 4 to the Sarah and Joey romance.)

Our romance-themed entertainment site is on a mission to help you find the best period dramas, romance movies, TV shows, and books. Other topics include Jane Austen, Classic Hollywood, TV Couples, Fairy Tales, Romantic Living, Romanticism, and more. We’re damsels not in distress fighting for the all-new optimistic Romantic Revolution. Join us and subscribe. For more information, see our About, Old-Fashioned Romance 101, Modern Romanticism 101, and Romantic Living 101.
Pin this article to read later! And make sure to follow us on Pinterest.
By Amber Topping on November 8th, 2016