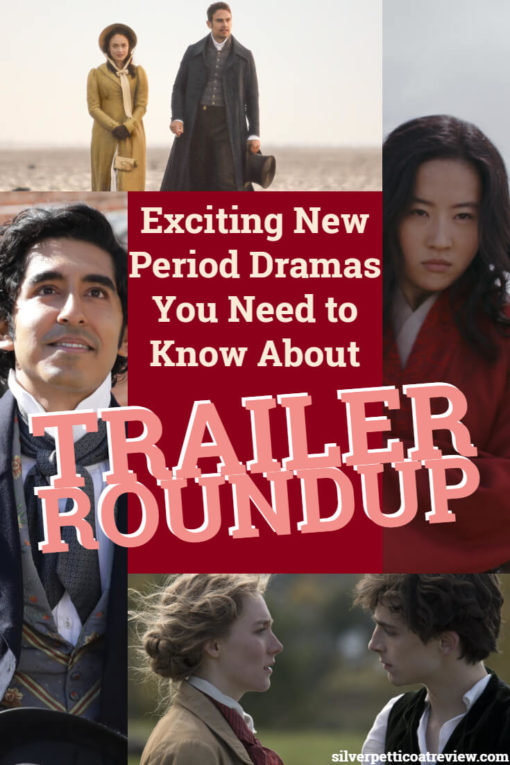 From movies to television, these are some of the best new period dramas (with trailers available right now) coming soon.

The Aeronauts. Belgravia. Little Women. Mulan. The Secret Garden. New period dramas are in abundance right now. So, we’ve rounded up the best available trailers for upcoming new period dramas for you to watch all in one place. Below, check out the trailers of the exciting period dramas coming soon you won’t want to miss.

What You Need to Know: Award-winning filmmaker Terrence Malick directs this new historical drama telling the story of a conscientious objector refusing to fight for the Nazis. The movie releases in theaters on December 13, 2019.

What You Need to Know: Felicity Jones and Eddie Redmayne star in this period adventure film written by Jack Thorne (Harry Potter and the Cursed Child). A pilot and a scientist fight for survival as they attempt to further scientific discoveries in a hot air balloon. This one looks like it has all the trappings of a satisfying period drama.

The film releases in select theaters on December 6 and then becomes available to everyone on Amazon Prime Video on December 20, 2019.

Anne with an E, Season 3

What You Need to Know: The controversial Anne of Green Gables adaptation returns to Netflix on January 3, 2020. The series becomes much more enjoyable if you can appreciate it as a decent period drama full of Romanticism and contemporary issues. Just don’t go in expecting an accurate adaptation of the books or a realistic portrayal of the time. For season 3, the show will have its first Indigenous storyline.

What You Need to Know: Beecham House is a traditional new period drama about the people living in a Delhi mansion during the late 18th century. The series already aired in Britain on ITV and has received mixed reviews. However, reviewers in favor of the series, argue it’s a fun, enjoyable watch. Plus, Gurinder Chadha (Bride and Prejudice) writes the series, and one of the stars is Lesley Nichol of Downton Abbey fame. It sounds like a fantastic combination!

PBS Masterpiece will air the series soon, and will likely premiere in March 2020. Unfortunately, ITV has already canceled the series. So, season one will probably be the only season the show will ever get.

What You Need to Know: Based on a book by Julian Fellowes (Downton Abbey), this series will premiere sometime next year on EPIX. Julian Fellowes wrote the script about two wealthy families when secrets surrounding a ball from decades earlier begin to unravel. The series looks promising.

Rating: Not rated yet.

What You Need to Know: Julian Fellowes is back with another period drama. This one tells the story of a young Louise Brooks (famous actress and dancer) who is only allowed to study dance in New York City if she has a chaperone. Elizabeth McGovern (Downton Abbey) plays the conservative chaperone.

While The Chaperone already premiered as a limited release in theaters earlier this year (and it’s available to rent now), the movie premieres for the first time on Masterpiece on PBS, November 24, 2019.

Rating: NR in the United States but PG elsewhere.

What You Need to Know: The popular Netflix series returns with a new cast. Olivia Colman takes over the role of Queen Elizabeth II with Tobias Menzies, Helena Bonham Carter, and Josh O’Connor also taking over main characters. Season 3 premieres on November 17, 2019.

Rating: TV-MA, but most episodes typically feel closer to TV-14.

The Personal History of David Copperfield

What You Need to Know: This is a comedic adaptation of Charles Dickens’ famous novel. With an all-star cast including Hugh Laurie, Dev Patel, Anna Maxwell Martin, and more, this is sure to be a fun film. The movie releases in the UK on January 24, 2020. Fox Searchlight Pictures haven’t announced a US release date yet.

What You Need to Know: This new coming of age period TV series looks to bring a modernized, imaginative portrayal of Emily Dickinson to the small screen. But it seems entertaining and worth watching – if lack of realism doesn’t bother you. The series stars Hailee Steinfeld and premieres on Apple TV + on November 1, 2019.

What You Need to Know: Niki Caro (Whale Rider, The Zookeeper’s Wife) directs the live-action version of Disney’s Mulan. Based on the trailer, this looks to be one of the better Disney remakes. Plus, the film has a fantastic female director behind it. The release date is March 27, 2020.

Rating: Not rated yet. Will likely be PG or PG-13 depending on how graphic the battle scenes are.

What You Need to Know: Robert Downey Jr. stars in this big-budget adaptation of The Voyages of Doctor Dolittle. The film takes place in Victorian times and looks like a fun film for the entire family. The movie releases on January 17, 2020.

Rating: Not rated yet but will probably be PG.

What You Need to Know: Ronald D. Moore (Battlestar Galactica, Outlander) has a new female-driven series premiering soon. This upcoming sci-fi series depicts an alternate history of the 1960s. The show asks the question: what if the USSR had gotten to the moon first? So, it’s still “period,” but with a fantasy, sci-fi twist and stars Joel Kinnaman, Wrenn Schmidt, and Sarah Jones. For All Mankind premieres on Apple TV + on November 1, 2019.

What You Need to Know: Harriet is a biographical movie about Harriet Tubman escaping from slavery. Cynthia Erivo (Mr. Selfridge, Genius) stars with Kasi Lemmons (Black Nativity) directing. Thankfully, you won’t have to wait for long to see this one. The movie releases next week on November 1, 2019.

What You Need to Know: Bad Wolf Productions (A Discovery of Witches) is back with another high-budget adaptation. This British series, based on the famous novels by Phillip Pullman, tells the story of two children and their adventures in a parallel Victorian world. There, humans have companions called daemons. The series stars Ruth Wilson and James McAvoy and premieres on HBO November 4, 2019.

What You Need to Know: The new trailer reveals a fun Disney movie set in Edwardian times that looks like a mix between Pirates of the Caribbean and Miss Fisher. Emily Blunt and Dwayne Johnson star. The film will release on July 24, 2020.

Lady and the Tramp

What You Need to Know: Another Disney live-action remake of a classic. However, this time, it won’t premiere in theaters. The period family movie will be included with Disney+, the new streaming service, and will be available on November 12, 2019. Tessa Thompson and Justin Theroux star.

What You Need to Know: Based on the fifth book of Diana Gabaldon’s popular book series, the show focuses on the forthcoming American Revolution in North Carolina. The series will return to STARZ on February 16, 2020.

Rating: TV-MA for explicit sexuality and violence with moderate profanity.

What You Need to Know: Andrew Davies (Pride and Prejudice, Sense and Sensibility) returns to adapting Jane Austen with Sanditon, a TV continuation of Austen’s unfinished novel. While the series has already aired in Britain, the new luscious-looking romantic period drama will premiere on Masterpiece on PBS January 12, 2020.

Rating: Not rated yet but is expected to be TV-14 for a controversial sex scene and some mild nudity.

What You Need to Know: Colin Firth stars in this new magical-looking adaptation of The Secret Garden with a script from Jack Thorne. While the film will premiere in the UK on April 17, 2020, STX Entertainment has not announced a US release date yet.

Rating: While not rated yet, it will likely be PG.

What You Need to Know: Set during the Cold War in 1950s England, period drama favorites Keeley Hawes and Toby Stephens star. Summer of Rockets already aired in the UK. And it’s unclear if or when this will air in the US. However, if you don’t want to wait, you can buy it on DVD on Amazon (though it’s Region 2).

The War of the Worlds

What You Need to Know: Eleanor Tomlinson (Poldark) and Rafe Spall star in this new adaptation of H.G. Wells’ novel. The miniseries has already aired in Canada and is set to air later this year in the UK. Unfortunately, no date has been announced for a US release yet. Hopefully, an announcement will come soon!

The Warrior Queen of Jhansi

What You Need to Know: The Warrior Queen of Jhansi is a new period drama film set during the 1857 Indian Rebellion. A queen leads an army to fight against the British East India Company. Based on a true story, this movie looks epic and inspiring. The biopic will release in theaters on November 15, 2019.

Rating: Rated R for some violence.

What You Need to Know: This 7-part British miniseries follows the lives of ordinary people during World War II. World on Fire stars Sean Bean, Helen Hunt, and newcomers Jonah Hauer-King (Little Women) and Julia Brown. The series currently airs on the BBC. Masterpiece on PBS hasn’t announced when World on Fire will premiere yet in the US, but they should soon.

The King (R; Historical Drama premieres on Netflix on November 1, 2019)

Portrait of a Lady on Fire (R; Period Romance releases on December 6, 2019)

Year of the Rabbit (NR; Period Comedy has no US release date yet)

A Beautiful Day in the Neighborhood (PG-13; Biographical drama takes places in the 1990s and will release on November 22, 2019)

The Mandalorian (NR; The new Star Wars spinoff series set a long time ago in a galaxy far away premieres on November 12, 2019!)

Star Wars: The Rise of Skywalker (PG-13; The end to the latest Star Wars trilogy releases on December 20, 2019. While not a period drama, it’s still a costume drama.)

What new period dramas are you looking forward to watching? Let me know in the comments!

1 thought on “Exciting New Period Dramas You Need to Know About: Trailer Roundup”