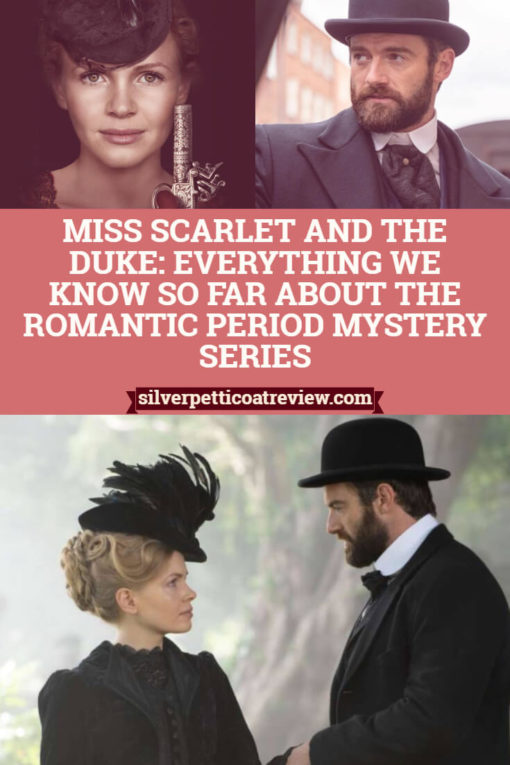 Watch the trailer for the new romantic mystery series, Miss Scarlet and the Duke starring The Crown‘s Kate Phillips.

Fans of Miss Fisher’s Murder Mysteries take note: a new romantic period drama mystery series is coming soon, and it looks epic. The Victorian detective show includes a smoldering will they/won’t they romance, appealing mysteries, and a dash of witty feminism. And thankfully, you won’t have to wait too long to see it. A+E International just announced that Miss Scarlet and the Duke, the new six-part Irish series, will premiere on Masterpiece on PBS in Fall 2020.

Patrick Vien, Group Managing Director of A+E International, said, “We are absolutely thrilled with the global momentum for this new series, built on a strong line-up of top tier international broadcasters and kicking off under the auspices of the world-renowned, multi-award-winning Masterpiece franchise.”

With this exciting new announcement, here’s everything we know about the gripping new period drama so far.

Miss Scarlet and the Duke Synopsis

A+E Networks International and Element 8 Entertainment co-produced Miss Scarlet and the Duke with Grantchester writer Rachael New as Executive Producer and Creator. Irish director and Co-Executive Producer, Declan O’Dwyer (Merlin, Atlantis), was at the helm directing all six episodes. Produced in Ireland, the majority of the series fittingly filmed on location in Dublin.

According to Deadline, Miss Scarlet and the Duke tells an intriguing story of London’s first female private detective in Britain.

When Eliza’s father dies, he leaves her penniless in a time where marriage is her only option for financial security. But the headstrong Eliza is determined to find another way.

Luckily, she has an ace up her bonnet – her father’s business – a private detective agency. Eliza knows all the tricks of the trade but as a genteel 19th century lady she’s never been allowed to put them into practice.

To operate in this man’s world, she needs a partner. Step forward Detective Inspector William Wellington of Scotland Yard, played by Stuart Martin (Medici), who is also known as “The Duke;” drinker, gambler and womaniser.

Eliza and The Duke strike up a mismatched, fiery relationship that will crackle and smoulder with sexual tension as they team up to solve crime in the murkiest depths of 1880’s London.

Miss Scarlet and the Duke stars Kate Phillips of The Crown, Peaky Blinders, and most recently, Downton Abbey (Princess Mary) as the heroine, Eliza Scarlet.

When and Where to Watch

Besides PBS’s Masterpiece, the series aired on Alibi in the UK and will air on Seven Network in Australia, CBC in Canada, and Lightbox in New Zealand.

The series premiered on March 31, 2020, and will premiere in the United States in January 2021 during PBS Masterpiece’s 50th-anniversary kickoff. (Update: The series is now airing on PBS and is available to watch on PBS Passport.)

Miss Scarlet and the Duke Trailer

Trailer Reaction: Jack and Phryne have some competition!

If that trailer’s not enough to get you excited, we don’t know what is! Eliza looks perfect in the role, shining as an independent and intelligent private detective.

Stuart Martin, on the other hand, broods with intensity as the moody Scotland Yard Detective, the Duke (even his nickname intrigues). Then there’s their undeniable sizzling chemistry.

Not only do Eliza and the Duke look to give Miss Fisher and Jack a run for their money as best period crime-fighting onscreen duo.

But fans of Mick and Beth, Scully and Mulder, or even Margaret Hale and Mr. Thornton should be pleased. Their romance looks to be an intellectual meeting of the minds – our favorite kind of TV love story.

Overall, with high production quality, top-notch talent (cast and crew), and an exciting premise, this looks to be one of the best romantic mystery series ever. Let’s hope the series lives up to the trailer because this is now our most anticipated romantic series of 2020.

What are your thoughts on Miss Scarlet and the Duke? Are you as excited as us to watch the new series next year? Let us know in the comments.

5 thoughts on “Miss Scarlet and the Duke: Everything We Know So Far”