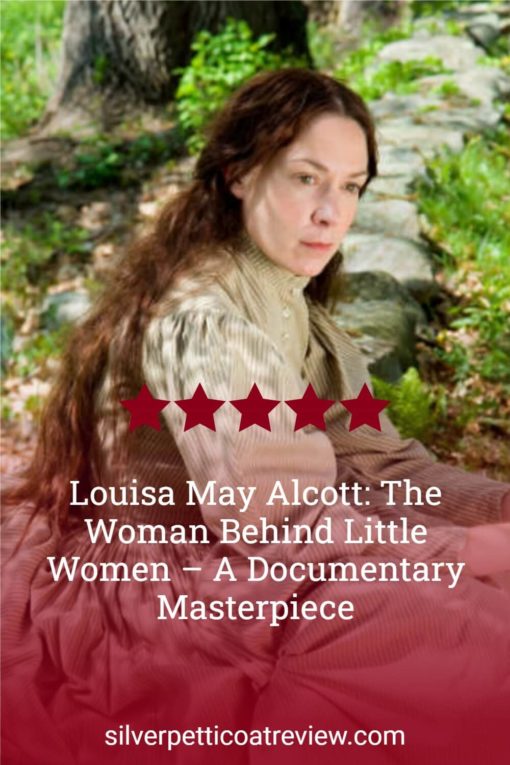 Louisa May Alcott: The Woman Behind Little Women Review

If you ever found yourself wondering what Louisa May Alcott was like, then look no further. The 2009 documentary Louisa May Alcott: The Woman Behind Little Women takes an in-depth look at Louisa’s life using only primary sources.

The film follows Louisa May Alcott’s life from her birth to her death in such a compelling, truthful way that by the end you feel like you know Louisa. AKA, the real-life Jo March.

Besides the fantastic script, the actors cast to reenact scenes from Louisa’s life fit into their roles perfectly.

Elizabeth Marvel is the obvious standout as Louisa. She captures Louisa’s energy and passion, bringing the woman to life before our very eyes.

The documentary also opens the curtain to the poverty, hardship, depression, and anxiety, Louisa, herself experienced. If you thought the March family had it hard, it was nothing compared to what the Alcott family suffered.

Even more intriguing was the relationships Louisa had with famous writers and thinkers of the time such as Ralph Waldo Emerson and Henry David Thoreau. Emerson was a literary mentor while Thoreau taught her and her sisters to appreciate nature. No doubt these men had an incredible influence on Louisa’s own writing as she grew.

Particularly interesting is the “romance” Louisa arguably had with Ladislas Wisniewski (“Laddie”), a young Polish man Louisa traipsed through Paris with when she was 33. Using primary sources, the filmmakers and scholars make a convincing argument as to why there likely was some type of romance between them.

Not to mention, that Louisa, at least partially, used Laddie as an influence for the character of Laurie in Little Women.

And I’m only scratching the surface of the trove of information available in this fascinating documentary. Besides the very reliable sources used to create the narrative, the film itself is artistic in style and plays out like a very entertaining period drama.

It makes you wonder why no one has actually ever made a dramatic film about Louisa May Alcott – a truly fascinating and talented woman.

In all, I can’t recommend this film enough. Anyone who loves Little Women, Louisa May Alcott, the history of literature or even the Concord Transcendentalist movement, should enjoy this brilliant documentary.

Where to Watch: You can buy Louisa May Alcott: The Woman Behind Little Women on DVD or rent/buy on Digital.

2 thoughts on “Louisa May Alcott: The Woman Behind Little Women – A Documentary Masterpiece”