It seems Little Women adaptations are all the rage right now! So, you just knew there was going to be a contemporary one. Well, I went into this adaptation expecting very little. One, this was an indie film with a seemingly lower budget. Not to mention, the new writer/director Clare Niederpruem was behind it with very little experience. If I’m also being honest, I expected one of the lesser quality faith-based films with bad acting and writing. But instead, I was pleasantly surprised. This is a faithful adaptation of Louisa May Alcott’s book – even if it’s in the modern day. And Niederpruem proves she’s an up and coming filmmaker to watch out for. 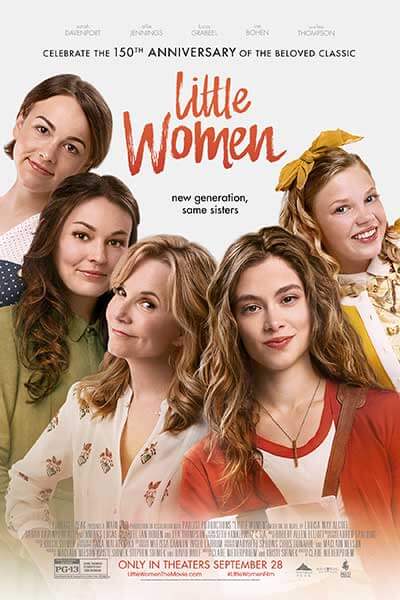 In this modern retelling of the beloved novel, the story follows the lives of the March sisters: Meg, Jo, Beth, and Amy! In this version, Jo is an aspiring YA author who loves to write genre fiction! But no one’s taking her novel seriously. Especially not Professor Bhaer who agrees to help edit and improve her book. Though he clearly has an ulterior motive for helping her! What follows are flashbacks which lead to the present day as the March sisters grow from children to women. Their bond unites them despite any and all hardships they face – including the ultimate tragedy.

What surprised me most about this adaptation was just how faithful it was to the original classic book by Alcott. And how seamlessly it was adapted to fit contemporary times – proving just how timeless this story is and will continue to be.

The cast of actors was quite good with Lea Thompson leading the March family as Marmee. The script was decent with believable and heartfelt dialogue.  And all the right plot points and beats are there. The bond between sisters. The struggle to be moral in a contemporary world. The best friendship between Jo and Laurie. Even the father who’s away at war.

However, this is not a perfect film. The jump cuts between the present and the past was a little bit confusing at times. The editing also could be cleaner. There were a few times Sarah Davenport interpreted Jo as a little too agitated – though she mostly did a good job. There were also some strange inconsistencies. Like why was Jo at a college when she didn’t go to college pitching her book to professors instead of literary agents or publishing houses?

But what the film does have a lot in spades is heart. Plus, I have to give Niederpruem props for making Professor Bhaer more attractive than he typically is to me. Yep, I’m #TeamLaurie. Maybe it’s because I’m a writer and I relate too much to Jo in some ways but the thought of a man telling you what and how to write just grates on my last nerve. As if realistic fiction is superior to fantasy! It’s such a snobbish view that never warms me to Bhaer. Not even in this adaptation because Jo ONLY relies on Bhaer, one man’s opinion, when it comes to her fantasy novel. That said, Ian Bohen as “Freddie” is just a little bit swoon-worthy!

Overall, if you love Little Women and can appreciate a contemporary adaptation that’s akin to a decent Hallmark drama, then you’ll likely appreciate this little-known movie.

Content Note: PG-13 for teen drinking and thematic elements. Should be fine for the whole family.

Where to Watch: You can rent/buy the film on Digital (IE: Amazon). You can also now buy on DVD.

What are your thoughts on this adaptation of Little Women? Did you enjoy it? Or were you left disappointed? Let me know in the comments!

Our romance-themed entertainment site is on a mission to help you find the best period dramas, romance movies, TV shows, and books. Other topics include Jane Austen, Classic Hollywood, TV Couples, Fairy Tales, Romantic Living, Romanticism, and more. We’re damsels not in distress fighting for the all-new optimistic Romantic Revolution. Join us and subscribe. For more information, see our About, Old-Fashioned Romance 101, Modern Romanticism 101, and Romantic Living 101.
Pin this article to read later! And make sure to follow us on Pinterest.
By Amber Topping on January 23rd, 2019