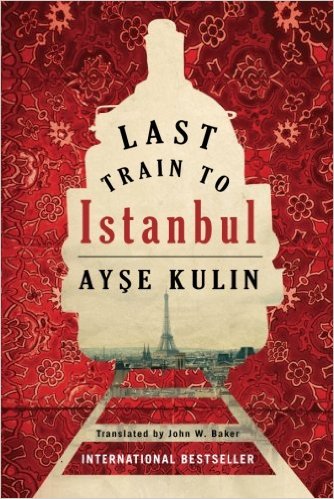 Recently, I’ve been reading numerous books set during World War II. This particular book, Last Train to Istanbul, is one such book. Written by Ayse Kulin and translated into English by John W. Baker, it’s an international bestseller and I can see why. The story is partially based on the stories told to the author by Turkish diplomats. This means that the research is also solid, something I appreciate in my fiction.

When a Turkish Muslim girl, Selva, falls in love with a Turkish Jew, both of their families disown them. They move to France, leaving their families in a type of mourning. Selva’s sister, Sabiha, struggles with her life in Turkey and the guilt she feels about her sister leaving. Her husband Macit, a government official, is growing more distant as the threat of war hangs over Turkey. Will Sabiha and Macit ever reconnect?

Meanwhile, in France, Selva and Rafo Alfandari have built a new life for themselves. When the Nazis invade, however, they find themselves in danger. A diplomat friend of Sabiha and Macit reaches out to Selva and Rafo to help them get their passports ready, in case they need to flee France.

Realizing the situation in France is worse than they thought and that there are many Turkish citizens who happen to be Jewish trying to get out of France, members of the Turkish Consult begin to plot a way to save their citizens. At first, Selva and Rafo are reluctant to go back. However, they eventually agree. Gathering the Turkish Jews, the diplomats load up a train that takes their people to Turkey through Europe. It’s the last train to Istanbul. Will the train make it safely with everyone on board? Can the bonds of family conquer prejudice and fear?

While the characters aren’t always likable, they are very human. The struggles that they go through, the pain that they feel, these are struggles that we can all relate to on some level. They feel jealousy, loneliness, anger, passion, depression, and envy. This gives the book a real quality, as does the great amount of description. Last Train to Istanbul is less romantic, but it shows both the power of family and what a committed group of people can actually do. The story uses flashbacks splendidly, showing a complex family dynamic that adds to the whole story.

I do have one slight nitpick and a content warning, however. First, if you can read Turkish, this might be better in the original language. It’s beautifully written and translated, but I feel like something was lost in that translation. Not because it’s a bad translation, but because it’s a translation. Secondly, the content is fairly mild, but it’s about WWII and the Jewish oppression, so there is some bad language, violence against women, and perilous situations present in the novel.

This is one of those books that makes me want to research and find out more. Personally, I always forget about Turkey when reading about WWII, and Last Train to Istanbul shows me that that might be a mistake. If you like historical fiction, World War II, political intrigue, or stories about families, this might be a book you should check out. It’s a solid book, and I can see why it’s so popular.

This could be a beautiful movie. With the setting and the complex characters, as well as the story about a brave group of diplomats smuggling Jews out of France through Germany, this is a book begging to be adapted. Maybe directed by Ron Howard? And of course, Ayse Kulin should be involved in bringing her novel to life.

You can buy the book at Amazon.

Have you read The Train to Istanbul? What are your thoughts on this historical fiction novel? Let me know in the comments.

Our romance-themed entertainment site is on a mission to help you find the best period dramas, romance movies, TV shows, and books. Other topics include Jane Austen, Classic Hollywood, TV Couples, Fairy Tales, Romantic Living, Romanticism, and more. We’re damsels not in distress fighting for the all-new optimistic Romantic Revolution. Join us and subscribe. For more information, see our About, Old-Fashioned Romance 101, Modern Romanticism 101, and Romantic Living 101.
Pin this article to read later! And make sure to follow us on Pinterest.
By Bailey Cavender on October 29th, 2016

1 thought on “Last Train to Istanbul: A Wonderful Turkish Novel”