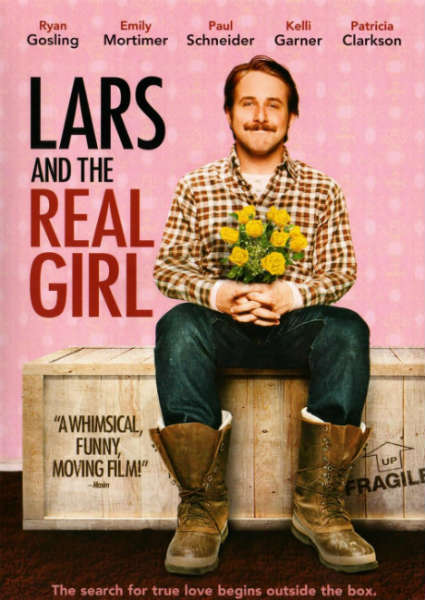 Lars and the Real Girl (2007) is one of those strange films you don’t expect to like, but actually do! What could have been a perverse idea is in reality one of those touching films that stays with you long after seeing it.

Lars and the Real Girl tells the story of the sweet but shy and awkward Lars (Ryan Gosling), who has buried some real, emotional pain that comes out in a very strange way. He brings home his new “girlfriend,” (much to the excitement of his brother Gus and sister-in-law Karin) only to discover that she is, in fact, a sex doll Lars ordered from the Internet. Lars truly believes the doll, who he calls Bianca, is a real person. He has conversations with her and has created a whole backstory of who she is and how they met. Ironically, he makes Bianca religious with a humanitarian background. Lars, in fact, isn’t looking for a sexual relationship with “Bianca,” but a deep one. Bianca becomes his way to deal with his inability to touch others because he experiences intense pain when real people touch him.

Of course, Gus (Paul Schneider) and Karin (Emily Mortimer) are extremely worried about him, thinking something is seriously wrong. Karin goes along with it from the start, however, worried for Lars but also compassionate. Gus, on the other hand, thinks his brother is completely crazy. He brings Gus to the local psychiatrist (Patricia Clarkson) who convinces Karin and Gus to go along with Lars’s delusion. She believes that the delusion will end when Lars is ready.

From there, the whole small northern town goes along with the ruse. The small Christian community decides to be supportive of Lars who is loved by everyone. And while there are a few judgmental stares, for the most part, the townspeople go above and beyond for Lars in a heartwarming way. Lars and the Real Girl is about community and supporting each other no matter the challenges they face. This film may leave you wanting to be a better, more compassionate person without feeling like you’ve been preached at.

Lars and the Real Girl also has a love story building in the background. The more Lars recovers, the more he realizes he’s actually romantically interested in his kind co-worker Margo (Kelli Garner). There are some very sweet moments between the two, especially when he discovers that he doesn’t feel pain when he touches her. You will easily find yourself rooting for these two lonely characters to be together.

The screenplay of Lars and the Real Girl, from talented writer Nancy Oliver, was deservedly nominated for best original screenplay at the Academy Awards. While it didn’t win, the nomination gives you a good idea of just how great this very “original” script is.

Somewhere between a comedy and a drama, you’ll find yourself both laughing and crying – if you’re the crying type –  from start to finish.  If you love unique stories with memorable performances, a small town feel and a little bit of romance, definitely give Lars and the Real Girl a chance. You can rent to stream on Amazon or buy on DVD!

You can rent Lars and the Real Girl on Amazon or Buy it on DVD!

Our romance-themed entertainment site is on a mission to help you find the best period dramas, romance movies, TV shows, and books. Other topics include Jane Austen, Classic Hollywood, TV Couples, Fairy Tales, Romantic Living, Romanticism, and more. We’re damsels not in distress fighting for the all-new optimistic Romantic Revolution. Join us and subscribe. For more information, see our About, Old-Fashioned Romance 101, Modern Romanticism 101, and Romantic Living 101.
Pin this article to read later! And make sure to follow us on Pinterest.
By Amber Topping on October 26th, 2015