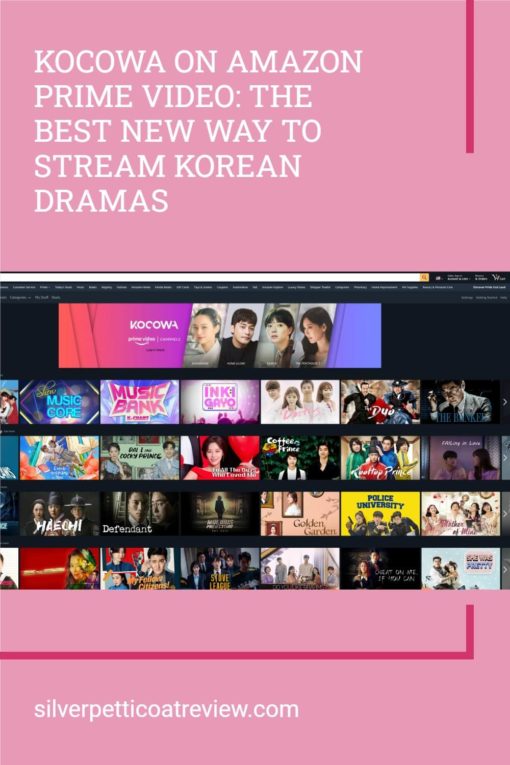 Breaking news, Kdrama fans! If you’re still missing the ease-of-use DramaFever provided and currently rely on Viki or even Netflix for your romantic Korean Drama fix, there is now a new option for fans in the United States. As of June 16, 2022, Kocowa (a Korean video streaming app) is now available on Amazon Prime Video to stream several favorites – with new content added daily!

While the love of everything Korean was more niche in past years, the recent rise in the fascination of Korean culture due to Oscar-winners like Parasite or the massive Netflix hit Squid Game, Apple TV’s Pachinko, or even the colossal popularity of K-Pop in the United States with groups like BTS.

So, it’s no surprise Amazon Prime Video is finally getting the most out of its growing popularity.

So, what is Kocowa? The Kocowa TV streaming app was first launched in November 2016 and has grown in popularity. But it hasn’t been more of a niche service. However, partnering with Amazon could change that.

In other words, expect the most popular Korean dramas from the biggest Korean networks to be on Kocowa with English subtitles.

According to the press release on Business Wire, wA CEO KunHee Park had much to say about the new reach Kocowa will have for Korean Drama fans in the United States:

“Korean content has become so much more mainstream recently, and we are excited to offer Korea’s fresh storytelling with our diverse programming package on such an influential, global streaming service like Prime Video through Prime Video Channels… As a niche streaming service with broad reach, KOCOWA is well-positioned to be competitive in the battle among streaming services by super-serving fans of Korean-produced content. It will now be even easier for viewers to watch new shows coming out of Korea at home, fully subtitled in English. I am happy that viewers will be able to discover us and enjoy Korea’s world-renown brand of entertainment.”

RELATED: The Best Alternatives to Dramafever: Where to Watch Asian Dramas Now?

The international streaming service includes a variety of original programs: K-dramas, K-reality, K-variety, and even K-pop!

Another exciting addition of Kocowa on Prime is that customers can watch certain shows on the same day they air in Korea!

The Amazon Channel organized everything well. You can quickly find the Top 10 current series or your favorite genres – from romantic comedy to thrillers.

The original Kocowa streaming app has a live stream. Although it’s unclear if a live stream will also be available on Prime Video.

We should assume that Amazon will add more content (since the press release mentions thousands of titles becoming available) to the library as they build up the Amazon Channel in the coming weeks and months.

HOW MUCH DOES KOCOWA ON AMAZON PRIME VIDEO COST? IS KOCOWA FREE?

The new Amazon Channel, Kocowa, provides a 7-day free trial. After that, it costs $6.99 per month for a subscription.

If you love Korean Dramas or are even considering dipping your toe into it, Kocowa has the “largest library of Korean content,” making it the perfect way to watch Korean Dramas, and now in the easiest way possible.

(This announcement was first exclusively made on Deadline.)

How excited are you about Kocowa on Amazon Prime Video? Will it replace your love for DramaFever? Let us know in the comments below.