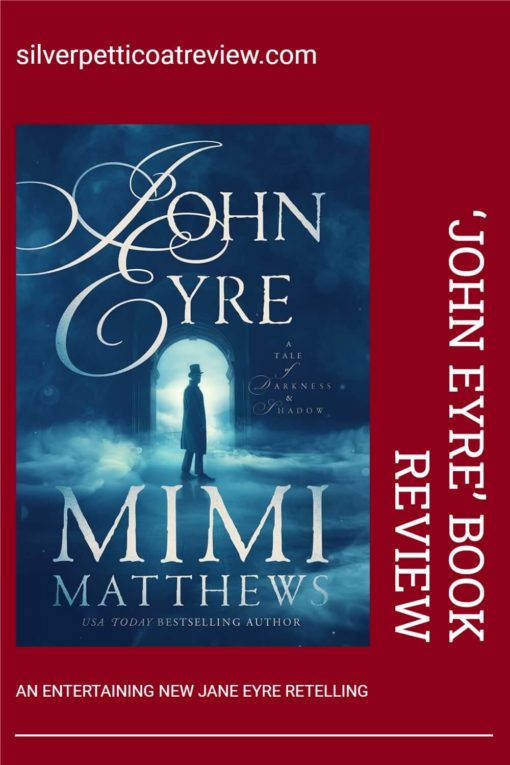 Disclosure: I received a free copy of John Eyre from the publisher via NetGalley. All opinions in the book review are my own.

Yorkshire, 1843. When disgraced former schoolmaster John Eyre arrives at Thornfield Hall to take up a position as tutor to two peculiar young boys, he enters a world unlike any he’s ever known. Darkness abounds, punctuated by odd bumps in the night, strange creatures on the moor, and a sinister silver mist that never seems to dissipate. And at the center of it all, John’s new employer—a widow as alluring as she is mysterious.

Sixteen months earlier, heiress Bertha Mason embarked on the journey of a lifetime. Marriage wasn’t on her itinerary, but on meeting the enigmatic Edward Rochester, she’s powerless to resist his preternatural charm. In letters and journal entries, she records the story of their rapidly disintegrating life together, and of her gradual realization that Mr. Rochester isn’t quite the man he appears to be. In fact, he may not be a man at all.

From a cliff-top fortress on the Black Sea coast to an isolated estate in rural England, John and Bertha contend with secrets, danger, and the eternal struggle between light and darkness. Can they help each other vanquish the demons of the past? Or are some evils simply too powerful to conquer?

John Eyre: A Tale of Darkness and Shadow is a fast-paced, thrilling novel with a spooky atmosphere and good prose fitting to a book paying tribute to 19th-century gothic fiction. The book is an enjoyable read for fans of classic gothic stories with hints of monsters and romance.

It doesn’t take long when reading John Eyre to realize that it’s not just a retelling of Jane Eyre – but a mashup of Jane Eyre and Bram Stoker’s Dracula. I also saw elements reminding me of Rebecca, The Vampyre, and The Turn of the Screw – all five books I love, so I was thrilled by the book’s influences.

Without giving much away, the mashup mostly works well, as do the characters. However, I found myself more intrigued with the letters and diary entries from Bertha Mason Rochester than the protagonist John Eyre.

He’s not as dynamic as the original Jane but is still a likable character you root for throughout the gothic historical fiction novel. The romance is also lovely, leading up to a fabulous ending.

Now, I think Jane Eyre fans could take exception to the characterization of Edward Rochester (especially after reading the Author’s Note at the end) – being the beloved character he is.

I didn’t mind his characterization in John Eyre – even though I’m a huge lover of Brontë’s original character (and Byronic Heroes in general) and am not a fan of the anti-Rochester classic Wide Sargasso Sea.

I sympathize with Bertha and Rochester as characters in the original novel and find him more of a redemptive Byronic than an abusive Weinstein. And I do read Jane Eyre as a fabulous love story.

Even so, if you’re a huge Rochester lover like me, you can still appreciate the mashup as a separate entity to Jane Eyre. This “Edward” is a combination of Rochester and Polidori’s Lord Ruthven, which I think is an innovative, clever amalgamation – as Polidori based Lord Ruthven on Lord Byron.

Later, the Brontë sisters were also influenced by Lord Byron when they created the more romantic and sympathetic Byronic Heroes with Edward Rochester and Heathcliff.

So, in John Eyre, the combination of the characters is a way for Matthews to pay homage to classic romantic monsters without souls (IE: Lord Ruthven) and to Charlotte Brontë’s timeless novel.

I also think Matthews writes with an affection for Jane Eyre. The book is a fun read, and the twists are clever.

Overall, I recommend reading John Eyre if you’re a fan of both Jane Eyre and Dracula and appreciate homages to classic novels of the past. Matthews’ writing is good, the characters interesting (especially Bertha), and the gothic atmosphere deliciously spooky.

It’s also a compelling novel – as you keep wanting to find out what happens and what all the secrets are. So, read it if you enjoy literary retellings with a paranormal twist and are looking for some good old-fashioned gothic thrills.

John Eyre would be a fun, gothic romance movie perfect for streaming or a feature film in theaters.

Content Note: Some violence and dark themes. The romance is pretty wholesome.

Have you read Mimi Matthews’ latest novel? Do you agree with our book review of John Eyre? If you haven’t read it, what are your thoughts on this novel? Do you plan to check it out? Let us know in the comments!

USA Today bestselling author Mimi Matthews writes both historical nonfiction and award-winning proper Regency and Victorian romances. Her novels have received starred reviews in Library Journal and Publishers Weekly, and her articles have been featured on the Victorian Web, the Journal of Victorian Culture, and in syndication at BUST Magazine. In her other life, Mimi is an attorney. She resides in California with her family, which includes a Sheltie, and two Siamese cats.