Almost 20 years ago, the Joan of Arc miniseries premiered on television. I remember watching it with intense interest as the history of Joan always intrigued me. Afterward, I recall reading the transcript of Joan’s trial so I could compare the accuracy of the miniseries I so enjoyed.

As far as I can tell, no Joan of Arc film has ever captured the completely true story of Joan in any version I’ve seen. She’s either presented as mentally ill or romanticized with historical inaccuracies. Nevertheless, the 1999 miniseries while flawed and dated is the one I like best. Was it completely accurate? No. But it at least aimed to tell her story with emotion, authenticity, and humanity. The miniseries also attempted to follow the factual events from the 15th century. 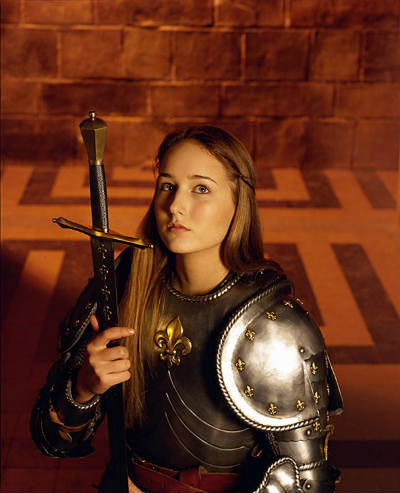 As a miniseries, Joan of Arc has time to tell her story from childhood all the way to her tragic death. The series follows Joan, a young illiterate peasant girl who hears voices from God and angels. With their messages, she believes she’s been chosen to end the war in France and lead them to victory. It’s her mission to crown Charles as the rightful King. And without any military training, she does just that, The Maid of Orléans, a legend and saint in the making.

However, while Joan’s mission succeeds, things go dark for Joan personally when she’s captured by the Burgundians and brought to trial as a witch and heretic. And for those who know history, you know what happens from there…

What makes the miniseries stand out from other biographical depictions onscreen is that Joan isn’t shown as schizophrenic. Neither is she perfect. Here, she’s human with a divine mission. She makes mistakes but she learns from them. And her faith inspires those around her including her loyal friends and guards/escorts, particularly with Jean de Metz. It’s her friendship with Jean that I loved watching unfold as a teenager. With subtlety, there’s even a hint of love between them that remains unspoken even in her death. Sure, probably not true in real life, but it’s certainly possible as he was entirely devoted to her. I personally liked this interpretation of history, the beauty found in their platonic friendship. This also served to bring Joan to life for me.

Furthermore, the incredible performances from the cast really brought the story to life for me as well. From the greats like Olympia Dukakis, Peter O’Toole, Powers Boothe,  Robert Loggia, Jacqueline Bisset, Shirley MacLaine, Maximilian Schell to awesome supporting actors like Chad Willett as Jean de Metz and Neil Patrick Harris as the weak King Charles VII (he’s fantastic in this role), there’s a lot to appreciate. But it is Leelee Sobieski as Joan that carries the film. Her passion and conviction of her beliefs feel true and authentic. Sometimes, even angelic. She is Joan, the historical miniseries, a testament to the history of Joan of Arc. At the very least, I believe you’ll walk away with a newfound interest in Joan’s history.

Overall, the special effects do feel dated which may turn some people off. Moreover, the battle scenes are probably the weakest scenes of the miniseries. They can be a little cheesy, but as someone who doesn’t like gore or a lot of violence anyway, that was fine with me and for others who liked the TV miniseries style of the 1990’s. I do also wish the miniseries depicted even more of Joan’s trial, using more of her actual words. Nevertheless, as a whole, Joan of Arc is a wonderful spectacle, an epic TV miniseries for those interested in history and the intriguing figure of Jeanne d’Arc.

Content Note: While not rated, I would say Joan of Arc feels TV-14 for violence.

Do you have a favorite film about Joan of Arc? Sound off below…

Our romance-themed entertainment site is on a mission to help you find the best period dramas, romance movies, TV shows, and books. Other topics include Jane Austen, Classic Hollywood, TV Couples, Fairy Tales, Romantic Living, Romanticism, and more. We’re damsels not in distress fighting for the all-new optimistic Romantic Revolution. Join us and subscribe. For more information, see our About, Old-Fashioned Romance 101, Modern Romanticism 101, and Romantic Living 101.
Pin this article to read later! And make sure to follow us on Pinterest.
By Autumn Topping on November 9th, 2018