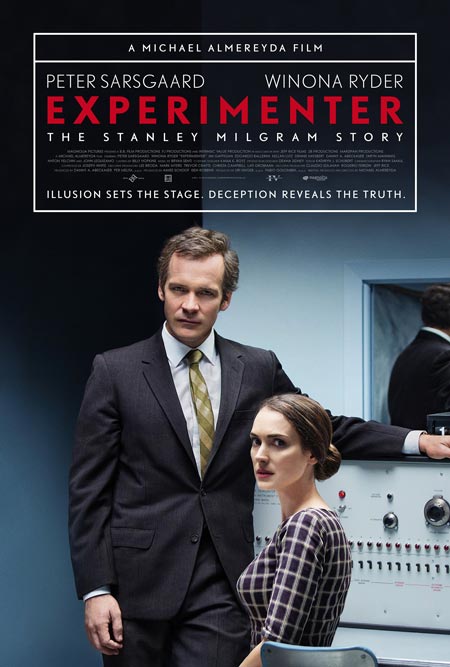 Experimenter is a little known indie film about the infamous 1961 Milgram Experiment. It is, in itself, an experimental period film with star Peter Sarsgaard as Milgram continuously breaking The Fourth Wall throughout. There is also an elephant in the room in a few scenes (yes, literally), very fake backgrounds purposely used, and more. In all, director Michael Almereyda successfully tells the story of Stanley Milgram and his famous experiment in a unique way that Milgram himself would probably have been pleased with.

Experimenter tells the true story of Stanley Milgram, the now famous social psychologist who conducted a controversial experiment in the early 1960’s with shocking results. In the experiment, the people being tested are given the role of “teacher” while the other person (secretly in on the experiment) plays the role of “learner.” They tell the “teacher” that this is an experiment about learning and whether or not punishment helps people learn more quickly. But that’s not the real experiment. The real experiment is to see how far the “teacher” will go in dishing out punishment simply because a person of authority (in this case a scientist wearing a lab coat) politely asks them to.

The results are intriguing to say the least. Most people give the “learner” electric shocks (all the way up to 450 volts) even when the person screams and says they have a heart problem. Why? They were told to. The person moans, questions, cries, but continues to deliver the shocks (no one is actually being shocked but they don’t know this). After the experiment is over, they don’t see themselves as being in the wrong. Rather, they blame the person of authority.

Still, a few do protest and leave the experiment for moral reasons. But why are they the anomaly rather than the norm? Milgram asks himself this question the rest of his life.

Experimenter is a fascinating look at human nature and the tendency as humans to have blind obedience, even when it’s morally questionable. Could this be the reason why so many people followed the Nazi’s? That is a question asked throughout the film by Milgram and the original reasoning for the actual experiment.

Experimenter is a strange film, but a fascinating one. I found myself glued to the screen watching the experiment unfold. The film doesn’t only focus on this particular experiment, however. Milgram is also the man behind “The Six Degrees of Separation” experiment which is touched on in the film.

Experimenter boasts a very strong cast with Peter Sarsgaard playing the role of Milgram to perfection. Then you have Winona Ryder (who needs to have a major comeback and be in more films because she’s amazing) playing his wife with her usual charm. Other notable cast members include Jim Gaffigan, Taryn Manning, John Leguizamo, Dennis Haysbert, Anthony Edwards and Anton Yelchin. In a surprising move, Kellan Lutz plays a small part as a young William Shatner (yes, the actor) who plays Milgram in a very fictional dramatization of the experiment.

Overall, Almereyda directed a very successful film with a solid script and memorable performances. Still, this is not a film for everyone. It is very artsy and very odd which may turn some viewers off. I, however, enjoyed the film and if you’re interested in psychology and human nature, then I can’t recommend this period drama enough. Experimenter is now available on DVD and streaming.

Our romance-themed entertainment site is on a mission to help you find the best period dramas, romance movies, TV shows, and books. Other topics include Jane Austen, Classic Hollywood, TV Couples, Fairy Tales, Romantic Living, Romanticism, and more. We’re damsels not in distress fighting for the all-new optimistic Romantic Revolution. Join us and subscribe. For more information, see our About, Old-Fashioned Romance 101, Modern Romanticism 101, and Romantic Living 101.
By Amber Topping on January 18th, 2016