Often compared to Jane Eyre, Anya Seton’s Dragonwyck is a dark, Gothic delight, complete with a haunted mansion, an elusive, cruelly beautiful lord of the manor, a young, naïve, vain, impressionable, silly girl on the cusp of womanhood, and secrets – generations of them.

Rebecca, Jane Eyre, Northanger Abbey, Wuthering Heights, The Tenant of Wildfell Hall, Far from the Madding Crowd, Tess of the d’Urbervilles – yes, themes and images and plot devices from the Brontë sisters, Austen, Hardy and du Maurier are heavily drawn upon and represented here. All blended into its own uniquely engaging tale set in the Americas.

A Letter Arrives and Then…

A May day in 1844, a letter arrives at a Connecticut farm, where a hardworking, humble, God-fearing family ekes out a living. The letter is an offer from a long lost, very distant New York relation on the maternal side, who seeks a companion/governess for his young daughter. And here starts our young heroine’s journey.

Miranda Wells is a beautiful 18-year-old with a brain filled with romance novels and desires for more than her current provincial life and work-a-day existence. She wants more. After initial protestations from her strict, Bible-thumping father, Miranda is eventually allowed to take this position, to move into an unknown relation’s home, far from the family farm and the daily prayers. 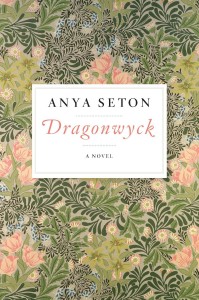 Nicholas Van Ryn is the distant cousin, Lord of the vast family estate Dragonwyck in Upper New York, hubby to the pompous, obese, idle Johanna (with the good bloodlines) and father to the skittish Katrine. He is a bedazzling Byronic beauty. And our fair lass is duly bedazzled – by his beauty, his wealth, his secretiveness, his aloofness, the excess of everything.

Like a Henry Higgins, Nicholas begins to transform our fair farm lass into a lady, molding her, shaping her, plying her with luxuries. Miranda is a grateful, overawed, willing participant in this transformation, doing all that is bidden of her by her master. She has no voice of her own; she acquiesces. Her vanities are fed, and her covetousness grows. She wants more. She wants another woman’s husband.

“Nicholas was of the type to fascinate a woman; they were ever attracted by ruthlessness and power, particularly when these were invested in a handsome physical covering.”

But what happens when she gets what she wants?

I don’t want to spoil the whole book. I’ve hinted aplenty with my allusions to the many above-mentioned books as to where this book is going. But Dragonwyck is essentially a mid-nineteenth century #metoo, a cautionary tale of losing one’s moral compass in the enthrallment and pursuit of all that money can buy and status can acquire. It’s a book about avarice, jealousy, manipulation, violence, innocence lost, female voices found and choices eventually made.

It’s also a book set during the Mexican-American War, leading up to the Civil War. And Anya Seton doesn’t shy away from the political discourse and unrest. A democracy has been founded in America and is finding its form. The tenants are revolting against a manor system – brought over from the Old World – that has them forever beholden to masters. There are uprisings against Dragonwyck and all that it stands for, a growing visceral rejection of the American aristocracy.

I quite enjoyed this historical political undercurrent in the novel. It adds great depth and nuance, setting this personal tale within a greater context, upping the stakes. Indeed, Dragonwyck and its ilk would isolate its inhabitants from the riff-raff of the “real” world. But the democratic riff-raff come a-knockin’. And one of those riff-raff is a salt-of-the-earth, man-of-the-masses doctor, Jefferson Turner – the Gabriel Oak to Miranda’s Bathsheba (hint, hint, nudge, nudge, Thomas Hardy’s Far from the Madding Crowd here). But no more of that.

Dragonwyck hits all the good Gothic notes, playing with the genre, taking it darker, more political, more modern. Indeed, as I was reading this novel from 1944, its political and personal message felt decidedly and aptly current. Miranda Wells may be no Jane Eyre, but you, as a reader, are invested in her finding her way, gaining her voice and using that voice.

Adaptation Recommendation: It’s been done – in 1946 with Gene Tierney, Vincent Price, Glenn Langan and Walter Huston. Although I do think a new go at a screen adaptation would be great. It’s a great story and still apt thematically in our day.

Content Note: Violence – sexual, physical, psychological – are evident, alluded to and described non-graphically. There’s also a murder or two and some substance abuse.

Have you read Dragonwyck? What are your thoughts on this Gothic novel? Let me know in the comments!

Our romance-themed entertainment site is on a mission to help you find the best period dramas, romance movies, TV shows, and books. Other topics include Jane Austen, Classic Hollywood, TV Couples, Fairy Tales, Romantic Living, Romanticism, and more. We’re damsels not in distress fighting for the all-new optimistic Romantic Revolution. Join us and subscribe. For more information, see our About, Old-Fashioned Romance 101, Modern Romanticism 101, and Romantic Living 101.
Pin this article to read later! And make sure to follow us on Pinterest.
By Jessica Jørgensen on September 6th, 2018