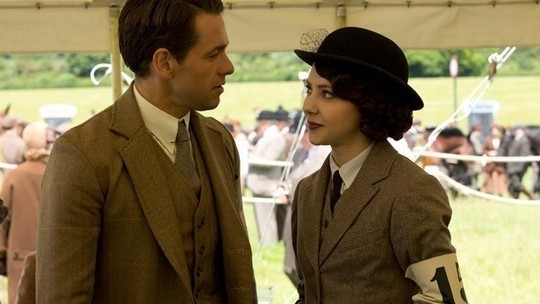 To date, I think last night’s episode was my very favorite. It was really quite engaging and seemed to capture even more of the era through the fashions and outings our beloved Crawley’s lives span and are a part of. 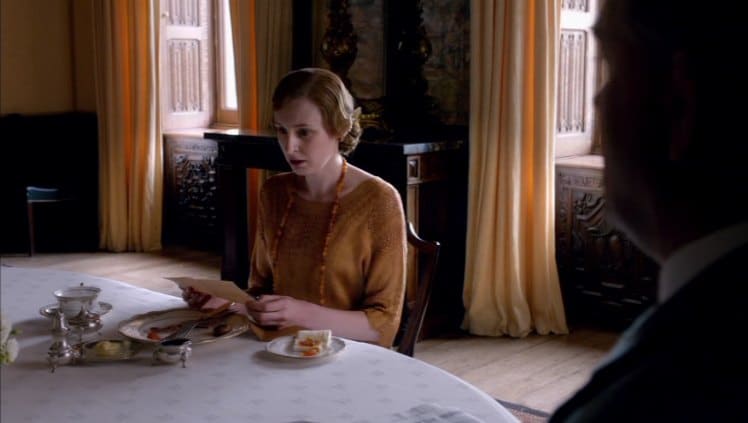 As the episode opens, it would seem death is again visiting the stately halls of Downton Abbey. A letter addressed to Edith is passed from hand to hand below stairs until it arrives in Carson’s hands and given to Edith. The impending news promises to be anything but good as an official tells her via the letter he’s coming to share what has happened to Michael. Robert manages to stiffly enter Cora’s room to warn her, though in spite of Cora telling Robert to move back in, he remains indifferent to her and treats his wife with contempt.

Later on, through Robert’s conversation with Cora, it’s revealed that Gregson is in fact dead. Only as a small consolation to Edith, he has left her his publishing house. This is something Robert hopes helps her get through this sorrow. Instead the news drives Edith to the Drewe farm where she’s denied seeing her child.

Since we’ve not checked in with the Bates lately in these recaps, I was happy to see a great side story between them last night. Last week, there was a quiet moment of hope and happiness between them when Bates promised to keep Anna safe all their married life and they can grow old with their children around them – their flirting is darling, really. Only later on, as Bates searches for Anna’s button box in their cottage, he finds the contraception and book that you’ll remember Anna hid earlier in the season at the bequest of Lady Mary. (Somehow I knew this would come back to haunt Anna.) Naturally, Bates believes that Anna has been taking precautions, not wanting to have his child because she believes Bates is a murderer. 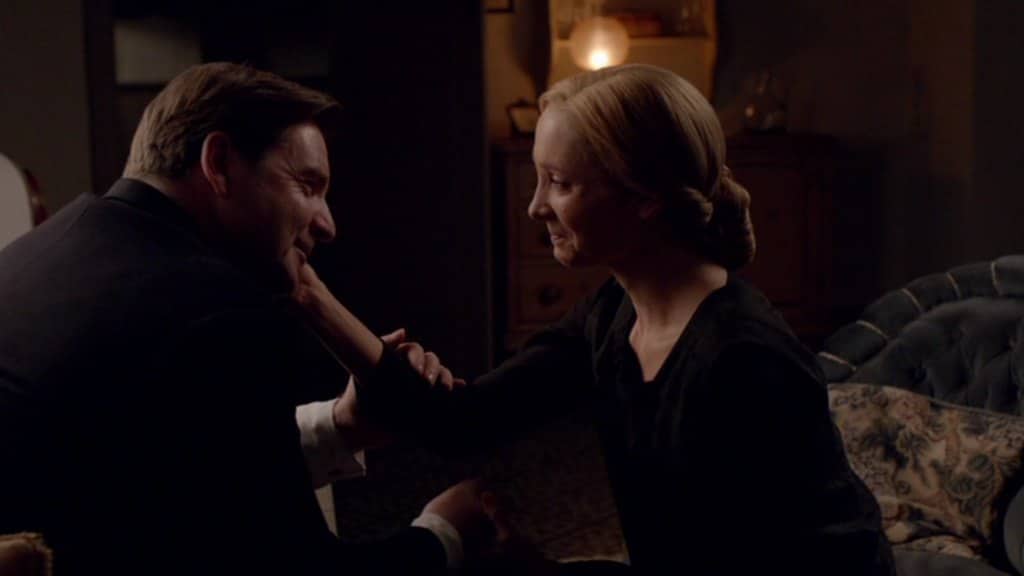 Husband and wife have much to work out and as it turns out, this misunderstanding is the best thing that could have happened to them. Following their row, Bates confronts Anna about the two items he found and he confesses to her that he wanted to kill Green (because he knew all along that Green was her rapist). He even bought a ticket to do so, but when on the train platform, Bates changed his mind – and his ticket stub would have proved that. Anna frantically tries to track down the ticket, which alas is not to be found and as most of us probably remember, it fell into the hands of Lady Mary last season and thinking she was protecting Bates, Mary burned the ticket hoping this would never return to haunt them. 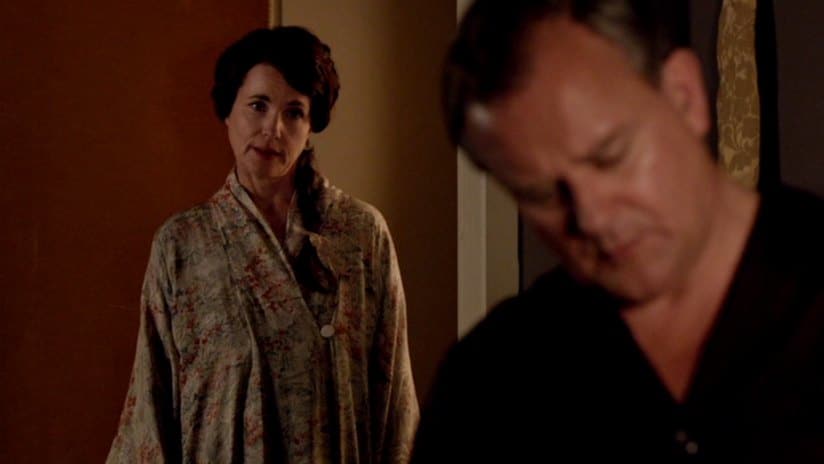 In possibly THE best scene of this installment, Cora finally tells Robert to quit being foolish and to return to her room. Unless he can tell her honestly that in all their years of marriage he never once let a flirtation get out of hand or gave another woman the wrong impression – insert awkward, nail-on-the-head moment here! Even if Cora didn’t know about Robert’s near-affair (which I might add came very close to being one and was desired by both parties and happened when Cora was on her death bed), score one for her. That’s right Robert, you just think about that. Unless he can honestly tell her nothing ever happened with another women, then he’d best stay away, otherwise she’ll expect him back in her bed tonight. Bravo, Cora.

Thomas’ Desperation for a “Cure”

For the past weeks, Thomas has been sickly. He grows worse until Baxter innocently intercepts a piece of his mail and reads what kind of “cure” he is attempting to give himself: one that involves taking away his feelings of homosexuality. He finally reaches a breaking point and without anyone to turn to, and seeks out Baxter who takes him to see the doctor. This even after he held something over her head and told Mosely about the theft, and in last night’s episode ratted Baxter out to the police regarding investigation of Bates and Anna (Baxter had minor details about Bates disappearance, something Thomas knew and used against her). Thomas brings all the grief he gets upon himself really. The staff downstairs are nice to him (far more than I would be) even knowing and experiencing the treatment he imparts on anyone who dares to show him an ounce of kindness. By the time Baxter is done seeing to it that Thomas be thoroughly treated by Dr. Clarkson, Thomas is on the up and up and Dr. Clarkson helps Thomas see reason that no medicine will provide him the cure he seeks.

Contrary Mary’s Haircut and a Point to Point Race 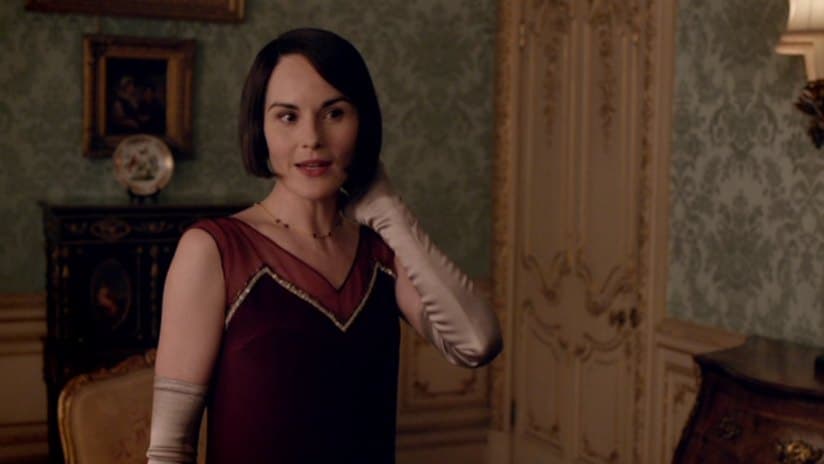 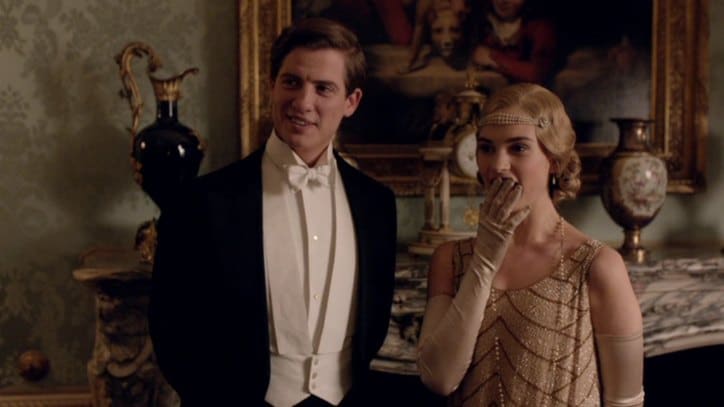 Upstairs, Mary is still getting ready for her day and she’s occupying her time reading her post as Anna places the finishing touches on her hair. Turns out, Charles and Tony plan to ride a Point to Point race, and competitive spirit she is, Mary wants to compete with them. This makes Mary wonder if she’s looking frumpy and she decides to show her suitors what they’re missing (which she does thanks to a fashion-forward new haircut). Oh, Mary, Mary. We all probably knew that Mary could waver in her decision and of course, tonight she proves us right. It isn’t so much that she is flip-flopping her decision, though with Mabel now on the scene, Mary seems devout in her decision not to just step aside.

Then just prior to the race and picnic, Atticus gets acclimated quickly to the Crawley family when there is a row between Mary and Edith over Mary’s insensitivity over her news. Of course, Mary bites back by telling Edith not to bother coming to their picnic and racing event. Weary as I am of Edith’s characterization in general, I realized while watching this that she really is a character many will likely relate too. Mary is the opinionated sister all the men flock around then there was the vibrant, passionate Sybil and stuck in-between is Edith, lost in the mix. 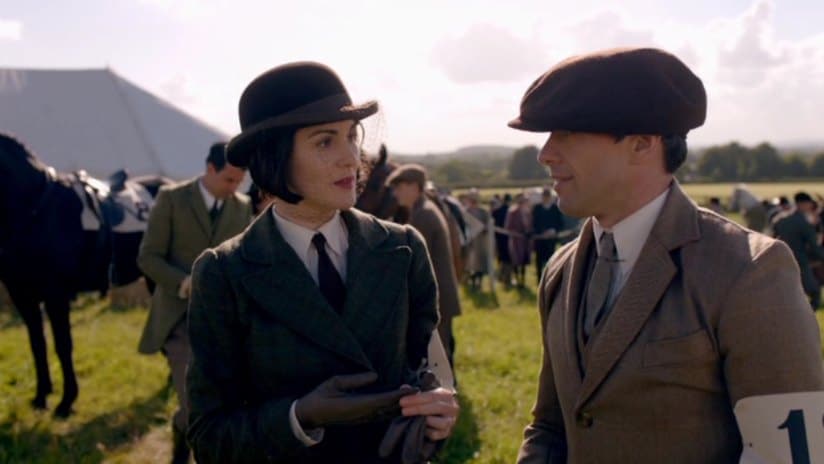 Of course, their racing day goes off without a hitch and Tony comes face-to-face with Mabel. Mary doesn’t make it easy for her though by beating Mabel in the race and showing up with a new fashion statement to boot – so as not to make Tony’s reintroduction to Mabel too easy.

Edith has come to a decision and takes advantage of the quiet house to escape. Having stayed behind from the picnic, Tom begs her to talk to him since he seems to be the only one she would talk to. She urges Tom not to let the family flatten his goodness out of him, which I might mention I thought unfair of her. From there, Edith heads to the Drewe’s farm to retain custody of her daughter and to a hysterical Mrs. Drewe she provides a birth certificate. 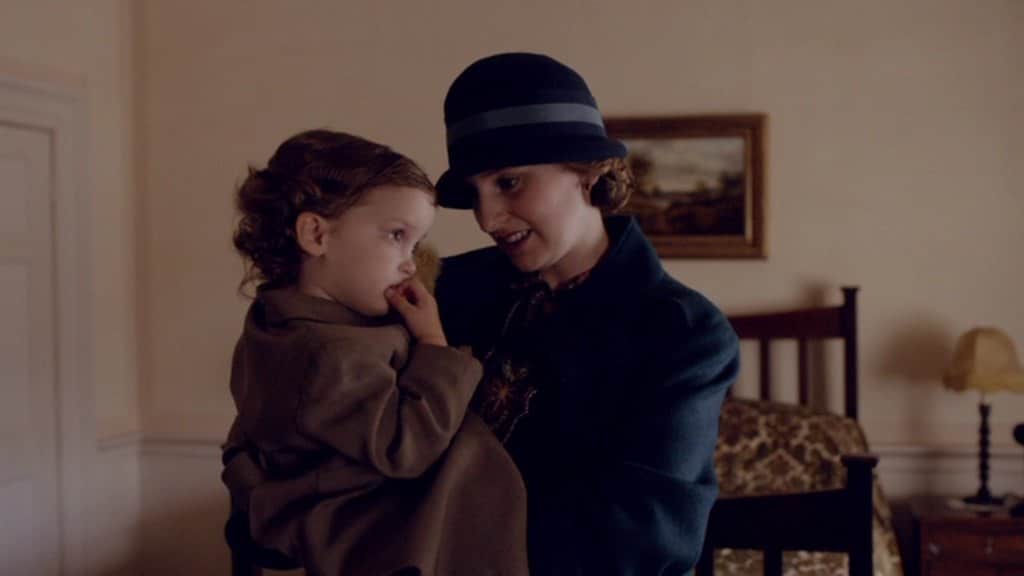 Upon their return to the house, the entire family is aghast over Edith’s leaving but as the only person who knows Edith’s secret, Violet attempts to find Edith only she’s too late and we close seeing Edith happy in a boarding room cradling her daughter.

What did you think of last night’s episode: do you have any theories about where Anna and Bates story is going (one Fellowes seems determined to end unhappily) or how about Mary’s pursuers – who will win her hand? Finally, did you think Edith’s choices were right? Share any thoughts you had and be on the lookout for another recap next week.

Our romance-themed entertainment site is on a mission to help you find the best period dramas, romance movies, TV shows, and books. Other topics include Jane Austen, Classic Hollywood, TV Couples, Fairy Tales, Romantic Living, Romanticism, and more. We’re damsels not in distress fighting for the all-new optimistic Romantic Revolution. Join us and subscribe. For more information, see our About, Old-Fashioned Romance 101, Modern Romanticism 101, and Romantic Living 101.
Pin this article to read later! And make sure to follow us on Pinterest.
By Rissi JC on February 9th, 2015