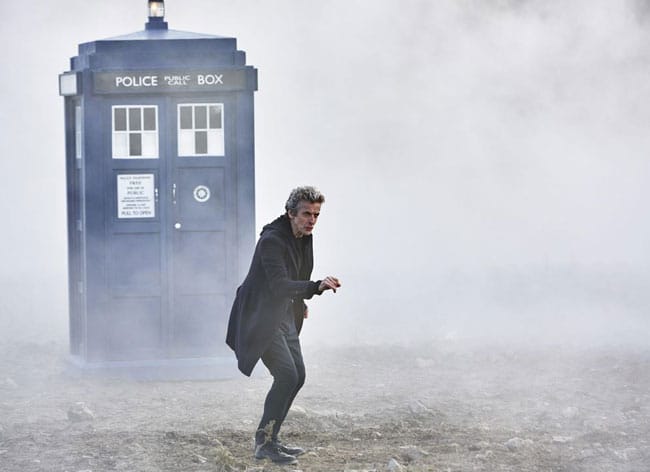 I’ve been looking forward to Doctor Who season 9 for what seems like forever, so perhaps my expectations were a little too high and I didn’t love it is as much as I hoped I would. That being said, there was still a lot to like in the season 9 premiere (including being highly entertaining).

Recap of The Magician’s Apprentice

The episode, “The Magician’s Apprentice” opens with the Doctor attempting to rescue a child in the midst of some unknown war, only to realize that the child is in fact Davros, the creator of the Daleks. Considering all the evil Davros does later on, the Doctor abandons the child to his fate. With creepy hands poking out from the ground and the introduction of a young Davros, I really thought the beginning promised an awesome episode. 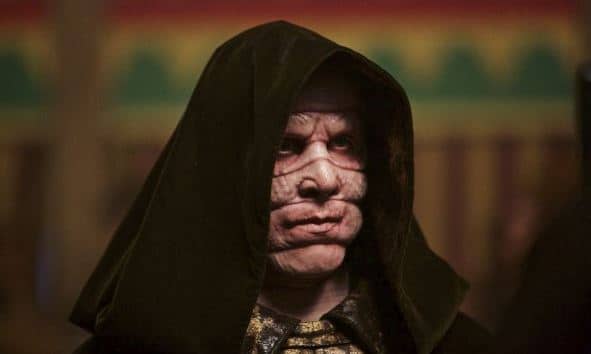 Skip ahead to this creepy gliding guy looking for the Doctor, even visiting some familiar faces (including the Shadow Proclamation). It was all very Star Wars in a good way. Unfortunately, we never stayed in any of these places for long. Finally, we see the Doctor overhear that Davros is looking for him and that Davros remembers (which is interesting considering he never remembered in any of their other past encounters).

Back on earth, Clara is in the middle of teaching when she looks out the window and sees a frozen plane. Soon, UNIT has called for her, and with Kate Stewart they try to uncover just what was going on. The earth plot here reminded me a lot of Russell T. Davies Doctor Who, which got me a little excited I’m not going to lie. When the plane scheme then revealed Missy (The Master), I was slightly disappointed because I knew this story had already pretty much come to an end. (I’d also like to point out that it’s a shame we never hear about Martha – who works for UNIT – and Mickey or even Captain Jack. These types of episodes would be the perfect platform for their characters to make a guest appearance or two. In fact, I’d love to hear about many of the characters from the first few seasons if only in reference, who seem to no longer exist in the Doctor’s mind or at least on the show.) 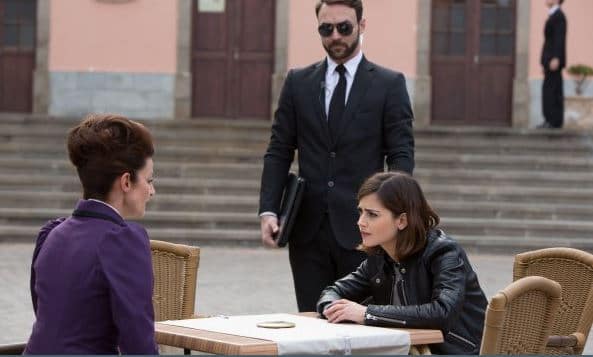 Clara meets with her because Missy has a message: the Doctor has only a day to live, Missy knowing this because the Doctor sent her his last will and testament, something that goes to his closest friend (more on this later, but for now I merely roll my eyes).

Together, they find the Doctor in the 12th century throwing himself a death party by playing guitar on top of a tank.

Snake guy (the one who knows Davros) shows up again and takes the Doctor to see him (why the Doctor feels he must go is one big question). Clara and Missy opt to go with him, despite his protests.

While the Doctor meets with Davros, Clara and Missy escape and realize they are on Skaro, the planet of the Daleks. It’s not a happy revelation. Being on a planet of Daleks never promises a good outcome…

Meanwhile, the Doctor and Davros catch up, Davros even revealing videos and audios of the Doctor from the past (I admit to totally loving this part and seeing David Tennant). It is then Davros shares his plan as the Doctor watches Missy, Clara, and then maybe the Tardis get destroyed (It’s all a little “Dalek” from season 1 but not nearly as good in my book because there is no emotional conflict or choice). We then skip ahead again by showing the Doctor putting a gun to child Davros’ head and saying he had to kill him in order to save a friend. Of course, the opener is to be continued.

Review of The Magician’s Apprentice 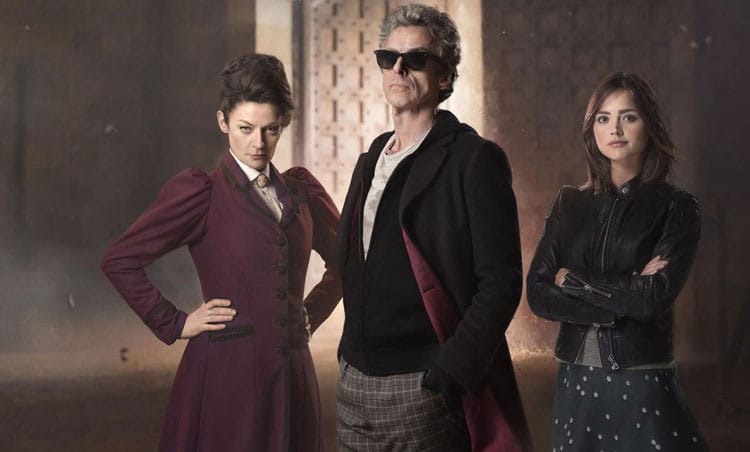 As a whole, there were a lot of great things about “The Magician’s Apprentice:” Atmosphere, a little nostalgia, Davros (makes me think of “Journey’s End which is where we saw him last), and the return of the Daleks are just some of the highlights. On the surface level, the episode is dark, but still wildly entertaining. It’s when I look beneath the surface that I don’t love the season premiere as much as I could.

First of all, the repetition of plots is starting to get old. Didn’t we just deal with the Doctor dying in seasons 6 and 7? Not to mention, that in those moments, no will and last testament ever surfaced. I guess ‘this’ is the time the Doctor really believed he was going to die. Yeah, I didn’t buy it. Plus, how many times has Clara died now? There’s no suspense anymore.

Then there is the supposed ‘friendship’ between the Doctor and Missy. Look, I get they have a history and a connection, but saying they are close friends is a downright alteration of the show. The Master has and always will be a murderous psychopath. He, now she, has killed countless individuals in a cruel and cold way (including those men from UNIT, one a father to a baby). Just consider the Master and Martha. Was her sacrifice to walk the earth and save the people on the planet meaningless? Was she just a puppy in the middle of their flirting game, a game that would have ended millions of lives?

What about Missy’s plan to turn dead corpses of characters we loved into cybermen? What about what she did to Danny Pink just two episodes ago? But somehow, this crazy lunatic is the Doctor’s best bud? In all of New Who, I believed the Doctor wanted to save the Master because he was the last of his kind, but never because the Master was his closest friend and confidant. I could buy they were in the very, very distant past, but certainly not now. This entire new characterization rubs me the wrong way, and the sooner it comes to an end, the better off the show will be.

And speaking of Missy, I hated all her innuendos despite Michelle Gomez’s brilliant performance as the Master. Why does everything have to be an innuendo with Moffat? With Clara, the Jane Austen innuendo was also obnoxious. I’ve always wanted a Doctor Who/Jane Austen crossover and it gets ruined by some offhand Clara remark about kissing? I just do not understand Moffat’s interpretation of famous women in history. An alien/supernatural story in Bath (explaining why she hates Bath) would have been so much better! 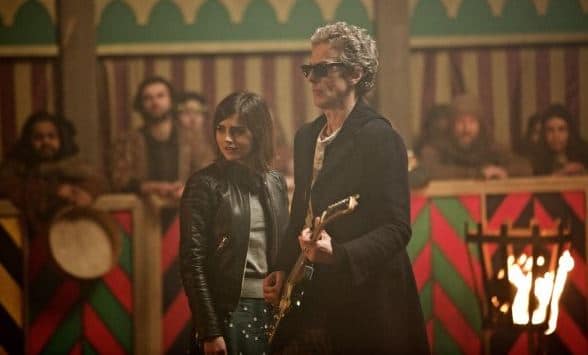 Finally, I have to say that I didn’t get the characterization of the Doctor. Aside from the BFF friendship between him and Missy (and I’m hoping the end cliffhanger was about saving Clara and not Missy), he didn’t really do much. Why is his final day a shallow party in the 12th century? Why doesn’t he do anything in the entire episode to try and stop Davros aside from trying to kill him as a child? Why isn’t the Doctor acting like the Doctor? No plans on the fly, no speeches, nothing.

I’m hoping that because this episode was only part one, everything will all come together in part two. Let’s see if all the pieces can come together in a nice little bow (including answering just exactly how Missy is still alive in the first place). Perhaps I might have loved this episode more if I didn’t have “The Stolen Earth” and “Journey’s End” to compare it to. Still, even without the comparison, the plots and characterizations are a little messy.

What did you think of “The Magician’s Apprentice?” Sound off in the comments…

Our romance-themed entertainment site is on a mission to help you find the best period dramas, romance movies, TV shows, and books. Other topics include Jane Austen, Classic Hollywood, TV Couples, Fairy Tales, Romantic Living, Romanticism, and more. We’re damsels not in distress fighting for the all-new optimistic Romantic Revolution. Join us and subscribe. For more information, see our About, Old-Fashioned Romance 101, Modern Romanticism 101, and Romantic Living 101.
Pin this article to read later! And make sure to follow us on Pinterest.
By Autumn Topping on September 20th, 2015