If there was only one thing the Hallmark Channel excels at, it would be the production of originals that burst with joyfulness. (Fortunately, they have many other qualities as well.) Their streak for this record remains intact with their Christmas movie A December Bride.

The story introduces us to Layla O’Reilly (Jessica Lowndes), a hardworking young professional. Working under the demands of a perfectionist boss, Layla now feels ready to make strides towards owning her own business. A business that would allow her to use her talent as an interior decorator to stage apartments and houses real estate agents are trying to sell. But first, she has to find a client willing to take a chance on her. However, her life takes a detour when her fiancé, Jack leaves her for her cousin Jessica.

Then a face from her past reenters Layla’s life. Seth (Daniel Lissing) is Jack’s best friend, and also the man partly responsible for the subsequent engagement between Jack and Jessica. Or so this is Layla’s perspective of the situation. Things become increasingly more complicated when Layla agrees to Seth’s proposition they go to Jack and Jessica’s wedding. Together. One small white lie leads to another, and soon her family believes Seth and Layla are engaged.

I’ll admit I watched this film with some sense of bias since I’ve been a fan of, and still do adore Denise Hunter’s novels. The story on which this is based is actually a novella (titled the same), but the film does a terrific job of lengthening the script, which pulls more from the story. This is something which I appreciated. I will say some of the directional cues come across a wee bit stilted, and sporadically the transitions don’t flow nicely. But this is a story (without question) that enchants. 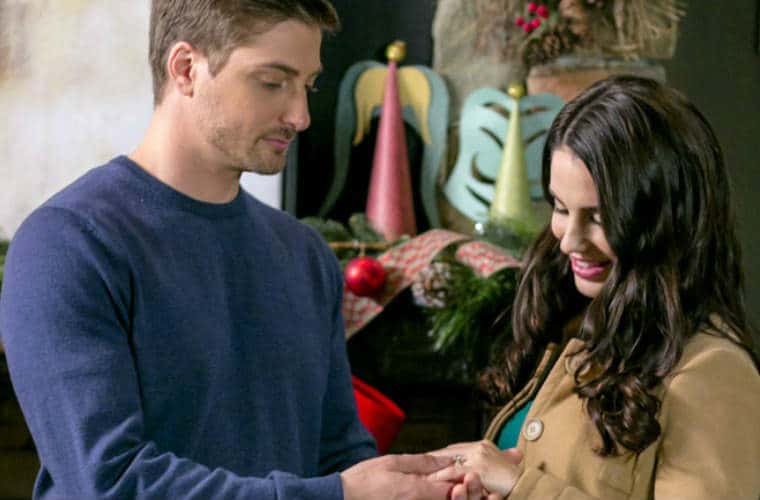 Despite these minor lapses, there is much to recommend this. One of which being Daniel Lissing. Fans (otherwise known as “Hearties”) of Hallmark’s When Calls the Heart series will enjoy seeing Jack Thornton in this. For me, not only was seeing Lissing play in a contemporary a plus, it was also wonderful to discover Seth is just as charming (and wonderful) in “real life” as he is on the page. Similarly, Jessica was a delightful Layla. In fact, both actors made these characters come to life precisely as we imagine them to be.

In all, the script keeps closely to the novella Hunter wrote. I’d still recommend you read the story if you haven’t yet, especially since it’s a quick read. For example, you’ll meet Beckett (Layla’s brother) who you’ll gain more insight of (in the book) in comparison to the film. In the end, this is, as is the gold standard of its network, a charming and wonderful holiday film. I thoroughly enjoyed the cast and their respective characters not to mention the sweet way Seth truly loved Layla.

Check your listings for repeat showings of A December Bride throughout December on Hallmark.

Our romance-themed entertainment site is on a mission to help you find the best period dramas, romance movies, TV shows, and books. Other topics include Jane Austen, Classic Hollywood, TV Couples, Fairy Tales, Romantic Living, Romanticism, and more. We’re damsels not in distress fighting for the all-new optimistic Romantic Revolution. Join us and subscribe. For more information, see our About, Old-Fashioned Romance 101, Modern Romanticism 101, and Romantic Living 101.
Pin this article to read later! And make sure to follow us on Pinterest.
By Rissi JC on December 2nd, 2016