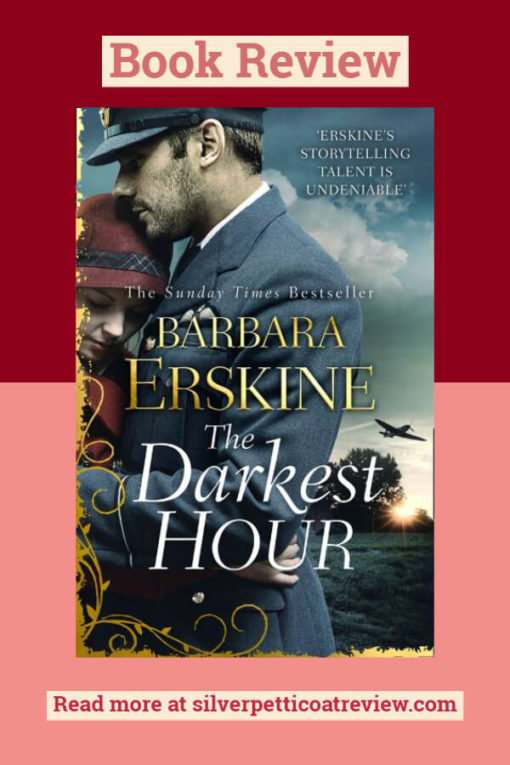 Book review of The Darkest Hour, a clean romance full of suspense.

In the summer of 1940, most eyes are focused on the skies above the South of England. The battle for Britain has just begun. But young Evie Lucas has eyes for no one but a dashing young pilot called Tony. Evie has a glittering career as an artist ahead of her but seems to be wasting her time sketching endless portraits of Tony. She wants his parents to have something to remember him by in case it all goes wrong in the war.

Seventy years later, and recently widowed art historian Lucy is trying to put the pieces of her life back together. And in order to do that, Lucy needs to uncover the mystery surrounding a painting in her home. But as she accidentally ends up stirring up a hornet’s nest of history which has been deliberately obliterated, Lucy finds herself in danger from people past and present who have no intention of letting an untold truth ever surface.

Are you a fan of romantic historical fiction? Of dual timeline narratives, where wrongs of the past have repercussions in the present? Where present doings can finally set right past wrongs? Where happy endings are out there if you wait long enough, even after death?

Well, then Barbara Erskine’s The Darkest Hour might be your next read. And if you also enjoy some paranormal elements, well, then you’re in for a treat.

The Painting that Connects Timelines

In the present day (2010ish), Lucy Standish is a newly widowed art historian, who’s just received a grant to research the life and works of the artist, Evelyn Lucas. The impetus for his project came from a self-portrait of the artist which her late husband Laurence, an art restorer and gallery owner, had purchased for a song.

Laurence had set out to prove the veracity of this painting, that this is an Evelyn Lucas, as well as establish its provenance when he was killed suddenly in a car accident. Or was it an accident?

The grieving widow decides to continue Larry’s work in her own way. The painting still stands on her husband’s easel in his atelier, the last thing he was working on. It draws Lucy again and again, and then strange things start happening around that painting. Lucy sees things, experiencing things, inexplicable things. The painting appears to be haunted.

The haunted painting prods her out of her grief and into researching Evelyn Lucas’s life, which means contacting the family. She gets a foot in the door, introducing herself to Evelyn’s grandson, who is using Evelyn’s old cottage as a weekend home. Michael Marston grants Lucy access to Evelyn’s papers and atelier, so Lucy starts sleuthing, uncovering some long-hidden secrets along the way – secrets that have present-day repercussions.

Back in the 40s, during WWII, a young Evie Lucas is living on her parents’ farm, struggling to make inroads as an artist, to break into the market, which is very male-centric. She is commissioned as a war artist, allowed to paint planes and factories, and the like.

And it is hanging around the local airfield that she meets the charming Tony, a friend of her pilot brother’s. Flyboys’ lifespans are limited, and the war is heightening and condensing time. They embark on a heady love affair.

But Evie’s life is not always her own. The farm is in financial straits. Eddie Marston, the son of the prominent local landowner, has taken it upon himself to be Evie’s agent/manager. And he has plans to be something more. He’s got money and connections and clout and has known her all their lives. And flyboys’ lifespans are limited.

And I’m not going to reveal any more there.

The Darkest Hour is an enjoyable read. Sure, I got a bit frustrated at times with a particular young artist who was a bit too passive at times. And the big bad guy is as dastardly as they come, even after death.

Yeah, there are some Gothic/supernatural elements going on here. And there’s a passionate love affair, as well as a gentle, slowly building, subtle one. There’s a poignant theme about loss, and how you find your way back to life and living. I like such themes.

All in all, The Darkest Hour is a good read, a solid piece of work, not magical, but satisfying all the same.

Adaptation Recommendation: Yes, please. I could see this on the screen as a miniseries. I love a good haunting tale (that doesn’t go into gore and horror), a kind of cozy thriller.

Have you read The Darkest Hour book? If not, let me know if you’re going to check it out! Let’s discuss the book below in the comments!