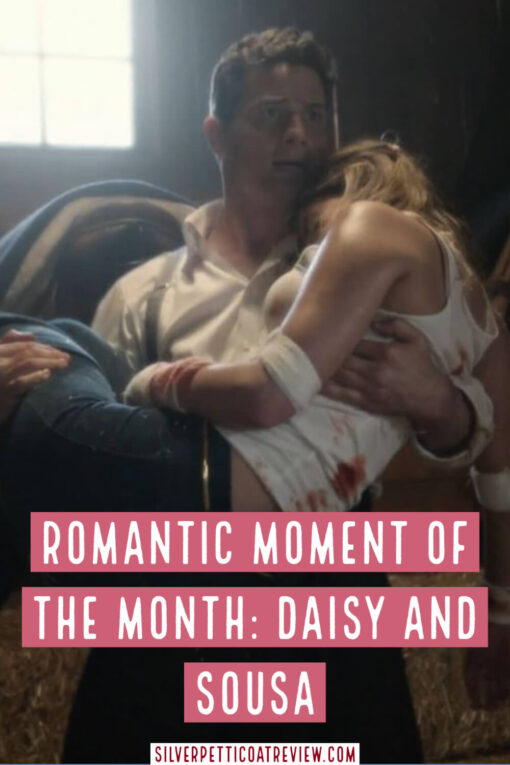 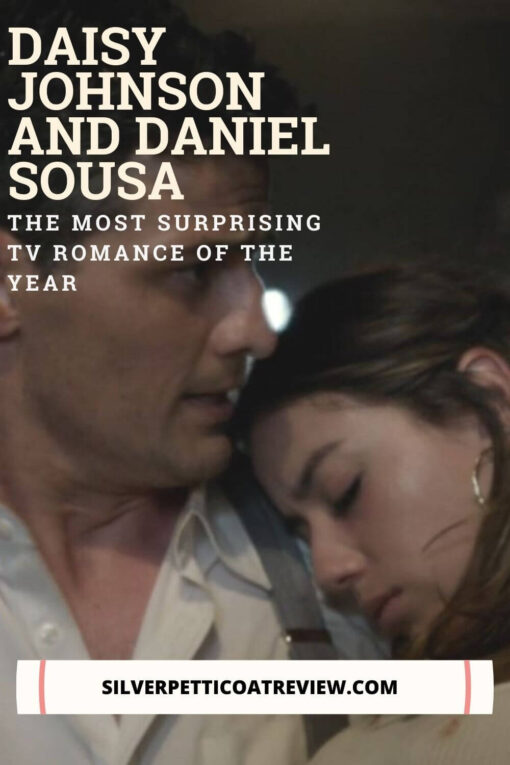 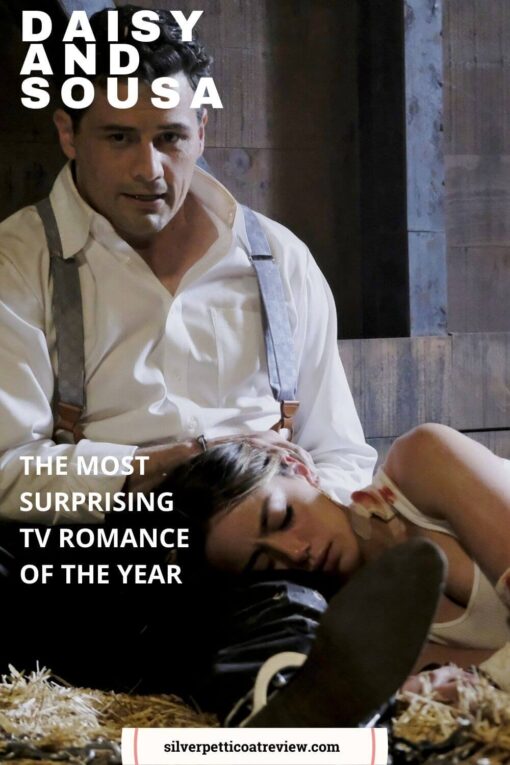 Our pick for the romantic moment of the month goes to Daisy Johnson and Daniel Sousa from Agents of S.H.I.E.L.D. Their time travel love story has won us over.

Okay, I’m a sucker for time travel romance. The Doctor and Rose from Doctor Who. Somewhere in Time. Being Erica. I’m also a fan of romances that surprise you in a good way. You know…the ones that sneak up on you, and then WHAM…you’re a fan for life. The ones you don’t see coming. Well, Daisy and Sousa are the time travel TV couple no one saw coming, which makes them so good.

Of course, we don’t know what will happen next in the final season of Agents of S.H.I.E.L.D. (four episodes have yet to air), but we can all hope Sousa makes it to the end of the series and he and Daisy begin a romantic relationship together. Their pairing just works, and it would be depressing to give these characters more tragedy than happiness before the series’ end.

In one of the strangest romantic setups in television history, Daniel Sousa (Enver Gjokaj) and Daisy Johnson (Chloe Bennet) both begin on different TV series (Sousa on Agent Carter) and live in different times. Sousa is a WWII hero, while Daisy is a millennial feminist with superpowers.

For the longest time, Daniel Sousa was the assumed future husband of Agent Peggy Carter. That is until Avengers: Endgame revealed Peggy’s future husband was none other than Captain America himself.

Ouch. That’s terrible news for Sousa, who finally shared a romantic kiss with Peggy in the final moments of the canceled too soon Agent Carter series (back in 2016). For Daisy, she’s faced heartbreak after heartbreak, most notably with Lincoln’s (Luke Mitchell) death. Instead of romance, she focused on becoming a leader and learning to become a better version of herself.

While from different times, these two fight for the greater good, no matter the cost to themselves, which brings us to how the unlikely duo cross paths.

Daisy and the rest of the S.H.I.E.L.D. team travel back in time to stop evil robot Chronicoms from changing history and invading the planet. While time traveling, they end up in the 1950s and cross paths with Daniel Sousa, an early leader of S.H.I.E.L.D. It’s clear he’s no longer with Peggy and is still sad about it. However, he doesn’t know that in the original timeline, he’s to die soon, becoming the first fallen S.H.I.E.L.D. agent. It’s not something that can change, as his death inspires future agents.

Thankfully, the future S.H.I.E.L.D. team (most notably, Coulson) figured out how to have history believe he died while removing him from the timeline, thus bringing him with them on their time travel adventures to save the world. I know. It’s a lot. But it does make sense if you watch the show.

Sousa is overwhelmed at first and wants to go back, but he handles revelations of aliens, time travel, his “death,” and evil robots with aplomb. Let’s say he’s a real gentleman about it.

Still, the idea of Sousa and Daisy at this point is nothing more than perhaps a few fan fiction writers beginning to sharpen their pencils because of good chemistry.

THE BEGINNING OF A NEW RELATIONSHIP?

Everything begins to change when the team time travels forward to the 1970s. At first, Sousa decides that after helping the team with the mission, he will stay in the ‘70s, rather than continue to move forward in time. He’s had a bit of a culture shock.

But on this mission, everything changes, and a new “ship” is born. Nathaniel Malick (one of the season’s villains) kidnaps Daisy and Daniel so that Malick can steal Daisy’s powers. Malick tortures Daisy and leaves her dying. Fortunately, Sousa is there to help and comfort her.

As she lies on the ground severely wounded, he holds Daisy in his lap and tells the previously untold story of how he ended up with a limp during the war. The fact that he opens up to Daisy when he didn’t with Peggy is telling. He then pleads with her to fight and to live. She hands him a piece of glass shard she managed to hide in her hand. It’s their means of escape.

A KNIGHT IN SHINING ARMOR

Ultimately, they break free with Daisy barely hanging on to life with Daniel carrying her away to safety. Their chemistry and the emotional connection between them are palpable. From this point on, Sousa always looks out for Daisy, like her own personal knight in shining armor. I found him a bit too much of a gentleman with Peggy, but his intense chivalry works well with Daisy. He may be old-fashioned, but strong women do not threaten him. He likes it.

Plus, their sizzling onscreen chemistry, the natural ease of the two characters, immediately sparked excitement online about the new “ship” with entertainment articles springing up about the surprise pairing. But at this point, a romance between them was more a hope than a reality. Because the final season was filmed a while back, I wondered, ‘what if no romance ever developed between them despite their obvious chemistry?’ It would be too late for the writers to change course direction after seeing the positive fan reaction because the series already filmed and finished.

Thankfully, the chemistry WAS purposeful, and their romance planned by the writers, which brings me to the romantic moment of the month.

“AS I HAVE ALWAYS BEEN”

In this week’s episode of Agents of S.H.I.E.L.D. (arguably one of the best episodes of the series), the team is caught in a time loop and is on the verge of being erased from existence. The only two who remember each loop are Agent Coulson and Daisy Johnson. And time is running out fast.

At the beginning of each loop, Daisy wakes to find Daniel sleeping in a chair next to her. Of course, she wonders why he’s always there taking care of her.

After experiencing many time loops (one in which he dies), she asks him:

He responds, “Because you don’t.”

Seeing how much he supports her time and time again begins to affect her more with each loop.

Finally, Daisy decides to break from trying to end the time loop and save them all. She must know why – she must know what he’s thinking. (I mean, who wouldn’t want to know if the time-traveling chivalrous Captain America-like guy likes you?) Of course, there’s always the safety net of him not remembering – you know, in case his reasons are purely platonic – feelings of support for a fellow “soldier.”

Daisy pulls a chair up next to Daniel to get an honest answer out of him.

“Every time I ask you for help, you say yes,” she tells him. “Even if I don’t ask, you’re waiting here to make me rest…or whatever. Why? Be honest.”

“Honest?” Sousa asks. He hesitates as if deciding how much he’s going to say. (Maybe he’s still affected by Peggy’s rejection of him.) And then comes his speech.

“I know your type…I know people like you. Some of my favorite people are people like you. Focused on the greater good, even at your own expense. You want people to think you like being on your own even though you always end up back with friends. You hate losing…”

“Yeah, but you’ll keep running at the problem full-tilt until you either solve it or slam headlong into a brick wall.”

“Some of those walls are literal,” she explains.

“But how does that–”

“Because when people like you run into those walls, you should have someone there to back you up,” Daniel tells her.

DANIEL WANTS TO BE DAISY’S SOMEONE

His thoughtfulness affects her. She sits back, hopeful, asking: “And you…you’d like to be that someone?”

And then, almost as if he’s letting go of Peggy forever, he says, “Not for everyone.” Here, Daniel is telling Daisy he wants to be her someone. And it’s almost certainly in a romantic context. He then becomes light-hearted as he compliments her. “It helps if they’re fun to be around and if they say what they mean and if they have that superpower where they can rock things around, which is very impressive.”

Daisy understands him perfectly and replies: “That is awfully specific.”

“Mmm, hmm,” he says, nodding in agreement. There’s an understanding between them without words. They know they like each other now.

Daniel then ends the conversation by asking how he can help her like the perfect gentleman he is.

The scene is subtle, but oozing in emotional intensity, making it the must-watch romantic moment of the month! You can watch the complete scene in the clip below.

On the very next loop, Daisy immediately asks for his help (which, of course, he’s ready and willing to give), and in return, she kisses him. He then kisses her back! It’s a good kiss, leaving him wondering what’s going on.

She has her memories of why he supports and helps her while he doesn’t. Unfortunately, he won’t remember this kiss either. Thankfully, the episode ends with Daisy remembering, so that’s good news for what’s coming next.

Here’s to hoping the next episode isn’t Daniel’s last. He’s not a series regular but has been in a good majority of the season so far, making me nervous about his continued presence in future episodes. Their “possible” relationship is just too good, and one of the key reasons why Agents of S.H.I.E.L.D. is having a near-perfect final season.

I’m crossing fingers the surprise Agent Carter/ S.H.I.E.L.D. crossover romance pays off in the end. Although, based on this official “ship” video from Marvel Entertainment, I’d say the likelihood is strong!

What are your thoughts on the brewing romance between Daisy Johnson and Daniel Sousa? Let me know in the comments!

4 thoughts on “Daisy Johnson and Daniel Sousa: The Most Surprising TV Romance of the Year”